The Shinjuku Line is one of two main lines of the Seibu Railway system along with the Ikebukuro Line. The two main lines cross at Tokorozawa Station in Tokorozawa, Saitama. The line serves the western suburbs of Tokyo, connecting them to Shinjuku and other areas of downtown Tokyo. 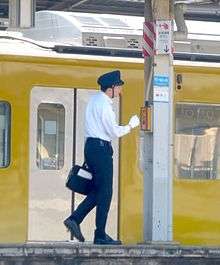 A Seibu Railway train driver at Kami-Shakujii Station, May 2015

The line is mostly double-track, except for 1.1 km of single track between Wakita Junction and Hon-Kawagoe Station. While the section from Seibu-Shinjuku to Takadanobaba is elevated, the line runs at ground level through a suburban area until Saginomiya.

There are regular through operations to the Haijima Line and the Kokubunji Line. There are also occasional through services to Seibu-Kyūjō-mae Station in order to bring fans to the Seibu Dome for Saitama Seibu Lions baseball games. The Seibu Shinjuku Line is one of the few major commuter rail lines in Tokyo that does not have through service to the Tokyo Metro or Toei Subway network.

A fleet of eight 10-car Seibu 40000 series EMUs is scheduled to be introduced from spring 2017, operating on the Seibu Ikebukuro, Seibu Shinjuku, and Seibu Haijima Lines.[3]

The oldest section of the Shinjuku Line is between Higashi-Murayama Station and Hon-Kawagoe Station. This section was built by the Kawagoe Railway (川越鉄道, Kawagoe Tetsudō) to serve as a freight feeder for the Kōbu Railway (甲武鉄道, Kōbu Tetsudō) between Shinjuku and Tachikawa (now known as the Chūō Main Line). The initial Kawagoe Railway route opened between Kokubunji and Kumegawa in 1894; this portion is now known as the Seibu Kokubunji Line. Its northward extension to Kawagoe, the first part of what is now the Seibu Shinjuku Line, opened in 1895. Following several mergers and name changes between 1920 and 1922, the Kawagoe Railway became part of the Seibu Railway.

In 1927, Seibu Railway built its new dual track, electrified at 1,500 V DC, Murayama Line between Takadanobaba Station on the Yamanote Line in Tokyo and Higashi-Murayama Station to compete with Musashino Railway (武蔵野鉄道, Musashino Tetsudō) (present-day Seibu Ikebukuro Line) and the Japanese National Railways Chūō Main Line, the route being in the middle of the two. The rest of the line was electrified at the same time.

In 1952, a dual-track extension from Takadanobaba to Seibu-Shinjuku Station was completed. At this time the line was renamed the Shinjuku Line, integrating the Murayama Line and the northern section of the Kawagoe Line. The new Seibu-Shinjuku terminal was built as a temporary station, as Seibu planned to extend the line to the second floor of what is now known as Lumine Est on the east side of Shinjuku Station. This plan was later scrapped due to insufficient space to handle trains longer than six cars. Seibu-Shinjuku Station was expanded to include a high-rise hotel in 1977.[4]

During the 1960s, Seibu unsuccessfully negotiated with the Teito Rapid Transit Authority to offer through service between the Shinjuku Line and Tozai Line. Seibu's approach was rejected in favor of through operation with the Chuo Main Line.[4]

In the 1980s, Seibu drew up a plan to build an underground line for express trains between Seibu-Shinjuku and Kami-Shakujii, including a new underground station between Seibu-Shinjuku and the Metro Promenade. This plan was indefinitely postponed in 1995 due to costs and a decline in passenger ridership versus previous projections.[4] Seibu was also a bidder to acquire the former JR freight terminal site in 1989, where they planned to build a new underground terminal; Takashimaya won the bid and constructed the Takashimaya Times Square complex on the site.

From the start of the revised timetable on 30 June 2012, the limited-stop Rapid Express (快速急行, kaisoku-kyūkō) services were abolished.[5]

Station numbering was introduced on all Seibu Railway lines during fiscal 2012, with Seibu Shinjuku Line stations numbered prefixed with the letters "SS".[6]