The North Jutlandic Island (Danish: Nørrejyske Ø), Vendsyssel-Thy, or simply Jutland north of the Limfjord (Jylland nord for Limfjorden) are lesser-used names for the northernmost part of Denmark and of Jutland. It is more common to refer to the three traditional districts Vendsyssel, Hanherred and Thy. Although the area is separated from mainland Jutland by the Limfjord, it is traditionally regarded as a part of Jutland rather than an island.

Geographically, it is the second largest island of Denmark after Zealand (excluding Greenland) with a population of 296,700 on 1 January 2014.[1]

Danes rarely refer to the area as a whole, but more often to the three constituent districts or to North Jutland (which also includes an area south of the Limfjord). The adjectives nordenfjords and søndenfjords are commonly used, meaning north and south of the Fjord, respectively. The names can all be considered ad hoc creations, as a traditional name for the island as a geographical unity is lacking.

The North Jutlandic Island was formerly a tied island, connected to the Jutland Peninsula by the narrow sand tombolo of Agger Tange between c. 1200 and 1825. The area became an island again on 3 February 1825, when the North Sea broke through the Agger Tange in its far southwest, cutting off the area from mainland Jutland and creating the Agger Channel.[2] The current separator is the Thyborøn Channel which was created slightly further south by a flood in 1862. The original Agger Channel filled up with sand in 1877.

The syssel was a medieval sub-division which is regarded as the oldest administrative unity in Denmark, existing since prehistoric times (well before 1000 AD). The North Jutlandic Island was divided into two of these, Thysyssel (including Hanherred) and Vendsyssel. 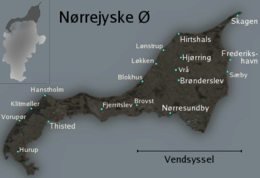 Vendsyssel-Thy: Thy at west, Hanherred (with the towns Fjerritslev and Brovst) in the middle, and Vendsyssel at east and north

The North Jutlandic Island consists of these three traditional regions:

Since 1 January 2007, when the Danish municipal reform took effect, these areas along with Himmerland and the islands of Mors and Læsø have constituted the North Jutland Region, being the smallest of Denmark's five regions by population. Ecclesiastically, the North Jutlandic Island is the core of the Diocese of Aalborg.

In traditional terms, the westernmost part of the island, Thy, is considered part of Northern and Western Jutland simultaneously. The term North West Jutland refers to Thy, Mors, and the parts of mainland Jutland bordering the western Limfjord, such as the peninsula of Salling and around the towns of Struer and Lemvig.