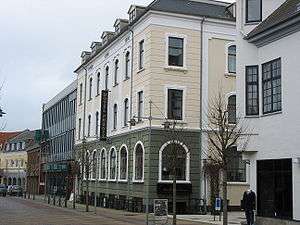 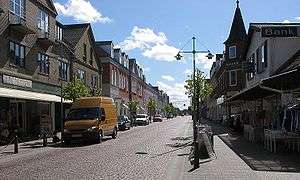 Brønderslev is a town with a population of 12,046 (1 January 2014)[1] located 31 kilometers north of Aalborg. It is the municipal seat of Brønderslev municipality, Vendsyssel in Region Nordjylland, the northernmost part of the Jutland peninsula in northern Denmark.

One of its sister cities is Nässjö, Sweden.

The name of the town is derived from a local Norsemen chief, Brunder.

Southwest of Brønderslev is the large bog of Store Vildmose. The bog is a natural attraction in itself, but it has also revealed many archaeological finds from the Iron Age in particular.

Brønderslev is home to the regional-museum of 'Vildmosemuseet' (The vildmose Museum), concentrating on the cultural-history of Store Vildmose and surroundings. Vildmosemuseet is part of The Museums in Brønderslev Municipality which comprise a total of three museums, all recognized by the State of Denmark. The other two being 'Try Museum' and 'Dorf Møllegård', both in Dronninglund.