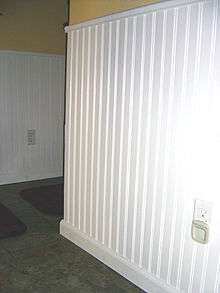 Panelling (or paneling in the U.S.) is a millwork wall covering constructed from rigid or semi-rigid components.[1] These are traditionally interlocking wood, but could be plastic or other materials.

Panelling was developed in antiquity to make rooms in stone buildings more comfortable. The panels served to insulate the room from the cold stone. In more modern buildings, such panelling is often installed for decorative purposes. Panelling, such as wainscoting and boiserie in particular, may be extremely ornate and is particularly associated with seventeenth and eighteenth century interior design, Victorian architecture in Britain, and its international contemporaries. 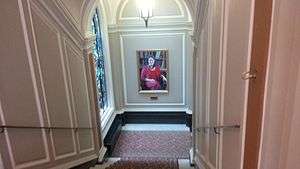 Simple moulded panelling on the walls of a staircase.

Wainscot oak came from large, slow-grown forest trees, and produced boards that were knot-free, low in tannin, light in weight, and easy to work with. It was preferred to home-grown oak, especially in Holland and Great Britain, because it was a far superior product and dimensionally stable.

The Oxford English Dictionary states that it derives from the medieval German wagenschot as well as wageschot or 'wall-board'. Johnson's Dictionary defined it thus:

Wainscot [wageschot, Dutch], the inner wooden covering of a wall.


To wainscot [waegenschotten, Dutch], to line the walls with boards

A 'wainscot' was therefore a board of riven (and later quarter-sawn) oak, and wainscoting was the panelling made from it. During the 18th century, oak wainscot was almost entirely superseded for panelling in Europe by softwoods (mainly Scots pine and Norway spruce), but the name stuck:

"The term wainscoting, as applied to the lining of walls, originated in a species of foreign oak of the same name, used for that purpose; and although that has long been superseded by the introduction of fir timber, the term has been continued notwithstanding the change of material".[3]

Also in the 18th century, the style of panelling changed from a floor-to-ceiling covering to one in which only the lower part of the wall was covered. Hence wainscot or wainscoting became a panelling style applied to the lower 90 to 150 cm (3 to 5 ft) of an interior wall, below the dado rail or chair rail, and above the baseboard or skirting board. It is traditionally constructed from tongue-and-groove boards, though bead-board or decorative panels, such as a wooden door might have, are also common. New manufacturing techniques are capable of milling large panels from one sheet, reducing seams, caulking, and expansion/contraction cracks that have plagued traditional construction. Wainscoting may also refer to other materials used in a similar fashion.

The original purpose of wainscoting was to cover the lower part of walls, which, in houses constructed with poor or non-existent damp-proof courses, are often affected by rising dampness. Its purpose is now decorative.

Elaborate boiseries in the guild hall of the Zunfthaus zu Kaufleuten, Kramgasse 29, Berne

Boiserie (French pronunciation: ​[bwazʁi]; often used in the plural boiseries) is the French term used to define ornate and intricately carved wood panelling.[4] Early examples of boiseries were unpainted, but later the raised mouldings were often painted or gilded. Boiseries were popular in seventeenth and eighteenth century French interior design and the Palace of Versailles has many fine examples. The panels were not confined to just the walls of a room but were used to decorate doors, frames, cupboards, and shelves also. Often pictures would be set into the boiseries, the carving framing the picture rather like a conventional frame.