Yaoundé (US /ˌjɑːʊnˈdeɪ/, UK /jɑːˈʊndeɪ, -ˈuːn-/;[2] French pronunciation: ​[ja.unde]; German: Jaunde) is the capital of Cameroon and, with a population of approximately 2.5 million, the second largest city in the country after the port city Douala. It lies in the centre of the nation at an elevation of about 750 metres (2,500 ft) above sea level.

The outpost of Epsumb or Jeundo was founded between the Nyong and Sanaga rivers at the northern edge of the area's forests in 1887,[3] 1888,[4] or February 1889 by the German explorers Lt. Kund and Tappenbeck by the agreement of the chiefs of Ela Esono.[5] From December 1889 to May 1895, it was occupied by the German botanist Georg August Zenker as an agricultural research station named Jaunde after the local Yaunde or Ewondo people.[7] His settlement served as a base for the area's rubber and ivory trade, purchasing these from the natives in exchange for imported clothing and iron.[4] It was also known in English as Yaunde Station. Major Dominik's establishment of a military garrison at the site in 1895 permitted a Pallotine mission and religious school at nearby Mvolyé (now a suburb).[4]

During World War I, Jaunde was occupied by Belgian troops from the Congo. After Imperial Germany's defeat in that war, France held eastern Cameroon as a mandate of the League of Nations and Yaoundé was chosen to become the capital of the colony in 1922. Douala long remained the more important settlement, but Yaoundé saw rapid growth after 1957 due to the cocoa crisis and unrest along the coast. It continued as the seat of government for the Republic of Cameroon upon its independence.

Most of Yaoundé's economy is centered on the administrative structure of the civil service and the diplomatic services. Due to these high-profile central structures, Yaounde enjoys a relative higher standard of living and security compared to the rest of Cameroon.

Local residents engage in urban agriculture. The city is estimated to have "50,000 pigs and over a million chickens."[8]

In 2010, under Mayor Jean Claude Adjessa Melingui, Yaoundé began a flood reduction project, the Yaoundé City Sanitation Master Plan, to deal with "severe floods [that] disrupted the city 15 to 20 times a year, affecting as many as 100,000 people at a time." After four years, the frequency of flooding had been reduced from fifteen to three times a year, and cases of water-borne diseases such as typhoid and malaria were reduced by almost half. Although Melingui died in 2013, local officials are continuing his efforts to transform the city. Ongoing improvements to sanitation infrastructure are being carried out under a "$152 million plan, largely financed by loans, primarily from AfDB and the French development agency," slated for completion in 2017.[8] 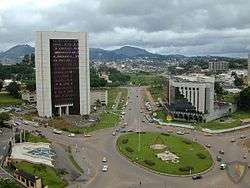 A roundabout near the place du 20 mai

The economy of Yaoundé is dependent on the administrative structure of the civil service and the diplomatic services. Owing to its status as the capital city of Cameroon, it is characterized by higher standards of living and relatively good security as compared to other parts of the country. It is worth noting that the city has several industries that deal with tobacco, dairy products, beer, clay, glass goods, and lumber production. It also provides products like sugarcane, coffee, cocoa, rubber, and copra among others to other regions of the country.

Despite the security issues and humanitarian crises that have plagued the Central African nation, its economy remains stable. In fact, there is diversification of its productive economic activities, with the services sector contributing about half of the total domestic production.[9] However, just like many countries on the continent, Cameroon has been grappling with corruption, which dominates almost all the sectors, particularly in the capital city. Oil, gas, and mining revenues are rarely reported, which implies massive graft.[10] In addition, there is weak protection of real and intellectual property, and the judicial system is vulnerable to political manipulation.

The residents of Yaoundé engage in agricultural activities such as poultry and rearing of pigs. According to Yaoundé City Council data, there has been over 130 floods that have been striking the city from 1980 to 2014, causing massive loss of life and economic damage. However, there has been reduction of flooding in the city since the establishment of a sanitation master plan to address the issue.[11] Another measure was to relocate people living along the drainage routes and in low-lying flood zones. Ongoing improvements to sanitation and infrastructure are being carried out under a “$152 million plan, largely financed by loans, primarily from [null AfDB and French development agency]” and will be completed by 2017.[12]

The city centre houses government offices, some hotels, and the central market. The Bastos district, with most homes owned by Cameroonians, is home to foreign embassies and the expatriate European, American and other continental communities (drawn mainly from the diplomatic corps). The presidential palace and compound is in the Etoudi district.

Also found in Yaoundé are:

There is a small zoo in the Mvog-Betsi neighbourhood. Yaoundé has a small assortment of Pubs, nightclubs and restaurants.

A distance outside Yaoundé is the NGO Ape Action Africa, which rescues and rehabilitates Great Apes threatened with extinction by the illegal bushmeat and deforestation trades.

Yaoundé features a tropical wet and dry climate with constant temperatures throughout the year. However, primarily due to the altitude, temperatures are not quite as hot as one would expect for a city located near the equator. Yaoundé features a lengthy wet season, covering a ten-month span between February and November. However, there is a noticeable decrease in precipitation within the wet season, seen during the months of July and August, almost giving the city the appearance of having two separate rainy seasons. It’s primarily due to the relative lull in precipitation during these two months that Yaoundé features a tropical wet and dry climate, as opposed to a tropical monsoon climate.

Yaoundé Nsimalen International Airport is a major civilian hub, while nearby Yaoundé Airport is used by the military. Train lines run west to the port city of Douala and north to N'Gaoundéré. Many bus companies operate from the city; particularly in the Nsam and Mvan districts. Frequent buses run on the road between Yaoundé and Douala, which has witnessed several fatal accidents. Travel time by road between Douala and Yaounde is approximately 3 hours. Traffic in the city can be heavy during weekdays, but is very light during the weekends. Yaoundé has made significant progress in infrastructure, especially road construction. 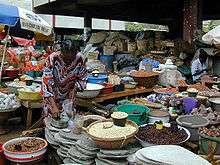 A view of a Yaoundé suburb

There are numerous markets in the city, ranging from small street-side markets to the large Mfoundi and Mokolo market. There are also some supermarkets (e.g. the locally owned 'Rayco' 'Santa Lucia' 'Mahima' and the French-owned Casino) situated in the city centre.

Cameroon is officially a bilingual country, where English and French are both official languages; therefore in the city there is a coexistence of French sub-educational system schools, where the degree giving access to university is baccalaureate, and all the education is in French, and the English sub-educational system schools, where the degree giving access to university is the GCE Advanced level. There are three American schools in Cameroon, the American School of Yaounde (ASOY) and Rain Forest International School (RFIS), and the American School of Douala (ASD). There is also one Turkish School, The Amity College/School. Yaoundé is the site of several universities: the University of Yaoundé I, the University of Yaoundé II (on a campus outside of town), the Protestant University of Central Africa (UPAC) and the Catholic University of Central Africa (UCAC). Several of the nation's professional schools are also located in Yaounde (Higher Teacher's training college, École Militaire InterArmes du Cameroun) as well as various schools for engineers, nurses and diplomats. 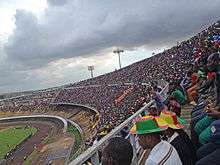 Ahmadou Ahidjo stadium during a match

The national football team plays some of its home matches in the Ahmadou Ahidjo stadium and the football clubs Canon Yaoundé, Impôts FC and Tonnerre Yaoundé are all based in the city. The Grand Prix Chantal Biya, a men's road bicycle racing event on the UCI Africa Tour starts and finishes in Yaoundé.

Yaoundé is also the base for the National Institute of Youth and Sport; this school trains government workers who will be in charge of sport all across the country during their career.