Avadi is a suburb city of Chennai and a municipality in Thiruvallur in the state of Tamil Nadu, India. Situated about 23 km west of Chennai, it is surrounded by major defense establishments. The neighborhood is served by Avadi Railway Station of the Chennai Suburban Railway. As of 2011, the town had a population of 345,996. The Heavy Vehicles Factory (HVF) is located in Chennai Avadi.

The word 'Avadi' has been considered as an acronym for "Armoured Vehicles and Ammunition Depot of India", however this fact has no base since, the defense establishments in Avadi were set up only in the 1960s, whereas the town itself had existed long before this happened and with the same name. The name Avadi actually means in Tamil 'a place filled with lot of cows' ஆ (Aa) = cow + அடி (Adi) = location. 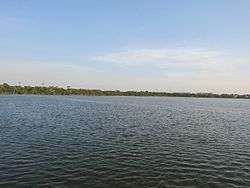 A view of the Avadi lake

Avadi has a lake which lies right behind the Tamil Nadu Housing Board (TNHB). This lake is of length of 2.64 kilometers. It's mostly known to have never dried up in many years. This lake has supposedly been a source of water for cultivation of farm lands long before. The water body attracts many birds during various seasons.However, in the recent decades it has lost most of its area to discriminate building and encroachment.

The famous session of the Indian National Congress was held at Avadi on 10 January 1955.[2] This historical meet emphasised the importance of socialism and its impact on social development. Jawaharlal Nehru with Morarji Desai and other Congress leaders at the AICC session declared that a socialistic pattern of society was the goal of the Congress.[3][4]

In addition to military establishments, Avadi also houses a number of IT/ITES & other service sector based firms. Aristomind, one of the First Start up was from Avadi.

The Indian Air Force has a Mechanical Transport Training Institute Technical (MTTI) here for training its personnel on driving and repairing vehicles and also a base repair depot for repair and maintenance of its various equipment. CVRDE undertakes major research on battle tanks and other combat vehicles. MBT Arjun, armoured ambulance, Combat Improved Ajeya and Nag anti-tank missile are some of the recent products from CVRDE. The Heavy Vehicles Factory produces an indigenous version of the T-72 tank known as Ajeya. HVF also produces the main battle tank Arjun. The production of T-90S Bhishma tanks started in 2006–2007. The Tamil Nadu Special Police (TSP) also has a division in Avadi, the TN 2nd & 5th Battalion.

There was a World War II airfield at Red Hills, Sholavaram approachable from the junction close to the CRPF Camp, Avadi, immediately after the Military Hospital.

There are many Hindu Temples in and around Avadi. Karumari Amman temple, Chinnamman temple, Nagavalli Amman and Perumal temple are very famous temples in Avadi. In addition to this many old generation temples are also present in and around Avadi. Thirumullaivoyal, a locality near Avadi is famous for Masilamaniswara Temple, Thirumullaivoyal an ancient temple of Lord Shiva and also Pachaiamman Temple. Vaikundhanaadhar Temple is located near Kovilpathagai, Angaalamman temple is located in the Redhills road. Sri Venkateswara Perumal Temple in Kamaraj Nagar is a Vaishavite shrine in Avadi.

There are a handful of Mosques serving to a considerable Islamic population in Avadi. Numerous churches have been built in recent decades and St Antony's Shrine is a Catholic church located at Avadi Check-post. There is a Jain temple, Vasupujiya Jain Temple and a Gurudwara in the HVF estate for the Sikhs to worship in Avadi.

Even-though, Avadi boasts of cultural and religious diversity, it has a proud heritage of religious tolerance.

Avadi railway station is one of the terminal station of the Chennai Suburban Railway Network. There are frequent suburban trains from Avadi to Chennai Central, Chennai Beach, Arakonam, Thiruvallur and Tiruthani. Few express trains stop at Avadi.

Avadi bus terminus is located very near to the Avadi Railway station on the Chennai - Thiruvallur High Road (CTH road).

Avadi is well connected to various locations of Chennai as well as rural areas surrounding North-western and Western Chennai. The main service provider though is the state-owned Metropolitan Transport Corporation some private buses are also available.

The Tamil Nadu Highways department issued a GO[9] on 4 October 2013 to extending the entire Chennai – Tirutani highway to 6 lanes at a cost of 1.68 billion. The first phase will involve extending the road to 4 lanes – 100 ft with center median and encroachments have already started to be removed.[10]