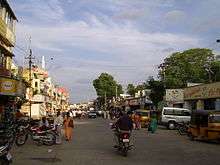 Tambaram is residential locality in Southern part of the metropolitan city of Chennai in the Indian state of Tamil Nadu. Tambaram is a Gateway of South Chennai situated 27 km (17 mi) south of the Broadway in Tamil Nadu, India. It is on the Chennai–Trichy national highway. The highway and the railway line from Chennai Egmore to Kanyakumari divide the town into East Tambaram and West Tambaram. The neighbourhood is served by the Tambaram railway station of the Chennai Suburban Railway Network. Tambaram is described as the Gateway of the Beautiful Metropolitan City of Chennai. As of 2011, the city had a population of 174,787.

Tambaram is also home to the Tambaram Air Force Station of the Indian Air Force.

The earliest references to Manimangalam in the outskirts of Tambaram are in relation to a battle fought between the Western Chalukya ruler Pulakesin II and the Pallava king Narasimhavarman I. The Rajagopala Perumal Temple is one of three Vishnu temples in the town and was constructed by the Medieval Cholas. The earliest inscriptions mentioning the temple are by Rajendra Chola I and have been dated to 1056 CE. Rajendra Chola I refers to the temple as Kamakoti-Vinnagar and Thiruvaykulam.[1]

Originally a camp for the East India Company in the late 17th century during the Carnatic wars,[2][3] Tambaram has its origins in a village of the same name which lay on the outskirts of Chennai city.

In 1936-1937, the Madras Christian College campus was moved to Tambaram heralding development and accelerating the process of inclusion of Tambaram in Madras city. and the first commissioned suburban trains from Tambaram West to Beach. This Municipal Town is also proud of being home to a number of industrial units established at the Madras Export Processing Zone (MEPZ). The units in the MEPZ export various items to several foreign countries thereby earning foreign exchange for the country.

Tambaram is one of the busiest Place in and around Chennai with extensive transport facilities. Tambaram Municipality is also well known for its reputed educational institutions.

Chennai outer ring road, as Central government project is going on to connect Vandaloor and Minjur to reduce the road traffic inside in chennai.

The interim witnessed the most bloodiest war in the history of mankind, for the second time-World War II. The IAF lent its support to UK during the war. KK Majumdar, one of the legendary heroes of the Indian Air Force was rated one of the twelve best pilots of the Allied Air Forces.

The same decade also saw the birth of an Independent India followed by the formation of the Indian Air Force, as we know it today.

The Chennai suburban railway network operates a suburban railway service from Chennai Beach to Tambaram.These lines were electrified as early as November 1931. Southern Railway has set up a coach terminal at Tambaram with pit lines for maintenance, stabling lines and additional platforms.[7]

A new bus terminus in Tambaram has been under construction since December 2010, when 4.26 acres (1.72 ha) of land was allocated to the Metropolitan Transport Corporation (MTC) to set up a bus terminus. Estimated to cost ₹ 56.7 million, it was originally scheduled to be completed by February 2012.[8] When it is completed, the MTC is planning to use the new terminus to operate buses especially to fast-growing suburbs around Tambaram, like Mannivakkam and Ponmar. The second phase of the work is proposed to construct eight more bus shelters.[9][10]

Prior to 1964, Tambaram was a small panchayat. In 1964 it was constituted as a Grade III Municipality comprising the Village Panchayats of Pulikoradu, Kadapperi, Tambaram, Irumbliyur, and Selaiyur. Due to rapid development and growth of the town commercially and residentially, the Municipality is now classified as a 'Selection Grade Municipality'.[12] The extent of the municipality is 20.72 km². The revenue villages under this municipality are Pulikoradu, Kadapperi, Tambaram, Irumbliyur, and Selaiyur. The number of households is 26,333, the number of notified slums is 17 and the number of unnotified slums is 7.[13]

In 2009, Tambaram taluk was trifurcated into Tambaram, Sholinganallur and Alandur taluks. Clubbing all the three taluks, a new revenue division with Tambaram as headquarters was formed.[15]

RTO: Tambaram comes under RTO-TAMBARAM(TN-11). it is one of the largest RTO in Tamil Nadu in terms of vehicle registered.

For decades, Chennai city Region Tambaram was the second largest assembly constituency, next only to Villivakkam. After delimitation, the number of voters has come down to 238,000.

After the completion of the 2007 delimitation by the Election Commission of India, the Tambaram assembly constituency consists of Tambaram Municipality; Town Panchayats of Chitlapakkam, Sembakkam, Madambakkam, Perungalathur, and Peerkankaranai; Census Town Mudichur, and Village Panchayats of Tiruvancheri, Kasbapuram, Vengapakkam, Agaramthen, Kovilancheri, Madurapakkam, Kadaperi and Moolacheri in Tambaram taluk in Chennai city.[16] and Tambaram is now under Sriperumbudur Parliamentary constituency.

Tambaram municipality does not have a common under ground drainage (UGD) system. A ₹ 1060 million UGD project has been commissioned but the residents' welfare associations has raised objections to sewage pumping station in the park in Amal Nagar, filing petitions at the Madras High Court.[2][17]

With the opening of several parks such as Gandhi park in East Tambaram, Thirupur Kumaran park in Selaiyur and Krishna Nagar park and the creating of parks at Burma Colony and Bharathi Nagar, the number of parks within the municipality limits has increased to about 18.[18]

The park at Ganesh Nagar is currently being upgraded with a tiled footpath, a fountain, concrete seating arrangements, play equipment for children, lighting facilities, water taps and a garden with herbal plants.[19] The Gandhi Park in East Tambaram underwent similar renovation and was opened to public in 2015.

The Muthurangam Park located to public after beautification on 15 October 2013 by Mr.T.K.M.Chinnayya, Ex. Animal Husbandry Minister and the sitting MLA of Tambaram Assembly.

Tambaram has two major public libraries. The East Tambaram branch opened in July 1957 and has around 38,145 books. In 2010, ₹1.7 million was allotted to renovate the library. The West Tambaram branch is located on Shanmugam Road and resides among the most busiest places in all of Tambaram.[20]