UberWriter supports formatting with Markdown. It was originally created for the Ubuntu App Showdown, and has since received recognition as one of the Top 10 Ubuntu Apps of 2012[1] 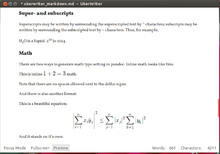 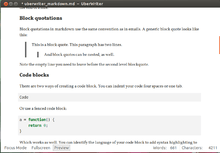 The developer credits the Mac application iA Writer as being the inspiration for UberWriter, and would like to see the two programs become compatible:

A lot of inspiration for UberWriter comes from iA Writer, which is (sadly) only available for Mac OS X users to this date. However, if you like UberWriter and own a mac, please consider buying iA Writer as I do not want to do any harm to them.

I actually would really like to see the two programs being compatible, as iA Writer is also available for iPad and iPhone. As soon as Dropbox Support comes to UberWriter this might happen.