Tiruchengode is a city and municipality located in Namakkal District, in the southern Indian state of Tamil Nadu. The famous Ardhanareeswarar (see Ardhanarishvara) hill temple (one of the 64 manifestations of Lord Shiva, representing the unity of Shiva and Parvati) is situated in Tiruchengode. This ancient temple is mentioned in the Tamil work Silapathikaram as Neduvelkunru. It is also famous for Chenkottu Velavar (Lord Muruga) Temple, which is situated in the same hill. As of 2011, the town had a population of 95,335.

In ancient days, Tiruchengode was known as Thirukodimaadachenkundrur - one of the historic places in Tamil Nadu. It was also known as Thiruchengottankudi Nageswaram. It enshrines the Ardhanareeswarar (man-woman) manifestation of Shiva, representing the unity of Shiva and Parvati, is enshrined in this revered hill temple of great significance, accessible by a motorable road; this is an ancient temple mentioned in the Tamil work, Silappadikaram as Neduvelkunru. The red color of the hill is the reason that it was called Chengode. The image above, shows the view of the surrounding area from the top of the Tiruchengode hill. This temple is regarded as the 4th of the 7 Tevara Stalams in the Kongu Region of Tamil Nadu.

Tiruchengode is in south India in the state of Tamil Nadu, approximately 20 km from the City of Erode, 46 km from Salem, and 120 km from Coimbatore.

Tiruchengode has a more industry oriented occupation rather than agriculture. Agriculture is not done here on a large scale due to lack of abundant water supply as it is solely dependent on the Cauvery river that flows near Pallipalayam, Erode and also dependent on the occasional rains. The major industries here are Rig Spares, Power Looms and Textile Industries, Bus and Lorry Body Building, Lathe Industry, Rice Mills,Granite Factory etc. Tiruchengode is well known for its Rig (Borewell) Lorries. Tiruchengode can be called "The Borewell Hub of India" as it manufactures the largest number of Borewell Vehicles operated in India. 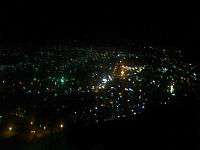 View of the city from T.Gode Tirumalai

Ancient walls, mandapams and sculptured pillars (now in a state of disrepair) add to the awe that this temple perpetuates, on top of the hill. The motorway and the renovated Rajagopuram are of recent origin. True to the name Nagagiri, there is a 60 ft long snake carved on the hill.

Although the sanctum faces the West, entrance to it is from the South. A majestic image of Ardanareeswarar adorns the sanctum. There is a water spring at the foot of the image which is said to have been divinely manifested (Uli Padaa Uruvam). There are inscriptions here from the times of Parantaka Chola, Gangaikonda Chola, the Vijayanagar and Mysore Kings and the Nayaks.

kannagi after burning madurai finally reached thiruchengode hill and she was taken by pushpak viman and went to heaven. and kannagi vizhla is celebrated with pomp and glory every year.

Uttsavamurti of this temple is in the Cleveland Museum of Art, Cleveland, USA.[5]

Tiruchengode's major Festival is the Arthanareeswarar Car Festival known as Vaigasi Visakam (Celebrated during the Tamil month of Vaikasi). The Festival is celebrated for 15 days, with separate cars carrying sengottuvelavar, arthanareeswarar and many small lords. This festival is very famous among the nearby surrounding towns and villages.

Mobile and landline communications are well connected in tiruchengode having exchanges in Tiruchengode and Kootappalli. Mobile connection having 3G GSM services of all major networks.

Another Page Of Tiruchengode