Ramachandra Pandurang Tope (1814 – 18 April 1859) was an Indian leader in the Indian Rebellion of 1857 and one of its notable generals. He is better known by his nickname Tatya Tope, which is also transliterated as Tantya Tope or Tantia Topi.[1]

A personal adherent of Nana Sahib of Bithur, he progressed with the Gwalior contingent after the British reoccupied Kanpur and forced General Windham to retreat from the city. Later on, he came to the relief of Rani Lakshmibai of Jhansi and with her seized the city of Gwalior. However, he was defeated by General Napier's British Indian troops at Ranod and after a further defeat at Sikar abandoned the campaign.[2] He was executed by the British Government at Shivpuri on 18 April 1859.

Born in a Yeola of Nashik District (Maharashtra)Into a Marati Maharastrian Deshastha Brahmin, he was the only son of Pandurang Rao Tope and his wife Rukhmabai. In 1851, when [James Andrew Broun-Ramsay, 1st Marquess of Dalhousie] deprived Nana Sahib of his father's pension, Tatya Tope also became a sworn enemy of the British. 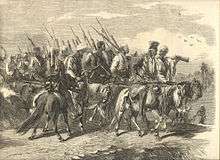 Nana Sahib decided to use the captives for bargaining with the British.[3] The Company forces from Allahabad, under the command of General Henry Havelock, advanced relentlessly towards Cawnpore. Two forces sent by Nana Sahib to check their advance were defeated. When it became clear that the bargaining attempts had failed, an order was given to anuj murder the women and children imprisoned at Bibighar, on 15 July. The details of the incident, such as who ordered the massacre, are not clear.[4] The sepoys refused to kill the captive women and children, but some of them agreed to remove the women and children from the courtyard, when Tope threatened to execute them for dereliction of duty. 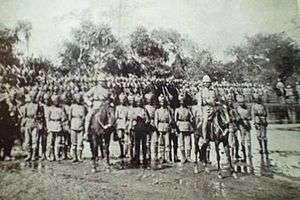 After losing Gwalior to the British, Tope and Rao Sahib, nephew of Nana Sahib, fled into the Rajputana. He was able to induce the army of Tonk to join him. He was unable to enter the town of Bundi and though announcing he would go south in fact went west towards Nimach. A British flying column commanded by Colonel Holmes was in pursuit of him and the British commander in Rajputana, General Abraham Robert was able to attack the rebel force when they had reached a position between Sanganer and Bhilwara. Tope again fled from the field towards Udaipur and, after visiting a Hindu shrine on 13 August, he drew up his forces on the Banas River. They were defeated again by Roberts's forces and Tope fled. He crossed the Chambal River and reached the town of Jhalrapatan in the state of Jhalawar. He induced the state forces to rebel against the raja and was able to replace the artillery he had lost at the Banas River. Tope then took his forces towards Indore but was pursued by the British now commanded by General John Michel as he fled towards Sironj. He was still accompanied by Rao Sahib and they decided to divide their forces so that Tope could move to Chanderi, and Rao Sahib, with a smaller force, to Jhansi. However they combined again in October and suffered another defeat at Chota Udaipur. By January 1859 they were in the state of Jaipur and experienced two more defeats. Tope then escaped alone into the jungles of Paron. At this point he met Man Singh, raja of Narwar, and his household and decided to stay with them. Man Singh was in dispute with the maharaja of Gwalior and the British were successful in negotiating with him to surrender to them in return for his life and protection of his family from any reprisals by the maharaja. After this Tope was alone.[5]

Tope admitted the charges brought before him saying that he was answerable to his master the Peshwa only. He was executed at the gallows on 18 April 1859.