Lincoln's nomination was a surprise, as the favorite before the convention had been former Governor of New York and U.S. Senator William H. Seward. Lincoln's campaign manager, David Davis, is credited for Lincoln's victory over Thurlow Weed, Seward's campaign manager.

Lincoln-Hamlin went on to defeat three other major tickets that year, including Democratic nominee Stephen A. Douglas, U.S. Senator from Illinois. 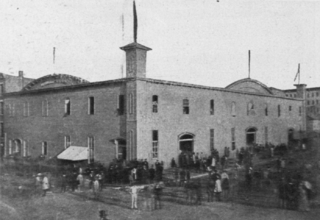 Rare photograph of the wooden frame "Wigwam" building specially designed and constructed for the 1860 Republican Convention in Chicago.

By 1860 the dissolution of the Whig Party in America had become an accomplished fact, with establishment Whig politicians, former Free Soilers, and a certain number of anti-Catholic populists from the Know Nothing movement flocking to the banner of the fledgling anti-slavery Republican Party. While the Republican Presidential effort on behalf of the 43-year-old Colonel John C. Frémont in the 1856 election had met with failure, party gains were made throughout the Northern United States as the sectional crisis over slavery intensified.

Party leaders sought to hold their 1860 nominating convention in the burgeoning Middle Western trade center of Chicago, then a city of little more than 110,000 people. Unfortunately, the growing city did not at that time have a meeting hall of sufficient size for a national political convention, so an appropriation was made for the construction of a new temporary wooden frame assembly hall to seat 10,000 delegates, guests, and observers — a facility known as the "Wigwam".[1] The rapidly designed and constructed building proved well fit for the purpose, featuring excellent lines of sight and stellar acoustics, allowing even an ordinary speaker to be heard throughout the room.[2]

The Convention commanded the interest and attention of a multitude of curious citizens who crowded the "Wigwam" to the rafters. Delegations were seated by state and the gathering was virtually devoid of Southern participation, with no delegations attending from the slave states of North Carolina, South Carolina, Tennessee, Arkansas, Georgia, Alabama, Mississippi, Louisiana, and Florida.[3]

Delegation voting strength was loosely based upon the size of each state's congressional delegation, subject to some modification by the Credentials Committee, with the Northeastern delegations of New York (70), Pennsylvania (54), Massachusetts (26), and New Jersey (14) constituting the largest regional bloc, surpassing the Midwestern states of Ohio (46), Indiana (26), Illinois (22), and Iowa (8).[4] Some 86 votes were apportioned to the six states of New England.[4] Slave and border states with substantial delegations under the rules (but with small actual party organizations) included Kentucky (23), Virginia (23), and Missouri (18).[4] The total of all credentialed delegate votes was 466.[5]

With the convention called to order on May 16, former U.S. Representative David Wilmot of Pennsylvania was elected temporary chairman of the gathering. He had been the author in 1848 of the Wilmot Proviso which would have banned slavery from new states incorporated into the Union.[2] Upon his election, Wilmot delivered the keynote speech to the Convention, in which he declared that:

A great sectional and aristocratic party, or interest, has for years dominated with a high hand over the political affairs of this country. That interest has wrested, and is now wresting, all the great powers of this government to the one object of the extension and nationalization of slavery. It is our purpose, gentlemen, it is the mission of the Republican Party and the basis of its organization, to resist this policy of a sectional interest.... It is our purpose and our policy to resist these new constitutional dogmas that slavery exists by virtue of the constitution wherever the banner of the Union floats.[6]

Organizational tasks filled the rest of the first day's activities, including the appointment of a Credentials Committee and a Resolutions Committee.[2] There were no contested seats although a delegation purporting to represent the state of Texas was ruled ineligible by the Credentials Committee.[2] A Platform Committee was also named, including one delegate from every state and territory in attendance.[2] This committee began its work at once and completed its task with a report on the evening of the second day, May 17.[2]

The reading of the platform, as drafted by the Platform Committee chaired by Judge William Jessup of Pennsylvania, was received with stormy applause and an immediate move followed to adopt the document unanimously and without amendments.[2] An effort followed to amend the platform after adoption with insertion of famous language from the Declaration of Independence that "All men are created equal; and they are endowed by their Creator with certain inalienable rights..."[2] This Amendment was initially rejected by the convention, prompting a walkout by its proposer, long time Ohio Congressman Joshua Reed Giddings.[2] The matter was hastily reconsidered by the Convention, and with the addition of the amendment the disgruntled Mr. Giddings returned to his seat, crisis resolved.[2]

The 1860 Republican platform consisted of 17 declarations of principle, of which 10 dealt directly with the issues of free soil principles, slavery, the Fugitive Slave Act, and the preservation of the Union, while the remaining 7 dealing with other issues.

Clauses 12 through 16 of the platform called for a protective tariff, enactment of the Homestead Act, freedom of immigration into the United States and full rights to all immigrant citizens, internal improvements, and the construction of a Pacific railroad.[7]

In addition to the preservation of the Union, all five of these additional promises were enacted by the Thirty-seventh Congress and implemented by Abraham Lincoln or the presidents who immediately succeeded him. 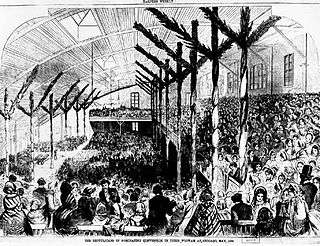 Drawing of the Wigwam interior during the 1860 nominating convention. Note the second story gallery and curved ceiling structure to allow for better acoustics.

The convention met in mid-May, after the Democrats had been forced to adjourn the 1860 Democratic National Convention in Charleston, South Carolina, without a nominee and had not yet re-convened in Baltimore, Maryland. With the Democrats in disarray and with a sweep of the Northern states possible, the Republicans were confident of victory. Senator William H. Seward of New York was generally expected to get the nomination.

As the convention developed, however, it was revealed that Seward, Chase, and Bates had each alienated factions of the Republican Party. Delegates were concerned that Seward was too closely identified with the radical wing of the party, and his moves toward the center had alienated the radicals. Chase, a former Democrat, was opposed by many of the former Whigs who had become Republicans, was thought to be too radical on slavery, had opposed tariffs wanted by Pennsylvania manufacturing interests, and critically, had opposition in his own delegation from Ohio. Bates outlined his positions on extension of slavery into the territories and equal constitutional rights for all citizens, positions that alienated his supporters in the border states and southern conservatives. German-Americans in the party opposed Bates because of his past association with the Know-Nothings.

It was essential to carry the West (what would today be considered the Middle West), and Lincoln was a prominent Westerner. He had a national reputation from his debates and speeches, in which he eloquently opposed slavery while avoiding any of the radical positions that could alienate moderate voters. He had the support of the Illinois and Indiana delegations before the convention, and was the strongest candidate other than Seward.

Nonetheless, Seward's prestige appeared likely to carry him to the nomination.

Lincoln was represented at the convention by his friends Leonard Swett, Ward Hill Lamon, and David Davis. During the night of May 17–18, they worked frantically to win anti-Seward delegates for Lincoln. They showed that Lincoln already had the most support after Seward, which persuaded some. They also made a deal with Simon Cameron of Pennsylvania, who recognized that he had no chance of winning the nomination himself. Cameron controlled the Pennsylvania delegation, and he offered to trade his support for the promise of a cabinet position for himself and control of Federal patronage in Pennsylvania. Lincoln did not want to make any such deal; from Springfield, he telegraphed to Davis "I authorize no bargains and will be bound by none".[8] Despite this restriction, Davis reached an understanding with Cameron, which eventually led to Cameron's appointment as Secretary of War.

The next day (May 18), when voting for the nomination began, Seward led on the first ballot with Lincoln a distant second. But on the second ballot, the Pennsylvania delegation switched to Lincoln, putting him in a near-tie with Seward. On the third ballot many additional delegates switched to Lincoln, and he won the party's nomination.[9]

Among other accounts, an article, entitled "The Four Votes", published in the May 19, 1860, edition of the Chicago Press and Tribune attests that after seeing how close Lincoln was to the 233 votes needed, Robert K. Enos, a member of the Ohio delegation, was responsible for getting three fellow Ohio delegates to shift their four votes to Lincoln. This triggered an avalanche towards Lincoln with a final count of 364 votes out of 466 cast.[10]