Trumbull is a town in Fairfield County, Connecticut bordered by the towns of Monroe, Shelton, Stratford, Bridgeport, Fairfield and Easton. The population was 36,018 according to the 2010 census.[1]

Originally home to the Golden Hill Paugussett Indian Nation, Trumbull was colonized by the English during the Great Migration of the 1630s as a part of the coastal settlement of Stratford, Connecticut.

The northwest farmers of Stratford petitioned the Colony of Connecticut in 1725 to establish their own separate village apart from Stratford. The farmers wished to call their village Nickol's Farms, after the family that owned a large farm in its center, but the village was named Unity. Unity merged with the village of Long Hill (organized in 1740) in 1744 to form the Society of North Stratford.

The Pequonnock River is the only major waterway in Trumbull, beginning northwest of Old Mine Park at the Monroe border and flowing southeasterly through the Pequonnock River Valley State Park, Trumbull Center and Twin Brooks Park.[3] The river leaves Trumbull and continues into Beardsley Park in Bridgeport.

According to the U.S. Geological Society, at 615 ft Monitor Hill (Tashua Hill) in Trumbull is the highest coastal point on the east coast of the United States. Marked with a plaque on Monitor Hill Road.

There were 11,911 households out of which 37.5% had children under the age of 18 living within them, 71.7% were married couples living together, 7.4% had a female householder with no husband present, and 18.5% were non-families. 16.2% of all households were made up of individuals and 9.6% had someone living alone who was 65 years of age or older. The average household size was 2.82 and the average family size was 3.17.

There were 12,338 households out of which 40.9% had children under the age of 18 living within them, 69% were married couples living together, 7.9% had a female householder with no husband present, and 18.8% were non-families. 17.7% of all households were made up of individuals and 11.1% had someone living alone who was 65 years of age or older. The average household size was 2.90 and the average family size was 3.31.

The town's Bicentennial fountain is located at the corner of Quality Street and Church Hill Road (Connecticut Route 127), near the main branch of the library and the town hall. It features the Trumbull town seal and a memorial plaque of donors. In 1997 a time capsule was laid at the base of the Bicentennial Fountain with an opening date of October 12, 2097, Trumbull's tricentennial.[11] 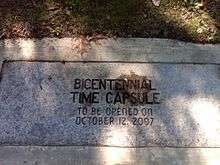 On the National Register of Historic Places

The Westfield Trumbull Mall is located on Route 111, or Main Street, on the town boundary with Bridgeport, has over 180 stores including Target, J.C. Penney and Macy's.

The Hawley Lane Mall is located on Hawley Lane south of Route 8 on the town boundary with Stratford, features Best Buy, Kohl's and Target.[36]

Located north of the Merritt Parkway and east of Route 8 near the town boundary with Shelton and Stratford, 93,000 square feet (8,600 m2) of commercial space is zoned and includes offices for large firms such as Helicopter Support, Sun Products, Unilever, and United Healthcare.[37] It is also home to the Market Integrity office of the NASDAQ OMX Group.[38]

Adaptive reuse has been adopted to permit the reuse of all antique structures situated on state numbered roads which have been previously occupied by a non-conforming use, or are deemed historic by the town, and for which uses allowed by the existing zones are no longer viable - resulting in structures that may become badly maintained, under-utilized, vacant or demolished by neglect.[41]

The town amended its Municipal Code effective on October 1, 2012 to establish a Blight Prevention Ordinance pursuant to Section 7-148(c) (7) (H) (xv) of the Municipal Powers Act of the State of Connecticut General Statutes. This new ordinance encourages the rehabilitation of blighted premises by prohibiting any owner(s), or occupant(s) of real property from; allowing, creating, maintaining or causing the creation or maintenance of a blighted premises.[42]

The town's grand list assesses the taxable value in Trumbull at $5.114 billion, with a mill rate of 30.71 percent. The cumulative value of Trumbull real estate is $4.615 billion.

Public schools are managed by the Trumbull Public Schools System and include approximately 6,955 students, 450 teachers and 240 staff. The district has been ranked 18th (of 164) in Connecticut by the National Center for Education Statistics.[43]

Trumbull provides adult education in a variety of subjects at Trumbull High School, typically in the early evening.[49]

Trumbull EMS is an all-volunteer organization founded in 1976. Trumbull EMS Headquarters is at 250 Middlebrooks Avenue.[50] EMT-B and EMT re-certification classes are regularly offered.

Firefighting in the town of Trumbull is served by three independent and all-volunteer fire departments. Each fire department handles its own tax structure and fund raising, but receives no funding from the town. There are a total of seven fire stations, equipped with and an apparatus fleet of nine engines, three trucks (including one ladder tender/air truck), one quint, three rescues, one squad engine, one satellite maxi-water unit, one fire boat, one town-wide command trailer, five utility units, and numerous support units. The current Town Fire Marshal is Megan Murphy.[51]

The Trumbull Police Department was created in 1941 through an act of the State Legislature. It is under the jurisdiction of a six-member Board of Police Commissioners appointed by the First Selectman. The department currently has seventy officers and ten civilian workers, including the dog warden. The current Chief of Police is Thomas Kiely. The police department is located at 158 Edison Road.[52] The 2009–2010 revised departmental budget is $6,819,421.00.[33]

There are two branches of the library:

The town of Trumbull features over twenty houses of worship representing numerous faiths.

The Church of Jesus Christ of Latter-day Saints, located on Bonnieview Dr., across from the Westfield Trumbull Mall

Trumbull is served by the following local media outlets: