Gino Bartali, captain of the Italian team, threatened and assaulted by some French supporters accusing him to have caused Jean Robic's fall on the Col d'Aspin, retired after winning the 12th stage from Pau to Saint-Gaudens and left the race together with all the other Italian riders (including Fiorenzo Magni, who was wearing the yellow jersey).[1] The lead transferred to Swiss cyclist Ferdinand Kübler, who was able to keep the lead until the end of the race. Kübler became the first Swiss winner of the Tour de France.

Algerian-French cyclist Abdel-Kader Zaaf became famous in this Tour de France by being so disoriented that he rode in the wrong direction.

The "interest" for the yellow jersey (the prize money for the leader of the general classification after each stage) was increased to 100.000 French Francs.[1] In 1949, the French TV had reported every evening about the Tour de France, and in 1950, live coverage of every stage was given.[2] The time cut-offs, the maximum time a cyclist was allowed to finish a stage, was reduced.[3]

In the previous years, the Tour de France had been decided in the mountains. The organisation wanted the other aspects of the race to be more important, so some mountains were not visited in 1950, and the time bonification for cyclists that reached mountain tops first was reduced. from 1 minute in 1949 to 40 seconds in 1950.[4]

The riders had sometimes been helped by team assistants who directly assisted the riders by pushing them from within the team cars, under the pretence of supplying them with a drink. In 1950, the Tour organisation paid extra care for this, and penalized the cyclists if it happened.[5] 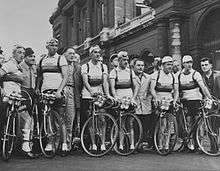 The Dutch team at the start of the race in Paris

As was the custom since the 1930 Tour de France, the 1950 Tour de France was contested by national and regional teams. The three major cycling countries in 1950, Italy, Belgium and France, each sent a team of 10 cyclists. Other countries sent teams of 6 cyclists: Switzerland, Luxembourg and the Netherlands. Italy and Belgium also sent two extra teams of young riders of 6 cyclists each. The French regional cyclists were divided into five teams of 10 cyclists: Paris, Ile de France–North East, West, Centre–South West and South East. Originally, the plan was to have one extra international team of six cyclists with Spanish cyclists,[6] but this extra team became a North African team, with Moroccan and Algerian cyclists; at the time, portions of Morocco were a French protectorate, and Alergia was an integral part of France. This was the first African team to compete in the Tour de France.[7] Altogether this made 116 cyclists.[8]

There were 60 French cyclists (of which 2 French-Moroccan and 4 French-Algerian), 22 Italian, 16 Belgian, 6 Dutch, 6 Luxembourg and 6 Swiss cyclists.[9] On the first day of the race, before the Tour had started, French cyclist Charles Coste was replaced by Paul Giguet.[4]

The winner of the previous Tour de France, Fausto Coppi, was injured during the 1950 Giro d'Italia, so he could not defend his title.[1] Still the Italians were favourites, especially Gino Bartali, who had come second in the 1950 Giro d'Italia behind Hugo Koblet, who did not enter the 1950 Tour de France. Other candidates for the victory were Bobet, Kübler, Ockers and Geminiani.[10] Two days before the Tour started, the organisation held a poll amongst 25 journalists, who each gave their eight favourites for the victory. Bartali was on the most lists, 23. Robic was written on 20 lists, Lauredi on 19, Bobet and Goldschmidt on 17.[11]

The start of the 1950 Tour de France was given on 13 July by Orson Welles.[1] Things started well for the Italian team, as they won five of the first ten stages,[14] although the yellow jersey for the leader of the general classification was exchanged between Luxembourgian Jean Goldschmit and French Bernard Gauthier. 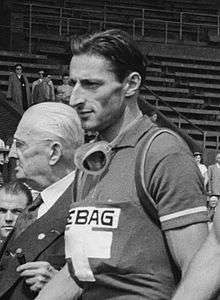 The sixth stage was won by Swiss cyclist Ferdinand Kübler. During the race, Kübler had changed jerseys, which gave him 25 seconds penalty time.[15]

In the eleventh stage, the first mountain stage of the race, Gino Bartali was away together with French Jean Robic. There was a lot of crowd, and they pressed forward to see the cyclist coming.[16] This caused Bartali to fall down during the descent of the Col d'Aspin, and this caused Robic to also fall down.[14] Bartali got up and won the stage, but felt threatened by spectators, who punched and kicked him. One spectator had threatened Bartali with a knife.[16] Bartali told his team manager Alfredo Binda that he was leaving the Tour de France, and that all Italian cyclists should abandon the race.[17] Not all Italian cyclists wanted to leave: the members from the second Italian team (the Italian Cadets) and Adolfo Leoni wanted to stay. Some Italian cyclists said they wanted to stay in the race to help Magni defend the leading position.[17] Magni felt bad about giving up the chance to win the Tour de France, but accepted the decision.[18] The Tour organisation wanted to keep the Italian cyclists in the race, and among other compromises offered to give them neutral gray jerseys, so the spectators would not recognize them.[17] None of this helped, and both Italian teams left the race. As a consequence, the fifteenth stage, that was originally scheduled to end in Italy (Sanremo), was rescheduled to end in Menton.[3]

With Magni out of the race, Swiss Ferdinand Kübler became the new leader of the general classification, closely followed by Bobet and Geminiani. Out of respect for Magni, Kübler did not wear the yellow jersey (indicating the leader in the general classification) in the 12th stage. In the twelfth stage, all the favourites finished together. That stage was won by Belgian Maurice Blomme, but not without difficulties: he was so exhausted that he mistook a dark shadow for the finish line, and stopped racing. The secretary of the Tour de France, Jean Garnault, had to put him back on his bicycle so he would ride the last meters of the stage.[20]

In that stage thirteen, the temperature was extremely high. Two riders from the North African team, Marcel Molinès and Abdel-Kader Zaaf, broke away after 15 kilometers, and created a large gap, also because the other cyclists were more occupied with getting drinks.[21] Some 20 kilometers from the finish, Zaaf started to zigzag across the road. A safety official pulled him from the race, afraid for his safety, and Molinès rode through alone. Zaaf did not agree with the safety official, and mounted his bicycle again. He quickly fell off his bicycle and fell asleep, and spectators moved him into the shade of a tree.[21] When he woke up, he realized that he was in a race, got on his bicycle again and rode away, but going into the wrong direction. An ambulance was called, and Zaaf was taken away. Zaaf claimed that he had received wine from a spectator, and as a Muslim he was not used to the alcohol.[17] Behind the two North-African cyclists, Kübler had attacked, and left his rivals Raphaël Géminiani and Louison Bobet minutes behind.[14] Of the favourites, only Ockers managed to stay with Kübler.

In stage fifteen, it was still hot, and the riders were not motivated to race. They stopped during the race to cool down in the Mediterranean Sea, but were quickly ordered by Jacques Goddet to continue the race.[17] The journalists that followed the race reported on this in a humorous way, and the organisation therefore fined them.[22]

In the sixteenth stage, Ockers and Bobet finished shortly after Kübler. The Tour de France jury said Bobet came in second, and gave him the 30 seconds bonification time, but the Belgian team manager Sylvère Maes protested against this decision, because he argued that Ockers came in second. Maes threatened to take the Belgian team out of the race, but the Tour direction did not change their decision. In the end, the Belgian team stayed in the race.[23]

Second placed rider in the general classification, Ockers was unable to win back time in later stages, so Kübler stayed in the lead for the rest of the race, and became the first Swiss winner of the Tour de France.

Kübler's victory is seen as partially his own accomplishment, but also partially due to the absence of Fausto Coppi and the withdrawal of the Italian teams.[24] According to Kübler, it became more difficult to win the race after the Italians had left the race, because the attention was no longer focussed on the Italians, but on Kübler. Kübler felt that he would have been able to win the 1950 Tour de France if the Italians would have not abandoned, because he was the best in the time trials.[25] 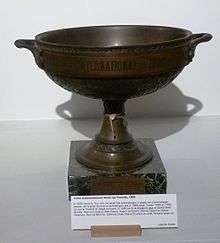 The team classification trophy for 1950, won by the Belgium team

The time that each cyclist required to finish each stage was recorded, and these times were added together for the general classification. If a cyclist had received a time bonus, it was subtracted from this total; all time penalties were added to this total. The cyclist with the least accumulated time was the race leader, identified by the yellow jersey. The total prize money in the 1950 Tour de France was 14 million French Francs; 1 million French Francs were for the winner of the general classification.[1] Of the 116 cyclists that started the 1959 Tour de France, 51 finished the race.

The team classification was calculated by adding the times in the general classification of the best three cyclists per team. It was won by the Belgian team, with a large margin over the French team. Of the other four teams that started, the two Italian teams had abandoned the race, and the North African team finished with only two riders and the Dutch team with only one rider, therefore they were ineligible for the team classification.

The special award for the best regional rider was won by sixth-placed Kléber Piot.[1]

The French-Algerian cyclist Zaaf, who fell out in the thirteenth stage after riding into the wrong direction, became famous, and got to ride in many criteriums, until he left two years later to Algeria.[21] Kübler did not enter the next three Tours de France, but when he returned in 1954, he finished in second place, and won the green jersey for the points classification.