The second win by Nicolas Frantz, he held the yellow jersey from beginning to end despite an obstacle in three days before the end of the tour. Frantz had a mechanical failure between Metz and Charleville and had to finish 100 km of race on an undersized women's bicycle resulting in a loss of 28 minutes. Regardless, Frantz won the tour, showing the superiority of his team, Alcyon, which gained the team trophy,[1] and also had second best man André Leducq.

The 22nd tour featured the first appearance of an Australian/New Zealand team, indicating the beginning of a more international sporting field.[2][3] Their experience was turned into a film by Phil Keoghan, released in July 2016.

Tour director Henri Desgrange allowed teams to replace exhausted or injured cyclist by new cyclists, to give the weaker teams a fairer chance. However, the effects were opposite, so the concept was quickly abandoned.[3]

In the 1927 Tour de France, the team time trial format had been introduced, where teams started 15 minutes separated. This was done to make the flat stages more competitive. Although in 1927 this had not been successful, the formula was repeated in 1928; this time the teams started 10 minutes from each other.[4]

The team time trial format had been an advantage to the strong teams; therefore the tour organisation invented a new rule, aimed to help the weak teams: the teams were allowed to replace cyclists in the beginning of stage 12, halfway through the competition.[1] They were not eligible for the general classification.

Another new rule thing were the regional teams. The riders were separated in three groups: there were eight trade teams, nine regional teams of five riders and the touriste-routiers, without teams.[5]

In other years, the mountain stages, especially in the Pyrenees, had decided the race. To reduce the importance of these stages, the Tour organisation had changed the route of the first mountain stage, that had been the same since 1913. Two mountains, the Aspin and the Peyresourde, were left out of the stage.[4] 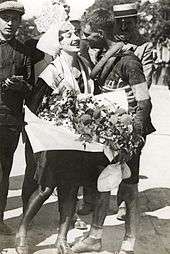 The tour also saw the introduction of the Australian/New Zealand team, sponsored by Ravat. It was headed by Hubert Opperman, who had been the Australian cycling champion for a few years. After The Melbourne Herald had a campaign to send Opperman to the Tour de France, a team was made. The plan was to add six experienced European cyclists to the team, but this did not happen.[6] Opperman rode some races in Europe and could compete with the European top cyclists, but the rest of his team could not. Because a major part of the race was in the team time trial format, Opperman had no chance to win the Tour.[4] The Kennett Brothers wrote a book about the New Zealander on the team—Harry Watson—that was read by cycling enthusiast and The Amazing Race-host Phil Keoghan, who was surprised that he had never heard of the fellow Cantabrian before. Keoghan decided to celebrate the team's achievement and with a friend, he rode the 1928 stages on period bicycles to the original 26-day schedule. Their experience was turned into a film, Le Ride, which premiered in July 2016 in Watson's home town Christchurch.[7][8]

Altogether, 162 cyclists started the race, at that time a new record.[4] 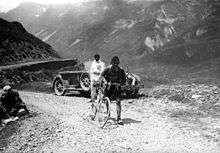 The Belgian Maurice Geldhof is climbing part of the Aubisque on foot.

In the first team-time-trial like stages, the Alcyon team emerged the best. The individual Touriste-routiers could not compete to the professional teams. The Alcyon team finished first in five of the eight stages. Nicolas Frantz, the winner of the previous tour, crossed the finish line first in the first stage, and was leading the classification, and kept the lead during these stages.[4] After the first eight stages, Frantz was leading the race, followed by his team mate Maurice De Waele in 99 seconds. Julien Vervaecke, the Belgian from the Armor team, followed in third place, 225 seconds behind.[1]

In stage 9, the first mountain stage, Frantz did not crush the competition as he had done on previous year. Instead, Victor Fontan, who was more than one and a half hour behind in the general classification,[9] was allowed to escape and win the stage.[4] Frantz still finished second, seven minutes behind, and extended his lead on his direct competitors, and was now leading by more than 40 minutes.[1] In the tenth stage, the Alcyon team-mates Leducq, Frantz and De Waele finished first, and they now had the first three places in the general classification.[1]

Next came the alps. Here, Frantz increased his lead. Behind him, De Waele gained time on Leducq, and was now in second place. After the alps, the three Alcyon cyclists still held the first three places in the general classification, with Frantz comfortably leading by more than 75 minutes. In the 19th stage, Frantz bicycle frame broke, when he rode over a railroad track.[4] His sponsor, Alcyon, did not like the bad publicity, and wanted Frantz to go to an Alcyon dealer and get a replacement bike. The team manager from Alcyon was against this idea, because this would cause a major time loss, and maybe even the loss of the Tour de France. According to some sources, they found a bicycle shop that only had one bicycle left, an undersized women's bicycle, and they decided to take it.[10] Other sources say that when they were thinking what to do, Frantz spotted a woman with a bicycle, and persuaded her to give him her bike. Frantz rode the last 100 km on this undersized women's bicycle, and did this with 27 km/h, whereas the winner of the stage had 34 km/h.[1][4] His lead dropped with 30 minutes, but he was still leading the race.

In the 21st stage, Antonin Magne and Francis Bouillet had escaped together, and it was Bouillet who won the sprint. This was a problem for the Tour organisation, as Bouillet had already left the race in stage 9, to start again as a replacement in stage 12. Hence, he was no longer eligible for the general classification, and could not be the winner of a stage. The Tour organisation solved the problem by giving Bouillet the best time and proclaiming him the moral winner of the stage, and making Magne the official winner of the stage.[11]

In stages 1 to 8 and 15 to 21, the cyclists started in teams.[1] The cyclist who reached the finish fastest was the winner of the stage. In the other stages, all cyclists started together. The time that each cyclist required to finish the stage was recorded. For the general classification, these times were added up; the cyclist with the least accumulated time was the race leader, identified by the yellow jersey. 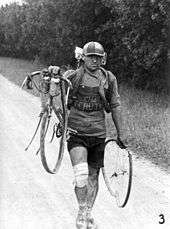 Italian Giusto Cerutti has a broken wheel after a fall. According to the rules he is not allowed to accept help.

The organising newspaper, L'Auto named a meilleur grimpeur (best climber), an unofficial precursor to the modern King of the Mountains competition. This award was won by Victor Fontan.[16]

The team time trial method had not given the desired result; in the 1929 Tour de France it was only used if the previous stage had been too slow, and after 1929 it disappeared. The rule with replaced cyclists did not even make it until the next year.[17]