The number of stages decreased from 24 to 21. The total distance also decreased, so the average length per stage remained about the same, 215 km (compared to 160–170 km in modern Tours).[6]

The French team of the 1932 Tour de France

For the third year, the race was run in the national team format, with five different teams. Belgium, Italy, Switzerland and France each sent a team with eight cyclists, while Germany and Austria sent a combined team, with seven German cyclists and one Austrian cyclist. In addition, 40 cyclists joined as touriste-routiers.[4]

Charles Pélissier, who had won 13 stages in the 1930 and 1931 Tours, and Antonin Magne, the winner of 1931, were absent from the French team. Still, there were so many good French cyclists in that time that the French team was still considered superior.[6]

The Belgium team had Jef Demuysere, who had fought for the victory in the previous Tour until the end and had become second, and two-time world champion Georges Ronsse.

Cyclists climbing the closed barrier of a railway crossing.

In the first stage, the Belgians had a good start. Jean Aerts won the stage, with Jef Demuysere in second place. In the second stage, there were struggles in the Belgian team between the Dutch-speaking and the French-speaking cyclists.[6] Aerst, Dutch-speaking, did not get the support from his French-speaking team mates, and lost ten minutes in that stage, together with the Italian favourites.[6] German Kurt Stöpel won the stage, and donned the yellow jersey, thanks to the bonification. Stöpel was the first German cyclist to lead the general classification in the Tour de France.[1] In the third stage, the longest stage of this Tour with 387 km, Stöpel lost the lead to André Leducq. Leducq kept the lead for the rest of the race, winning six stages along the way. In the fifth stage, Spanish Vicente Trueba escaped and reached the top of the Col d'Aubisque first. On the way down, Benoît Fauré overtook him, and reached the Tourmalet first. But he didn't win the stage, as Italian Antonio Pesenti caught him. Behind the leaders in the stage, Leducq was fighting for the leading position in the general classification. He was not a good climber, but was one of the best descenders.[7]

On one stage, Leducq flatted, and received a wheel from his team mate Georges Speicher, who would win the next Tour.[6] 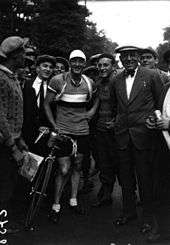 André Leducq, winner of the 1934 Tour de France (pictured at the Tour)

In the tenth stage, Leducq almost lost the lead. Camusso had escaped, and Stöpel had followed him. Leducq lost more than five minutes in the stage, and even more due to the bonification time.[7] After that stage, Stöpel was within three minutes of Leducq, and Camusso within six minutes.[7] In the eleventh stage, Leducq could have lost the race. Benoît Fauré, a French cyclist riding as a touriste-routier, escaped, and was followed by Francesco Camusso. At one point, they were so far ahead that Camusso was the virtual leader, but eventually they were caught back.[6]

Leducq also crossed the finishline first in the eighteenth stage, but the jury relegated him because he had been pushed by Albert Barthélemy.[6]

Leducq and Stöpel finished in the same group for most of the stages. Only in four stages was there a time difference:[1][8]

The cyclist to reach the finish in the least time was the winner of the stage. The time that each cyclist required to finish the stage was recorded. For the general classification, these times were added together. If a cyclist had received a time bonus, it was subtracted from this total; all time penalties were added to this total. The cyclist with the least accumulated time was the race leader, identified by the yellow jersey.

The team classification was calculated by adding up the times in the general classification of the three highest ranking cyclists per team; the team with the least time was the winner.

Kurt Stöpel was the first German to reach the podium of the Tour de France.[3] He would be the only German on the podium until Jan Ullrich became 2nd in 1996.

The organing newspaper, l'Auto named a meilleur grimpeur (best climber), an unofficial precursor to the modern King of the Mountains competition. This award was won by Vicente Trueba.[13]

Winner André Leducq kept riding the Tour de France until 1938, but he never managed to win again,[6] although he had three more stage victories.[14]