Yasuhito Endō (遠藤 保仁, Endō Yasuhito, born 28 January 1980 in Kagoshima City in Kagoshima Prefecture) is a Japanese footballer, who currently plays for the J. League team Gamba Osaka.[4] His older brother Akihiro, who retired in 2008, is also a former professional footballer, and was selected as one of Japan under-23 national football team members played at 1996 Olympics. He is considered a cult hero at Gamba Osaka and the Japan National Football Team. It is because he has formidable passing ability, leadership, and goal scoring ability. He is also known for his excellent accuracy on free kicks and is revered as one of Japan's most creative midfielders as well as one of the most talented Japanese footballers of his generation, despite playing domestically in his home country.

In 2011, he became the first J. League player to be named in the J. League Best Eleven 9 times. In 2009, he was named "Player of the Year" by the Asian Football Confederation.[5]

In 2012, he extended his record and became the first Japanese player to be selected in the J. League Best Eleven ten consecutive times in a row in the midfield position.[6]

On 24 June 2010, Endō scored from a free-kick against Denmark in a 3–1 win as Japan qualified for the second round of the World Cup.[8]

On 12 October 2010, he became the fourth player to earn 100th full international cap for Japan in a friendly match against South Korea. On 16 October 2012, Endo became Japan's most capped player in a friendly against Brazil.[9] His start in this match was his 123rd appearance for the national team, surpassing Masami Ihara's previous record of 122 caps.[9] 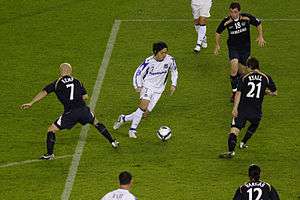 Endō was included in Japan's squad for the 2015 AFC Asian Cup and scored the team's opening goal of the tournament in a 4–0 defeat of Palestine.[10] In the team's next match, he won his 150th cap as Japan defeated Iraq 1–0.[11] 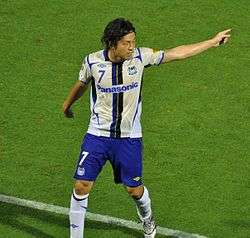 Endō playing for Gamba Osaka in 2011