The Rajputana Agency was a political office of the British Indian Empire dealing with a collection of native states in India (now in Rajasthan, west of Jaipur, northwestern India), under the political charge of an Agent reporting directly to the Governor-General of India and residing at Mount Abu in the Aravalli Range. The total area of the states falling within the Rajputana Agency was 127,541 square miles (330,330 km2), with eighteen states and two estates or chiefships.

For administrative purposes Rajputana was subdivided into nine groups of states, consisting of three residencies and six agencies, dealing with the following (e)states :

The small British province of Ajmer-Merwara was also included within the geographical area of Rajputana, but that was under direct British rule.

All of the princely states had Hindu rulers, except Tonk, which had a Muslim ruler, most being Rajputs, except two in Eastern Rajputana, Bharatpur State and Dholpur State, which had Jat rulers.

Although Rajputs ruled most of the states, they comprised a small minority of the population; in the 1901 census, of a total population of 9,723,301, only 620,229 were Rajputs, who were numerically strongest in the northern states and in Udaipur & Tarangagadh.

Other important castes and tribes of Rajputana were the Brahmins, who traditionally occupied the highest rank among castes, and were numerous and influential; the Bhats, who were the keepers of secular tradition and of the genealogies; the Hindu mercantile castes; Jains, who comprised the majority of the merchants; the powerful agricultural groups, such as the Jats and the Gurjars, the tribal peoples, Bhils, Meenas and Meo. In the 1901 census, 7,035,093 persons, or more than 72% of the total population spoke one of the Rajasthani languages.

Prior to the Muslim invasions of northern India in the eleventh century, Rajputana was ruled by a number of local dynasties, Chief of these were the Pratiharas, who ruled at Kanauj; the Paramaras of Malwa; the Chauhans of Ajmer; the Solankis of Anhilwara in Gujarat; the Guhilots with the Sisodia of Udaipur (Mewar); the Rathores of Marwar (Jodhpur); and the Kachwaha clan of Jaipur. The Rathore, Chauhan, Sisodia and Kachwahas ruled until Indian independence. These Rajput dynasties were gradually supplanted or subordinated by the Muslim invaders of the 11th century and weakened by internal feuds. At the beginning of the 16th century the Rajput power began to revive, only to be overthrown by the Babur, founder of the Mughal empire at Fatehpur Sikri in 1527. The clans were finally either conquered, overawed or conciliated by Akbar, except for the distant Sisodia clan, which, however, submitted to Jahangir in 1616. From Akbar's accession to Aurangzeb's death in 1707, a period of 151 years, most of North India was under Mughal control.

Aurangzeb's death and the invasion of the Marathas and Nader Shah of Iran led to a triple alliance among the three leading Rajput chiefs, which internal jealousy so weakened that the Marathas, having been called in by the Rathors to aid them, took possession of Ajmer about 1756. By the end of the century nearly the whole of Rajputana had been virtually subdued by the Marathas. The Second Anglo-Maratha War distracted the Marathas from 1807 to 1809, but afterwards Maratha domination of Rajputana resumed. In 1817 the British went to war with the Pindaris, raiders who were based in Maratha territory, which quickly became the Third Anglo-Maratha War, and the British government offered its protection to the Rajput rulers from the Pindaris and the Marathas. The Pindari were defeated, and the Afghan adventurer Amir Khan submitted and signed a treaty with the British, making him the ruler of Tonk. By the end of 1818 similar treaties had been executed between the other Rajput states and Britain. The Maratha Sindhia ruler of Gwalior gave up the district of Ajmer-Merwara to the British, and Maratha influence in Rajasthan came to an end. Most of the Rajput princes remained loyal to Britain in the Revolt of 1857, and few political changes were made in Rajputana until Indian independence in 1947. 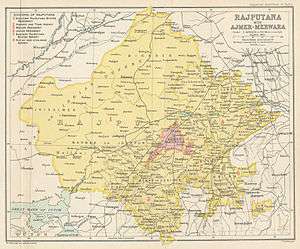 In the time of the British Raj, the majority of the people were occupied in agriculture. In the large towns banking and commerce flourished. In the north, the staple products for export were salt, grain, wool and cotton, and in the south opium and cotton. The major imports included sugar, hardware and piece goods. Rajputana had relatively little industrial production. The principal manufactures were cotton and woolen goods, metalwork, ivory carving, and other handicrafts which were chiefly carried on in the eastern states. The system of agriculture was very simple; in the drier country west of the Aravalli Range only one crop was raised in the year, while in other parts south and east of the Aravallis two crops were raised annually, and various kinds of cereals, pulses and fibres are grown. In the desert tracts fine breeds of camels, cattle, horses and sheep were to be found wherever there is pasturage. Irrigation, mostly from wells, was almost confined to the northern portion. Rajputana was traversed throughout by the Rajputana railway, with its Malwa branch in the south, and diverging to Agra and Delhi in the north. Jodhpur, Udaipur and Bikaner had constructed branch railways at their own cost, the first of which was extended in 1901 to Hyderabad in Sindh. In 1909 another line was opened running north near the eastern boundary from Kotah to Bharatpur.