The 2016 United States presidential election in Nevada was held on November 8, 2016, as part of the 2016 General Election in which all 50 states plus The District of Columbia participate. Nevada voters will choose electors to represent them in the Electoral College via a popular vote.

Hillary Clinton won the state over nationwide winner Donald Trump, retaining a Democratic hold from since 2008.

This is the second time since 1908, and first time since 1976, that Nevada voted for a candidate who did not win the general election, despite its quickly rising amount of electoral votes and its caucus turnouts. 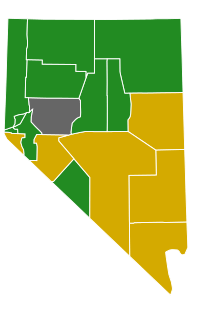 The 2016 Nevada Democratic caucuses took place on February 20 in the U.S. state of Nevada, traditionally marking the Democratic Party's third nominating contest in their series of presidential primaries ahead of the 2016 presidential election.

With all other candidates having dropped out of the race ahead of the Nevada caucuses, the two remaining candidates were Bernie Sanders and Hillary Clinton.[1]

Of the total number of 43 delegates the Nevada Democratic Party may send to the 2016 Democratic National Convention, 35 are pledged and 8 are unpledged.

The delegate selection process is a system with three levels:

A majority of participants at the February caucuses supported Hillary Clinton. However, the county conventions on April 2, 2016 resulted in more Sanders delegates than Clinton delegates being sent to the state convention in May.

On October 13, 2015, the Democratic Party's very first debate was held at the Wynn Hotel in Las Vegas. Hosted by Anderson Cooper, it aired on CNN and was broadcast on radio by Westwood One. Participants were the candidates Hillary Clinton, Bernie Sanders, Jim Webb, Martin O'Malley, and Lincoln Chafee. It was the first and only debate appearance of Chafee and Webb, who ended their campaigns on October 23 and October 20, respectively.

On February 18, MSNBC and Telemundo hosted a forum in Las Vegas.

The County Conventions were marked by bickering between Clinton and Sanders supporters, most notably in Clark County,[2] which had been won by Clinton during the caucuses and led to the attempted arrest of the head of the credentials committee, Sanders supporter Christine Kramar,after the Clinton supporters on the Clark Country Democratic committee attempted to depose her from her position. Kramar had discovered that the Clark County Democratic Party had been having private correspondence with only Clinton's campaign, as opposed to both campaigns.

The state convention was held in May as the final stage of the delegate selection process. Supports of Senator Sanders were angered when Party officials declined to accept the credentials of close to 60 pro-Sanders delegates. Nevada Democratic Party Chairwoman, Roberta Lange allegedly received numerous death threats and threats to the lives of her family and grandchildren, a criminal investigation has yet to confirm these claims or the identities of those allegedly involved. At the convention, Sanders supporters protested until the staff cancelled the event.[4][5] The event was later criticized as being violent, although there is no evidence that violence occurred.[6]

Despite charges by Sanders supporters that the Convention was rigged against their candidate, according to Jon Ralston,[5] "the facts reveal that the Sanders folks disregarded rules, then when shown the truth, attacked organizers and party officials as tools of a conspiracy to defraud the senator of what was never rightfully his in the first place."[5][7] After Sanders campaign Chair Jeff Weaver repeated assertions of process-rigging by Democratic Party officials, Politifact examined the evidence and concluded that, while the Party's selection process was "arcane" and "incredibly confusing", the fact is that "Clinton’s supporters simply turned out (attended the Convention) in larger numbers and helped her solidify her delegate lead." Moreover, according to Politifact: "There’s no clear evidence the state party 'hijacked' the process or ignored 'regular procedure.'"[8]

The Nevada Democratic Party wrote to the Democratic National Committee accusing Sanders supporters of having a "penchant for extra-parliamentary behavior — indeed, actual violence — in place of democratic conduct in a convention setting."[9] Sanders responded by denouncing the alleged use of violence while asserting that they were not treated with "fairness and respect" in a statement.[9]

In a TV segment, comedian Samantha Bee reported on the fracas,[10][11] as did Last Week Tonight with John Oliver[12] and Late Night with Seth Meyers in "A Closer Look" segment.[13] 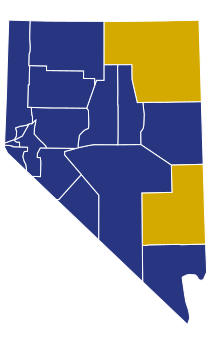 The following are final 2016 predictions from various organizations for Nevada as of Election Day.