The Tai Dam language is similar to Thai and Lao, but it is not close enough to be readily understood by most Thai and Lao speakers. In particular, the Pali and Sanskrit additions to Thai and Lao are largely missing from Tai Dam.[3]

Tai Dam is spoken in Vietnam, China, Laos, and Thailand. In central Thailand, it is known as Thai Song.

The Tai Dam language has its own system of writing, called Tai Viet, which consists of 31 consonants and 14 vowels. Although the language is tonal, there are no tone markers, as there are in Tai and Lao. According to Thai authors, the writing system is probably derived from the old Thai writing of the kingdom of Sukhotai.[3] 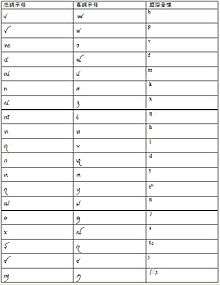 Proposals to encode Tai Viet script in Unicode go back to 2006.[5] A Unicode subcommittee reviewed a February 6, 2007 proposal submitted by James Brase of SIL International for what was then called Tay Viet script.[6] At the ISO/IEC JTC1/SC2/WG2 meeting on April 24, 2007, a revised proposal[7] for the script, now known as Tai Viet, was accepted "as is", with support[8] from TCVN, the Vietnam Quality & Standards Centre.

Tai Viet script was added to the Unicode Standard in October, 2009 with the release of version 5.2.

The Unicode block for Tai Viet is U+AA80–U+AADF: