In four-dimensional geometry, a runcinated 5-cell is a convex uniform 4-polytope, being a runcination (a 3rd order truncation) of the regular 5-cell.

There are 3 unique degrees of runcinations of the 5-cell, including with permutations, truncations, and cantellations.

E. L. Elte identified it in 1912 as a semiregular polytope. 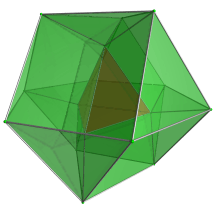 The Cartesian coordinates of the vertices of an origin-centered runcinated 5-cell with edge length 2 are:

An alternate simpler set of coordinates can be made in 5-space, as 20 permutations of:

This construction exists as one of 32 orthant facets of the runcinated 5-orthoplex.

A second construction in 5-space, from the center of a rectified 5-orthoplex is given by coordinate permutations of:

Its 20 vertices represent the root vectors of the simple Lie group A4. It is also the vertex figure for the 5-cell honeycomb in 4-space.

The tetrahedron-first orthographic projection of the runcinated 5-cell into 3-dimensional space has a cuboctahedral envelope. The structure of this projection is as follows:

The regular skew polyhedron, {4,6|3}, exists in 4-space with 6 squares around each vertex, in a zig-zagging nonplanar vertex figure. These square faces can be seen on the runcinated 5-cell, using all 60 edges and 20 vertices. The 40 triangular faces of the runcinated 5-cell can be seen as removed. The dual regular skew polyhedron, {6,4|3}, is similarly related to the hexagonal faces of the bitruncated 5-cell. 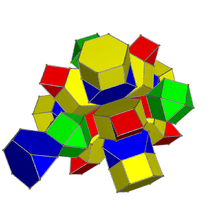 The runcitruncated 5-cell or prismatorhombated pentachoron is composed of 60 vertices, 150 edges, 120 faces, and 30 cells. The cells are: 5 truncated tetrahedra, 10 hexagonal prisms, 10 triangular prisms, and 5 cuboctahedra. Each vertex is surrounded by five cells: one truncated tetrahedron, two hexagonal prisms, one triangular prism, and one cuboctahedron; the vertex figure is a rectangular pyramid.

The Cartesian coordinates of an origin-centered runcitruncated 5-cell having edge length 2 are:

The vertices can be more simply constructed on a hyperplane in 5-space, as the permutations of:

This construction is from the positive orthant facet of the runcitruncated 5-orthoplex.

Coxeter calls this Hinton's polytope after C. H. Hinton, who described it in his book The Fourth Dimension in 1906. It forms a uniform honeycomb which Coxeter calls Hinton's honeycomb.[1] 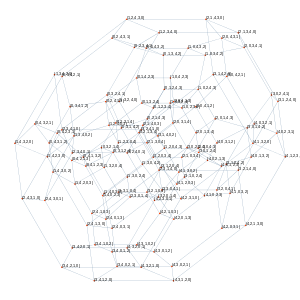 Orthogonal projection as a permutohedron

The omnitruncated 5-cell honeycomb can tessellate 4-dimensional space by translational copies of this cell, each with 3 hypercells around each face. This honeycomb's Coxeter diagram is

.[3] Unlike the analogous honeycomb in three dimensions, the bitruncated cubic honeycomb which has three different Coxeter group Wythoff constructions, this honeycomb has only one such construction.[1]

The Cartesian coordinates of the vertices of an origin-centered omnitruncated 5-cell having edge length 2 are:

vertex figure for the omnisnub 5-cell

The full snub 5-cell or omnisnub 5-cell, defined as an alternation of the omnitruncated 5-cell, can not be made uniform, but it can be given Coxeter diagram

These polytopes are a part of a family of 9 Uniform 4-polytope constructed from the [3,3,3] Coxeter group.