This article is about the district. For its eponymous headquarters, see Theni.

Theni District is a district of Tamil Nadu state in South India. The city of Theni is the district headquarters. The district is divided into two natural divisions: The hilly areas are constituted by parts of the three taluks Periyakulam, Uthamapalayam and Andipatti with thick vegetation and perennial streams from the hills on the western side and Cumbum valley which lies in Uthamapalayam taluk.[3] As of 2011, Theni district had a population of 1,245,899 with a sex-ratio of 991 females for every 1,000 males.

Theni District was formed by the bifurcation from erstwhile Madurai District as per G.O. Ms. No. 679 Revenue Department Dated July 7, 1996. Consequent to the bifurcation, one new Revenue Division with headquarters at Uthamapalayam and two new Taluks at Theni and Bodinayakanur were also created with effect from January 1, 1997. Theni Municipal town was only a firka headquarters until December 31, 1996. Consequent to the formation of the new District, Theni Municipal Town was upgraded as the Taluk and District headquarters on January 1, 1997.[4]

The region covered by present-day Theni District was sparsely populated before the 1900s. In 1886 Mullaperiyar dam project bought some part of the water from Periyar River downhill to the Cumbum Valley and merged it into the Mullayar River. This project helped more people to settle down in Cumbum Valley. Also to be noted that Theni was itself was a small though lesser-known town by the 1900s. After the Mullay-Periyaar merger project lots of people from nearby dry arid regions (Sivakasi, Kovilpatti, Virudhunagar, Sattur and several nearby towns) settled in Cumbum-Valley (present day Theni District). So there was influx of people by the 1890s to 1920s. Bodi and Periyakulam were famous places at that time. Later Theni developed rapidly due to lots of business activities.

The 2,889 km2 (1,115 sq mi) district lies at the foot of the Western Ghats between 9' 39' and 10' 30' North latitude and between 77' 00' and 78' 30' of East Longitude. Central location: 10°04′N 77°45′E﻿ / ﻿10.067°N 77.750°E﻿ / 10.067; 77.750. The district is bounded by Dindigul District to the north, Madurai District to the east, Virudhunagar District to the southwest, and Idukki district of the Kerala State to the west. The district is home to Theni, Periyakulam, Bodinayakanur, Cumbum, Uthamapalayam, Kombai, Gudalur, Chinnamanur, Andipatti, Thevaram,Pottipuram,Ramakrishnapuram, Telugu dominant Lakshmipuram Ambasamudram,Govindanagaram,Srirengapuram,Venkadachalapuram and several other small villages likePathirakalipuram, SukkangalPatti, sadaiyalpatti, Meenatchipuram, Melasindalaichery, Pallavarayan Patti a popular village in Tamil Nadu Jallikattu. Kamatchipuram It is diversified by several ranges and hills. A range of hills which runs parallel to Western Ghats from north to south separate it from the neighboring state of Kerala.[5] 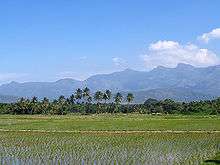 Paddy fields across the backdrop of the Western Ghats

Its economy is mostly agricultural. Utilisation of land area for cultivation in Theni district is 40.33%.[3][6] The principal crop production (in tonnes) in 2005-2006 was: sugarcane 1,201,221, cotton 95,360 (561 bales of 170. kg lint each), rice (paddy) 66,093, millets and other cereals 57,081, pulses 6,677, groundnut 4,021 and gingelly 325.[7] Silk, Banana, Coconut, Tea, Coffee, Cardamom, Grapes and Mangoes are other main produce of the district.[8] even though this place is economically good. Cumbum Valley is a major centre for grape production with 4,000 small farmers producing over 90,000 tonnes of Muscat grapes, locally known as panneer dhrakshai, and about 10,000 tonnes of Thomson seedless grapes. The unique feature here is that the grapes are harvested throughout the year, while in most grape growing centres elsewhere the season ends with summer.

Cotton Spinning Mills and Sugar Mills are the major industries in this district. In Andipatti Taluk Handloom weaving and power looms are flourishing. In Uthamapalayam Taluk, the Highwavis Estate produces an important amount of Tea. Bodinayakanur is a major market place for cardamom, coffee, tea and black pepper. This city is also called "Cardamom City" because of the large quantity of cardamom trade in this area. It has an auction centre for cardamom.[5]

The Periyar and Surliar Hydro Power Stations and the Vaigai Micro Hydro Power Station have 181 MW installed capacity and actual power generation of 494 MW in 1996 in this district.[3][9] Theni is one of the active business hubs in the western side of Tamil Nadu, inviting more industries to its locality. The district currently has 41.09 km of Metre gauge track serving 3 Railway Stations which connect to Madurai.[3][6] 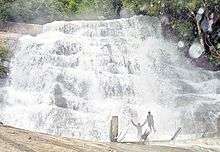 There has been no conservation of biological resources in the district. The information of wild life census in Theni district is yet to be made available.[3]