Irreligion in the United States

Encompassing at least agnosticism, atheism, deism,[lower-alpha 5] secular humanism, and general secularism,[4] Americans without a religious affiliation represent about 20% or more of the population.[1][2][5] and since the early 1990s, independent polls have shown their rapid growth.[6][7]

A comprehensive study by David Campbell and Harvard University professor Robert Putnam found that religious Americans are three to four times more likely than their nonreligious counterparts to "work on community projects, belong to voluntary associations, attend public meetings, vote in local elections, attend protest demonstrations and political rallies, and donate time and money to causes -- including secular ones." However, religious Americans who regularly attend religious services but have no friends there do not have higher levels of civic participation, while nonreligious Americans who have religious friends do get more involved. "It's not faith" that accounts for civic activism, Putnam said, "It's faith communities." The authors said the same effect might be found in secular organizations that are close-knit with shared morals and values.[14][15] The study also found that religious Americans are less tolerant than secular Americans of free speech, dissent, and several other measures of tolerance.[15]

Alan Cooperman of Pew Research Center notes that nonreligious Americans commonly grew up in a religious tradition and consciously lost it "after a great deal of reflection and study".[17] As a result, atheists and agnostics are more knowledgeable about religion than those who identify with most major religions, according to a 2010 Pew survey.[18][19]

The American public at large has a positive view of nonreligious people but a negative view of atheists. One "extensive study of how Americans view various minority groups", found that "atheists are at the top of the list of groups that Americans find problematic."[20] A Religion and Public Life Survey (2002) found that 54 percent of Americans have an unfavorable opinion of atheists,[21] but the favorability of people who are "not religious" is 52.2%, with a net difference of 23.8%.[22]

The 2008 American Religious Identification Survey (ARIS) found a difference between how people identify and what people believe. While only 0.7% of U.S. adults identified as atheist, 2.3% said there is no such thing as a god. Only 0.9% identified as agnostic, but 10.0% said there is either no way to know if a god exists or they weren't sure. Another 12.1% said there is a higher power but no personal god. In total, only 15.0% identified as Nones or No Religion, but 24.4% did not believe in the traditional concept of a personal god. The conductors of the study concluded, "The historic reluctance of Americans to self-identify in this manner or use these terms seems to have diminished. Nevertheless ... the level of under-reporting of these theological labels is still significant ... many millions do not subscribe fully to the theology of the groups with which they identify."[6]

Similarly, the 2012 Pew study reported that 23% of Americans who affiliated with a religion were not religious. The religiously affiliated were 79% of the population, and the unaffiliated were 19.6%, including 6% "atheist" or "agnostic".[1][23]

A 2007 Barna group poll found that about 20 million people say they are atheist, have no religious faith, or are agnostic, with 5 million of that number claiming to be atheists. The study also found that "[t]hey tend to be more educated, more affluent and more likely to be male and unmarried than those with active faith" and that "only 6 percent of people over 60 have no faith in God, and one in four adults ages 18 to 22 describe themselves as having no faith."[24]

A 2008 Gallup survey reported that religion is not an important part of daily life for 34% of Americans.[5] In May of that year, a Gallup poll asking the question "Which of the following statements comes closest to your belief about God: you believe in God, you don't believe in God but you do believe in a universal spirit or higher power, or you don't believe in either?" showed that, nationally, 78% believed in God, 15% in "a universal spirit or higher power", 6% answering "neither", and 1% unsure. The poll also highlighted the regional differences, with residents in the Western states answering 59%, 29%, and 10% respectively, compared to the residents in the Southern states that answered 86%, 10%, and 3%.[25] Several of the western states have been informally nicknamed Unchurched Belt, contrasting with the Bible Belt in the southern states.

The Pew Religious Landscape survey reported that as of 2014, 22.8% of the American population is religiously unaffiliated, atheists made up 3.1% and agnostics made up 4% of the US population.[2]

The General Sociological Survey reported that as of 2014, 21% of the American population does not identify with a religion, including 3% identifying as atheists and 5% identifying as agnostics (5%).[12]

Several groups promoting secularist beliefs or opposing religious faith altogether – including the Freedom From Religion Foundation, American Atheists, Camp Quest, and the Rational Response Squad – have witnessed large increases in membership numbers in recent years, and the number of secularist student organizations at American colleges and universities increased during the 2000s (decade).[24][30] However, the growth of atheist groups is very limited and will possibly shrink due to atheists normally being non-joiners and some atheist organizations being too "religious" like.[13] Phil Zuckerman notes that the overwhelming majority of the nonreligious in the US are not identifying with secular movements or secularism or secular beliefs and instead live basic mundane lives without much thought of the secular.[13] As such, the overwhelming majority on the nonreligious do not join secular groups. Only a very small minority of the nonreligious, around 1% to 2%, actually join these kinds of groups.[13]

When looking at countries which have high levels of atheism such as Scandinavian nations, atheist organizations there generally have very low membership and only those that have links to a political party or offer legalized rituals have some noticeable membership.[31] 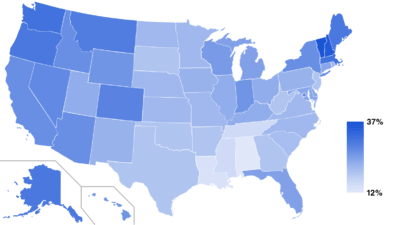 Various beliefs and practices of the Nones in 2012.

Territories of the United States with percentage of population claiming no religion in 2008.

Regions of the United States ranked by percentage of population claiming no religion in 2014.

Demographics of the religiously unaffiliated in 2012 (as fraction of the named groups).

According to exit polls in the 2008 presidential election, 71% of non-religious whites voted for Democratic candidate Barack Obama while 74% of white Evangelical Christians voted for Republican candidate John McCain. This can be compared with the 43–55% share of white votes overall.[37] More than six-in-ten religiously unaffiliated registered voters are Democrats (39%) or lean toward the Democratic Party (24%). They are about twice as likely to describe themselves as political liberals than as conservatives, and solid majorities support legal abortion (72%) and same-sex marriage (73%). In the last five years, the unaffiliated have risen from 17% to 24% of all registered voters who are Democrats or lean Democratic.[7] According to a Pew Research exit poll 70% of those who were religiously unaffiliated voted for Barack Obama.

In January 2007, California Congressman Pete Stark became the first openly atheist member of Congress. He described himself as "a Unitarian who does not believe in a Supreme Being." In January 2013, Kyrsten Sinema became the first openly non-theist Congresswoman, representing the State of Arizona. Although she "believes the terms 'nontheist', 'atheist' or 'nonbeliever' are not befitting of her life's work or personal character," she does believe in a secular approach to government. Her unbelief "was not used to slander her as un-American or suggest that she was unfit for office."[38]

On January 20, 2009, Barack Obama became the first U.S. President to acknowledge "non-believers" in his inaugural address,[39] although other presidents such as George W. Bush[40] have previously acknowledged non-believers in different speeches.