Demography of the United States

As of November 30, 2016, the United States has a total resident population of 325,110,000, making it the third most populous country in the world.[1] It is very urbanized, with 81% residing in cities and suburbs as of 2014 (the worldwide urban rate is 54%).[2] California and Texas are the most populous states,[3] as the mean center of U.S. population has consistently shifted westward and southward.[4] New York City is the most populous city in the United States.[5]

The total fertility rate in the United States estimated for 2015 is 1.84 children per woman,[6][7] which is below the replacement fertility rate of approximately 2.1. Compared to other Western countries, in 2012, U.S. fertility rate was lower than that of France (2.01),[8] Australia (1.93) and the United Kingdom (1.92).[9] However, U.S. population growth is among the highest in industrialized countries,[10] because the differences in fertility rates are less than the differences in immigration levels, which are higher in the U.S.[11][12] The United States Census Bureau shows a population increase of 0.75% for the twelve-month period ending in July 2012. Though high by industrialized country standards, this is below the world average annual rate of 1.1%.[10]

The United States Census Bureau defines White people as those "having origins in any of the original peoples of Europe, the Middle East, or North Africa. It includes people who reported "White" or wrote in entries such as Irish, German, Italian, Lebanese, Near Easterner, Arab, or Polish."[14] Whites constitute the majority of the U.S. population, with a total of about 245,532,000 or 77.7% of the population as of 2013. 62.6% of the population of the country are non-Hispanic whites. Despite major changes due to immigration since the 1960s, and the higher birth-rates of nonwhites, the overall current majority of American citizens are still white, and English-speaking, though regional differences exist.

Hispanic and Latino Americans accounted for 48% of the national population growth of 2.9 million between July 1, 2005, and July 1, 2006.[18] Immigrants and their U.S.-born descendants are expected to provide most of the U.S. population gains in the decades ahead.[19] 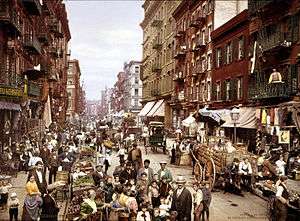 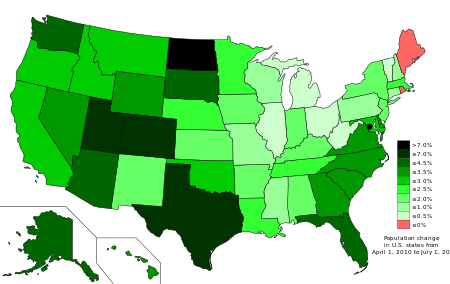 (Note that ~95% of Hispanics are included as "white Hispanics" by CDC, which does not recognize the Census' "Some other race" category and counts people in that category as white.)

Source: National Vital statistics report based on 2010 US Census data[22]

Note: Hispanics are counted both by their ethnicity and by their race, giving a higher overall number.[7][41] Also note that growth arrows indicate an increase or decrease in the number of births, not in the fertility rate.

NOTE: that growth arrows indicate an increase or decrease in the number of births, not in the fertility rate.

The most densely populated state is New Jersey (1,121/mi2 or 433/km2). See List of U.S. states by population density for maps and complete statistics.

The United States Census Bureau publishes a popular "dot" or "nighttime" map showing population distribution at resolutions of 1,000 and 7,500 people,[45] as well as complete listings of population density by place name.[46]

As of 2011, about 250 million Americans live in or around urban areas. That means more than three-quarters of the U.S. population shares just about three percent of the U.S. land area.[49]

The following table shows the populations of the 18 of top twenty metropolitan areas, at the time of the 2010 Census. Note Denver and Baltimore have over 2.5 million residents in their metro areas. 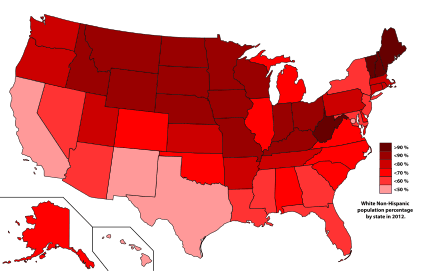 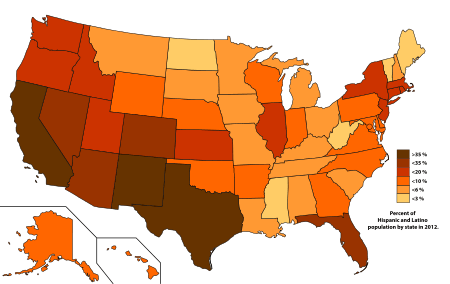 Percent of Hispanic and Latino population by state in 2012. 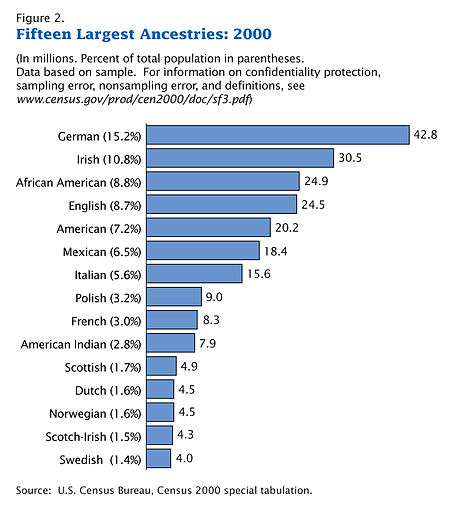 The U.S. population's distribution by race and ethnicity in 2010 was as follows; due to rounding, percentage figures may not add up to the totals shown.[52] 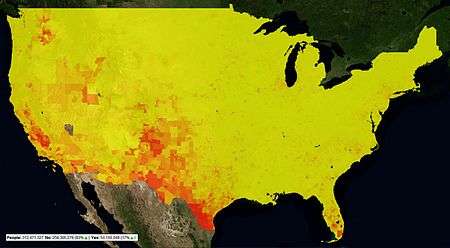 Further information: Race and ethnicity in the United States

In 2010, the Washington Post estimated that there were 11 million undocumented immigrants in the country.[58]

A 2011 report by the Institute estimated that 4 million adults identify as gay or lesbian, representing 1.7% of the population over 18. A spokesperson said that, until recently, few studies have tried to eliminate people who had occasionally undertaken homosexual behavior or entertained homosexual thoughts, from people who identified as lesbian or gay.[62] (Older estimates have varied depending on methodology and timing; see Demographics of sexual orientation for a list of studies.) The American Community Survey from the 2000 U.S. Census estimated 776,943 same-sex couple households in the country as a whole, representing about 0.5% of the population.[61]

In 2008, the U.S. Census Bureau projected the future censuses as follows:[20]

The table below is based mainly on selected data as reported to the United States Census Bureau. It only includes the voluntary self-reported membership of religious bodies with 750,000 or more. The definition of a member is determined by each religious body.[71] In 2004, the US census bureau reported that about 13% of the population did not identify themselves as a member of any religion.[72]

In a Pew Research Survey performed in 2012, Americans without a religion (atheists, agnostics, nothing in particular, etc.) surpassed Evangelical Protestant Americans with almost 20% of Americans being nonreligious. If this current growth rate continues, by 2050, around 51% of Americans will not have a religion.[73]

A survey conducted in 2014 by the same organization indicated that the percentage of Americans unaffiliated with a religion rose to nearly 23% of the population, up from 16% in 2007.[74]

The United States government does not collect religious data in its census. The survey below, the American Religious Identification Survey (ARIS) 2008, was a random digit-dialed telephone survey of 54,461 American residential households in the contiguous United States. The 1990 sample size was 113,723; 2001 sample size was 50,281.

Adult respondents were asked the open-ended question, "What is your religion, if any?". Interviewers did not prompt or offer a suggested list of potential answers. The religion of the spouse or partner was also asked. If the initial answer was "Protestant" or "Christian" further questions were asked to probe which particular denomination. About one-third of the sample was asked more detailed demographic questions.

Religious Self-Identification of the U.S. Adult Population: 1990, 2001, 2008[81]Figures are not adjusted for refusals to reply; investigators suspect refusals are possibly more representative of "no religion" than any other group.

In 2006, the median household income in the United States was around $46,326. Household and personal income depends on variables such as race, number of income earners, educational attainment and marital status.

Social classes in the United States lack distinct boundaries and may overlap. Even their existence (when distinguished from economic strata) is controversial. The following table provides a summary of some prominent academic theories on the stratification of American society:

According to the Centers for Disease Control in 2011, an estimated 1.2 million people were living with HIV/AIDS in the United States.[91]

A study by William Strauss and Neil Howe, in their books Generations and Fourth Turning, looked at generational similarities and differences going back to the 15th century and concluded that over 80-year spans, generations proceed through four stages of about 20 years each.

A definitive recent study of US generational cohorts was done by Schuman and Scott (2012) in which a broad sample of adults of all ages was asked, "What world events are especially important to you?"[92] They found that 33 events were mentioned with great frequency. When the ages of the respondents were correlated with the expressed importance rankings, seven (some put 8 or 9) distinct cohorts became evident.

Today the following descriptors are frequently used for these cohorts (alive in 2000–10):

Birth rate has dropped since 1957.

Subdivided groups are present when peak boom years or inverted peak bust years are present, and may be represented by a normal or inverted bell-shaped curve (rather than a straight curve). The boom subdivided cohorts may be considered as "pre-peak" (including peak year) and "post-peak". The year 1957 was the baby boom peak with 4.3 million births and 122.7 fertility rate. Although post-peak births (such as trailing edge boomers) are in decline, and sometimes referred to as a "bust", there are still a relatively large number of births. The dearth-in-birth bust cohorts include those up to the valley birth year, and those including and beyond, leading up to the subsequent normal birth rate. The Baby boom began around 1943 to 1946.

From the decline in U.S. birth rates starting in 1958 and the introduction of the birth control pill in 1960, the Baby Boomer normal distribution curve is negatively skewed. The trend in birth rates from 1958 to 1961 show a tendency to end late in the decade at approximately 1969, thus returning to pre-WWII levels, with 12 years of rising and 12 years of declining birth rates. Pre-war birth rates were defined as anywhere between 1939 and 1941 by demographers such as the Taeuber's, Philip M. Hauser and William Fielding Ogburn.[109]

The following demographic statistics are from the CIA World Factbook, unless otherwise indicated.[110] 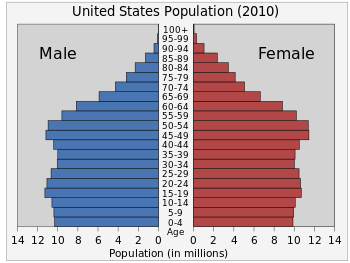 A population pyramid that shows the age of the population by sex in 2010. 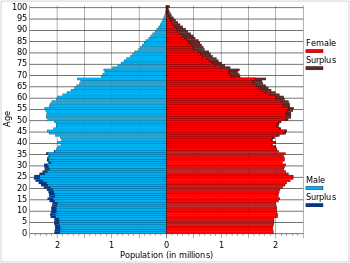 Further information: Children and adolescents in the United States

As of 2012, people are distributed by age as follows: 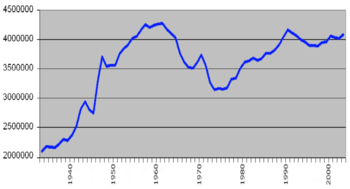 A study by the Agency for Healthcare Research and Quality (AHRQ) found that more than half (51 percent) of live hospital births in 2008 and 2011 were male.[116]

Per U.S. federal government data released in March 2011, births fell 4% from 2007 to 2009, the largest drop in the U.S. for any two-year period since the 1970s.[117] Births have declined for three consecutive years, and are now 7% below the peak in 2007.[118] This drop has continued through 2010, according to data released by the U.S. National Center for Health Statistics in June 2011.[119] Numerous experts have suggested that this decline is largely a reflection of unfavorable economic conditions.[120] This connection between birth rates and economic downturns partly stems from the fact that American birth rates have now fallen to levels that are comparable to the Great Depression of the 1930s.[121] Teen birth rates in the U.S. are at the lowest level in U.S. history.[122] In fact, teen birth rates in the U.S. have consistently decreased since 1991 through 2011, except for a brief increase between 2005 and 2007.[122] The other aberration from this otherwise steady decline in teen birth rates is the 6% decrease in birth rates for 15- to 19-year-olds between 2008 and 2009.[122] Despite these years of decrease, U.S. teen birth rates are still higher than in other developed nations.[122] Racial differences prevail with teen birth and pregnancy rates as well. The American Indian/Alaska Native, Hispanic, and non-Hispanic black teen pregnancy rates are more than double the non-Hispanic white teen birth rate.[123] 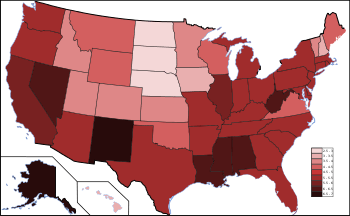 As of February 2014, the U6 unemployment rate is 14.9 percent.[136] The U6 unemployment rate counts not only people without work seeking full-time employment (the more familiar U-3 rate), but also counts "marginally attached workers and those working part-time for economic reasons." Note that some of these part-time workers counted as employed by U-3 could be working as little as an hour a week. And the "marginally attached workers" include those who have gotten discouraged and stopped looking, but still want to work. The age considered for this calculation is 16 years and over.[137]