LGBT demographics of the United States 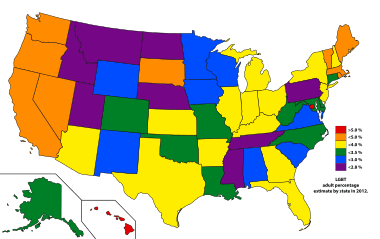 LGBT Adult Percentage by State in 2012.

The demographics of sexual orientation and gender identity in the United States have been more accurately studied in the social sciences in recent decades. In the first large-scale government survey measuring Americans’ sexual orientation, the NHIS reported in July 2014 that 1.6 percent of Americans identify as gay or lesbian, and 0.7 percent identify as bisexual.[1] In a Williams Institute review based on an June–September 2012 Gallup poll, approximately 3.4 percent of American adults identify themselves as being LGBT (lesbian, gay, bisexual, or transgender).[2] An earlier report published in April 2011 by the Williams Institute estimated that 3.8 percent of Americans identified as gay/lesbian, bisexual, or transgender: 1.7 percent as lesbian or gay, 1.8 percent as bisexual, and 0.3 percent as transgender.[3] The 2011 Williams Institute report also states that 8.2 percent of Americans reported that they had engaged in same-sex sexual behavior, and 11 percent reported some same-sex attraction. Studies from several nations, including the U.S., conducted at varying time periods, have produced a statistical range of 1.2[3] to 6.8[4] percent of the adult population identifying as LGBT. Online surveys tend to yield higher figures than other methods,[4] a likely result of the higher degree of anonymity of Internet surveys, which elicit reduced levels of socially desirable responding.[5]

The American cities with the highest gay populations are New York City with 272,493, Los Angeles with 154,270, Chicago with 114,449, and San Francisco with 94,234, as estimated by the Williams Institute in 2006.[13] However, one is much more likely to encounter gay residents in San Francisco, Seattle, Atlanta, Minneapolis, and Boston as a higher percentage of those cities' residents are gay or lesbian.

The U.S. metropolitan areas with the most gay residents are the New York, New York–Northern New Jersey–Long Island, New York metro with 568,903; followed by Los Angeles–Long Beach–Santa Ana, California with 442,211; and the Chicago-Naperville-Joliet, Illinois-Indiana-Wisconsin metro with 288,748.[14] 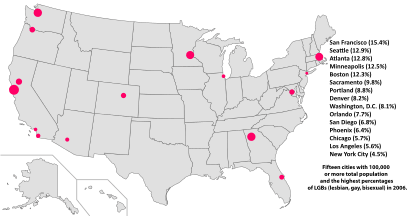 Cities with the highest percentage of LGBTs in 2006.

"Homosexuality/Heterosexuality: Concepts of Sexual Orientation" published findings of 13.95% of males and 4.25% of females having had either "extensive" or "more than incidental" homosexual experience.[18]

The American National Health Interview Survey conducts household interviews of the civilian non-institutionalized population. The results of three of these surveys, done in 1990–91 and based on over 9,000 responses each time, found between 2–3% of the people responding said yes to a set of statements which included "You are a man who has had sex with another man at some time since 1977, even one time."[20]

The Alan Guttmacher Institute of sexually active men aged 20–39 found that 2.3% had experienced same-sex sexual activity in the last ten years, and 1.1% reported exclusive homosexual contact during that time.[22]

Researchers Samuel and Cynthia Janus surveyed American adults aged 18 and over by distributing 4,550 questionnaires; 3,260 were returned and 2,765 were usable. The results of the cross-sectional nationwide survey stated men and women who reported frequent or ongoing homosexual experiences were 9% of men and 5% of women.[23]

Laumann et al. analyzed the National Health and Social Life Survey of 1992 which had surveyed 3,432 men and women in the United States between the ages of 18 and 59 and reported that the incidence rate of homosexual desire was 7.7% for men and 7.5% for women.[24]

During the 2000 US presidential election campaign, market research firm Harris Interactive studied the prevalence of a gay, lesbian, bisexual or transgender identity employing three distinct methods. In phone interviews, 2% of the population self-identified as LGBT. Using in-person surveys with a blind envelope, that grew to 4%, and using online polls 6%. The group concluded that the difference between methods was due to the greater level of anonymity and privacy to online surveys, which provides more comfort to respondents to share their experiences.[26]

Smith's 2003 analysis of National Opinion Research Center data[27] states that 4.9% of sexually active American males have had a male sexual partner since age 18, but that "since age 18 less than 1% are [exclusively] gay and 4+% bisexual". In the top twelve urban areas however, the rates are double the national average. Smith adds, "It is generally believed that including adolescent behavior would further increase these rates." The NORC data has been criticised because the original design sampling techniques were not followed, and depended upon direct self-report regarding masturbation and same sex behaviors. (For example, the original data in the early 1990s reported that approximately 40% of adult males had never masturbated—a finding inconsistent with some other studies.)

The American Community Survey from the U.S. Census estimated 776,943 same-sex couples in the country as a whole, representing about 0.5% of the population.[13]

Fried's 2008 analysis of General Social Survey data shows the percentage of United States males reporting homosexual activity for three time periods: 1988–92, 1993–98, and 2000–06. These results are broken out by political party self-identification, and indicate increasing percentages, particularly among Democrats (perhaps reflecting, in the authors' view, either a shift of political allegiance among gay Americans, or increasing likelihood of acknowledging a homosexual orientation).[29]

Cornell University, carrying out research into sexuality amongst a representative sample of more than 20,000 young Americans, published that 14.4% of young women were not strictly heterosexual in behavior, a group that included lesbian and bisexual women; 5.6% of young men self-identified as being gay or bisexual.[30]

The National Health and Nutrition Examination Surveys interviewed a nationally representative sample of 11,744 adults aged 20 to 59 between 2003 and 2010. One hundred and eighty (1.5%) self-reported a homosexual orientation and 273 (2.3%) a bisexual one.[32]

The National Survey of Sexual Health and Behavior surveyed nearly 6,000 people nationwide between the ages of 14 and 94 through an online methodology and found that 7 percent of women and 8 percent of men identify as gay, lesbian or bisexual.[33]

A Gallup report published in October 2012 by the Williams Institute reported that 3.4% of US adults identify as lesbian, gay, bisexual or transgender. Minorities were more likely to identify as non-heterosexual; 4.6% of blacks, 4.0% of Hispanics and 3.2% of whites. Younger people, aged 18–29, were three times more likely to identify as LGBT than seniors over the age of 65, the numbers being 6.4% and 1.9%, respectively.[3][35]

The National Election Pool found that, among voters on Election Day, 5% identify as gay, lesbian, or bisexual.[36][37]

The National Survey of Family Growth is a nationally representative, multi-year survey of teenagers and adults aged 15-44. The sexual orientation items are presented only to interviewees over age 18. Results are presented separately for women and men.

In a study, National Bureau of Economic Research reached the conclusion that the share of the population that is non-heterosexual has been significantly underestimated in surveys utilizing traditional questioning methods, even if anonymous. In this study, it was found that, in all three facets of sexual orientation (identity, attraction, and behavior), the percentage of individuals who recognized themselves as non-heterosexual was larger when the survey method in use was the item randomized response, known to reduce socially desirable responding, in lieu of questions with direct responses. Because the study was, however, based on online volunteer samples, researchers make no suggestion as to the real size of the LGBT population.[41][41][42][42]

A study has also found that, based on the GSS, the proportion of men and women who self-report ever having had a same-sex sexual partner has steadily increased since the early 1990s. In the 1989-1994 period, 4.53% of men and 3.61% of women self-reported homosexual sex ever, which grew to 8.18% of men and 8.74% of women in the 2010-2014 period. The augmentation is mainly due to those who self-report sex with both genders; among those who have only had sex with the same gender, no clear pattern of increase emerged throughout the periods analyzed.[44]

The Public Religion Research Institute survey of 2,314 Millennials found that 88% identified as heterosexual, 4% as bisexual, 2% as gay, and 1% as lesbian. In a separate question, 1% identified as transgender. In total, 7% of Millennials identified as LGBT. Three percent refused to identify their sexual orientation. The unaffiliated were more likely to identify as LGBT than the religious, as were Democratic-leaning Millennials compared to the Republican-leaning. No differences were found among the races.[45]

In a nationally representative telephone survey of 35,071 Americans, Pew Research found that 1,604, or 4.6%, of the sample identified as gay, lesbian or bisexual, and 32,439 (or 92.4%) as heterosexual, with the remainder refusing or being unable to provide an answer, or identifying as something else.[46]