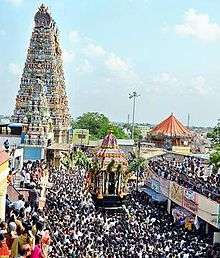 The town already existed before 1876. Kovilpatti was a water stop for steam engines after the introduction of the Southern Railways, and the establishment of textile mills like Loyal Textiles (1891) and Lakshmi Mills Ltd (1926) fueled the economic growth of the town. The Government Revenue divisional offices were sited there in 1911.

The climate of Kovilpatti town is hot and dry. Temperatures range between a maximum of 37 °C and a minimum of 22 °C. April to June are the hottest months and December and January are coldest with temperatures rising towards the end of February. Rainfall occurs mostly during the north-east monsoon in the months of October to December though the town receives little rainfall, averaging 840 mm compared to the district average. Annual rainfall has ranged from 964 mm to 228 mm during past decades.[5]

The Shenbagavalli-Poovananathar temple has a legend that Sage Agasthya came to South to balance the earth level when it sank at north during the wedding of Lord Shiva with Mother Parvathi is popular. On his way to Pothigai hills, the sage destroyed two demons Vilvalan and Vadhabi and also relieved himself of the Brahmmahati dosha that afflicted him due to killing of the demons. He also created the Agasthya spring as requested by the sages of Ponmalai hills. One Vamanan belonging to Shivakuzhu was born as the king of Vembakkottai in the name of Shenbagan as ordered by Nandhi, the bull vehicle of Lord Shiva. He built the temple as advised by the Lord. As the temple is built by king Shenbagan, Mother is named Shenbagavalli. Later, the temple was renovated by Ullamudayan belonging the 10th century.

Kathiresan temple is built on a hill Kathiresan hills at west side of the city. City view from the hill is quite interesting and may enjoy fresh air. Ettayapuram is situated about 15 km east of Kovilpatti. It is notable as a cotton growing centre. It is also famous as the birthplace of Nationalist poet and freedom fighter, Subramanya Bharathi. Points of interest are the ruins of Ettayapuram Jamin palace, the Manimandapam of Bharathiyar, the birth house of Bharathiyar, and the memorial of Sri Muthusamy Deikshidar. Kalugumalai is a massive dome of rock of 300 feet height situated on the road connecting Kovilpatti and Sankarankoil. It is famous for a rock cut temple called “Vettuvankoil”. Another rock cut temple is dedicated to lord Subramaniya Swamy is located at the foot of the rock. The remains of "Samana Palli" or Jain school can be seen atop the hill along the Vettuvan Koil. Panchalankuruchi is situated three kilometres north of Ottapidaram. The famous freedom fighter Kattabomman's fort was located here. At present only the fort remains; the rest of the settlement was destroyed by the British at the end of the war in 1799. In 1975, the government of Tamil Nadu constructed a fort in Panchalankurich in memory of the freedom fighter. Sankarankoil is situated west of Kovilpatti. It is the site of temple of Sankara Narayanar and Gomathiamman and attracts pilgrims and devotees from the surrounding districts. The Adithapasu festival attracts large crowds every year during July or August.[9]

Kovilpatti is well connected by Road(NH7) and Train. Kovilpatti Airport: St. Bobgalie's Airport an Small Unused Airport which is rarely used an Helipad. There is no news for AAI for any future plans for this airport. This Port might not be available after days or might be converted to a Airforce base for dump and exercises in Future.