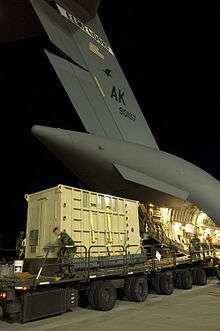 A 517th Airlift Squadron C-17 Globemaster III on the tarmac while the crate carrying Maggie, an 8,000-pound African elephant, is off-loaded for transport to the Performing Animal Welfare Society's ARK 2000 Wildlife Sanctuary.

The 517th Airlift Squadron (517 AS) is part of the 3d Wing at Joint Base Elmendorf-Richardson, Alaska. It operates C-12 Huron and C-17 Globemaster III aircraft providing airlfit in the Pacific theater.

Was transferred to Algiers, Algeria in November 1942, and attached, being later assigned to Twelfth Air Force as part of the North African Campaign. The squadron's aircraft flew supplies to front-line units in Algeria and Tunisia as soon as suitable landing strips were available and evacuated casualties back to rear area field hospitals. A flight of the squadron deployed to Tenth Air Force in India during the fall of 1942, to assist in the re-supply of Brigadier General Merrill and his men, affectionately known as "Merrill's Marauders". It was during this Ceylon, Burma, India campaign that the squadron received its first Distinguished Unit Citation, returning to Tunisia by the end of the year.

The squadron moved to Sicily, dropping airborne forces onto the island during Operation Husky, then moved to forward airfields in Italy during 1943 as part of the Italian Campaign. Just prior to "D" Day, part of the 16th left India for Italy to tow gliders into France on "D" Day. In July 1944, the detached unit was joined by the remainder of the 16th TCS at Ciampino, Italy and as the European Theater closed in on Germany, part of the 16th again went on detached service to Rosignano, Italy, operating re-supply missions to Greek Partisans during September to October 1944.

In the fall of 1944, moved to France in support of Operation Anvil, the Allied invasion of Southern France, and supported ground forces moving north through the Rhone Valley to link up with Allied forces moving east from Normandy. Returned to Northern Italy in early 1945, supporting the drive into the Po River Valley and the end of combat in Italy during May 1945. The squadron also hauled food, clothing, medicine, gasoline, ordnance equipment, and other supplies to the front lines and evacuated patients to rear zone hospitals.

In late May 1945, after V-E Day, the squadron was moved to Waller Field, Trinidad and attached to Air Transport Command. From Trinidad, the squadron ferried returning military personnel to Morrison Field, Florida, where they were sent on to other bases or prepared for separation after the war. Inactivated at the end of July 1945.

It was activated but unmanned from 1947-1948. When reactivated again in the 1960 it resupplied Distant Early Warning (DEW) line sites in Northern Canada and radar sites in Greenland. Parts of the squadron deployed to South Vietnam from 1967-1968 to provide tactical airlift. It provided intratheater airlift within Alaska including support to forward operating bases, airland/airdrop of troops, equipment and supplies, and search and rescue as required. It provided C-130 crews for Pacific airlift to Southwest Asia, August–November 1990. Since 1992 the 517th provided worldwide combat airdrop, tactical air/land, operational support airlift, airlift for theater deployed forces and resupply of remote Alaskan long-range radar sites in support of PACAF. It has provided continuous rotational airlift and airdrop support in Afghanistan and Iraq since 2004. The 517th, flying C-130H1s, was among first United States units to participate in relief efforts following the Asian tsunami that occurred on 26 December 2004.