The automotive industry in Bangladesh currently manufactures auto rickshaws and a locally designed three-wheeler motor vehicle, Mishuk, utilizing an engine from Honda. The country has a few large car plants which assemble the Mitsubishi Pajero Sport, Hino bus, and also the Tata bus and motorcycles.[1] 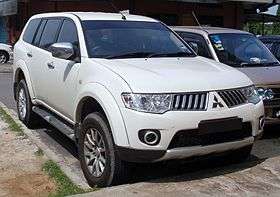 Pragoti is producing the Mitsubishi Pajero Sport in Bangladesh.

In 2009, the Malaysian Agate group proposed to build a car manufacturing plant in Bangladesh in cooperation with Walton, which itself is preparing to produce motorcycles.[2] In the same year, car manufacturing company TagAZ announced that they would build their third factory in Bangladesh, aiming for exporting. The plant is to be completed by 2012.[3] In February 2010, Japanese car manufacturer Mitsubishi officially proposed to the Bangladesh government to manufacture the Mitsubishi Pajero Sport in collaboration with Pragoti Industries, with a goal of production in 2011.[1]