The Bangladesh Navy (Bengali: বাংলাদেশ নৌবাহিনী; Bangladesh Nou Bahini) (NATO reporting name:BN) is the naval warfare branch of Bangladesh Armed Forces, responsible for Bangladesh's 118,813 square kilometres (45,874 sq mi) of maritime territorial area, and the defense of important harbors, military bases and economic zones.[3] The President of Bangladesh serves as the Commander-in-Chief of the Navy. The Chief of Naval Staff, usually a four-star officer in the rank of admiral, commands the navy.[4] The Bangladesh Navy came into the existence during Bangladesh Liberation War in 1971, and is headed by Admiral Mohammad Nizamuddin Ahmed.

The primary role of Bangladesh Navy is to protect country's economic and military interest at home and abroad. The Bangladesh navy is a front line disaster management force in Bangladesh and humanitarian missions abroad. It is a key regional player in counter terrorism efforts and engages in global peacekeeping with the United Nations.[8][9][10]

The Bangladesh Navy was created as part of Bangladesh Forces during Bangladesh's 1971 liberation war against Pakistan. Its official creation date is July 1971 during the Bangladesh Sector Commanders Conference 1971. In 1971, with West Pakistan imposing a brutal military crackdown in East Pakistan, the Bangladesh Liberation War was already underway. Many Bengali sailors and officers in the Pakistan Navy defected to form the nascent Bangladesh Navy. Initially, there were two ships PADMA and PALASH and 45 navy personnel. On 9 November 1971, the first naval fleet consisting of six small patrol vessels were inaugurated.[14] These ships tried to carry out raids on the Pakistani fleet, but were mistakenly hit and sunk by Indian Air Force on 10 December 1971. The next major attack was launched on Mongla seaport. According to official figures from Bangladesh Navy, a total of 334 sailors were involved with the newly created navy with 22 being killed in action.[15]

Independence to the end of the 20th century

Bangladesh Navy (BN) came into being during the liberation War of the country in 1971, in which it suffered a number of fatalities. The navy carried out around 45 operations during the war, including traditional naval operations as well as unconventional commando operations including guerrilla warfare. At the first leg of war, defected Bengali sailors joined the guerrilla forces. It was the eight sailors who defected Pakistan Navy sub-marine PNS Mangro, under construction in France, pioneered the formation of naval element of Liberation War. Later many other naval personnel participated. So far the information could be known, there are 334 naval participants; out of which 22 died. In order to avoid misunderstanding and to get necessary assistance naval planners used to coordinate in the planning phase with other sector commanders to carry out operation in their respective sectors. During the Liberation War East Pakistan was divided into 11 sectors. Each sector had a Commander and demarcated area of responsibility except sector 10. It is said that the area of responsibility of sector 10 was the coastal belt but in reality its operation was spread all over the country.[16]

In 1971, it was imperative for the occupation force to keep ports, harbors operative and the sea lines of communication open. The Bangladesh Navy fought to block the sea lines of communication as well as to make the sea and river ports inoperative. They attacked all the seaports including many river ports. Operation Jackpot is one of the most known successful operations. They carried out mining in Passur River Channel by Patrol Craft. With other fighters they also carried out attack against Pakistan Army. As a result, Bangladesh could become an independent state within the shortest possible time. Naval participation was extended to a great extent.[17]

After independence, especially in the 1970s, additional naval infrastructure was required. Two ex-Royal-Navy frigates joined Navy as BNS Umar Farooq and BNS Ali Haider in 1976 and 1978 respectively. Later, in 1982 a third ex-Royal-Navy frigate joined BN as BNS Abu Bakar. Inclusion of these three frigates is considered as the principal foundation of Bangladesh Navy. This has introduced the new born nation as a Limited Blue Water Navy to the world.[18]

In 2011, Bangladesh Navy's rescue and medical team, along with Army was deployed to Japan after Tōhoku earthquake and tsunami.[19] Bangladesh Navy have been an active disaster recovery force abroad. In 2013, the Navy deployed BNS Somudra Joy carrying humanitarian assistance worth of $1 million. Navy's medical team were also deployed to Philippines.[20]

Bangladesh Navy joined in the search operation of missing Malaysia Airlines Flight 370 with BNS Bangabandhu, BNS Umar Farooq and a Dornier Do-228NG MPA in March 2014. The aircraft was a Boeing 777-200ER which gone missing from the sky 12 Malaysian crew members and 227 passengers from 14 nations during the flight from Malaysia to China. Later, BNS Umar Farooq was replaced by BNS Somudra Joy. The search was renewed in May 2014 when an Australian exploration company claimed to have traced aircraft debris in the Bay of Bengal.[21] In 2014, During Water Crisis in Maldives, Bangladesh Navy was the first to launch humanitarian aid relief by deploying BNS Somudra Joy with 100 tonnes of bottled water.,[22]

In 2009, Bangladesh government adopted a long term modernization plan for its armed forces called Forces Goal 2030. Under this plan navy got more importance due to the strategic importance of Bay of Bengal and possibility of getting huge oil and gas in the bay. Due to disputes over maritime boundary with India and Myanmar navy become more important. As a result, several steps were taken to make navy a three dimensional deterrent force.

As part of the new modernization plan, BN received two ex-RN Castle-class OPVs and an Ex-RN Roebuck-class survey vessel. The Castle-class ships were converted into guided missile corvettes.[23] BN also received two Type 053H2 (Jianghu-III) frigate from PLAN as a stop-gap.[24] Two Durjoy-class Large Patrol Craft (LPC)/Corvettes were built in China and joined BN in 2013.[25] A US Coast Guard High Endurance Cutter joined BN in 2013,.[26] which is planned to be converted into a guided-missile frigate while another such ship has handed over to BN in May 2015. US offered third Hamilton Class Cutter in 2015.[27]

Two newly built Type 056 corvettes joined BN in 2016. Two more such corvettes were ordered in July 2015 and they are under construction now.[28]

Bangladesh Navy opened its aviation wing on 14 July 2011 with the induction of two AgustaWestland AW109 helicopters. Later on, two Dornier Do-228NG MPA was introduced in 2013.

To become a three dimensional deterrent force, the Bangladesh Navy is on the process of inducting two off the shelf Type 035G (Ming Class) submarines from China. A submarine base is under construction at Pekua in Cox's Bazar.[29] The boats are expected to arrive by the beginning of the year 2017.[30]

A new base for the Bangladesh Navy is being established at Rabanabad in Patuakhali. It will be Bangladesh's largest naval base with submarine berthing and aviation facilities.[31]

BN received it first locally made warship BNS Padma in January 2013.[32] All five units of the Padma-class Patrol Vessels were constructed at Khulna Shipyard (KSY) and all joined BN in 2013. At least two follow-up units of Durjoy-class LPCs are being built at KSY, started at the end of 2014. An underway replenishment ship for BN made at the Ananda Shipyard was launched in 2013.[33] The ship will significantly increase the length of stay of BN ships in the deep sea. Recently two Landing craft tank (LCT)s were built at Narayanganj Dockyard.[34]

In 1993 Bangladesh Navy's joined the United Nations Peacekeeping Operations.[35] Its first UN mission came in 2005, when a Bangladesh Navy contingent was sent to Sudan as Force Riverine Unit (FRU).[36][37]

Bangladesh Navy is currently serving in United Nations Interim Force in Lebanon (UNIFIL) in Lebanon since 2010, when two ships BNS Osman and BNS Madhumati were deployed there in May of that year. BN is the third Asian and only subcontinental navy to serve in that volatile region. BN maintained the two ships thousands of miles from Bangladesh in the Mediterranean Sea for four years until June 2014, when the ships were replaced by BNS Ali Haider and BNS Nirmul.[38]

BN ships regularly participate in exercises with other navies, gaining valuable experience and improving their fighting capabilities. CARAT is a yearly exercise conducted with the US Navy in the Bay of Bengal since 2011.[39] BN has sent an OPV to every MILAN multinational naval exercise held near the Andaman Islands since 2010.[40] AMAN, another multinational exercise held every two years in the Arab Sea, organized by Pakistan Navy, has also been participated by BN frigates since 2009.[41] BNS Bangabandhu participated in Exercise Ferocious Falcon, a Multinational Crisis Management Exercise, held at Doha, Qatar in November 2012,[42] while BNS Somudra Joy participated the same exercise in 2015.[43] BNS Abu Bakar took part in 14th Western Pacific Naval Symposium and International Fleet Review-2014 in Qingdao, Shandong Province of China in April 2014.[44] She also perticipated in Langkawi International Maritime and Aerospace Exhibition (LIMA)-2015 held at Malaysia.[45]

According to the Constitution of Bangladesh, the President of Bangladesh is the commander-in chief of Bangladesh Armed Forces. The Chief of Naval Staff (CNS), a four-star Admiral,[4] is the highest admiral, directs the non-combat and combatant operations from the Naval Headquarters (NHQ) in Dhaka. The headquarters has four branches: Operations (O), Personnel (P), Material (M) and Logistics (Log). Each branch is headed by officers who are titled as Principal Staff Officer (PSO) and known as Assistant Chief of Naval Staff (ACNS), e.g., ACNS (O). Under each PSO there are various Directorates headed by Directors with the rank of Captain. Under each Director there are Deputy Directors (DD) and Staff Officers (SO). The Bangladesh Navy has seven major combatant commands, each command is commanded by a Rear admiral or Commodore, who directly reports to Chief of Naval Staff.

Flag officers holding command or important positions in the Bangladesh Navy are as follows.

The Bangladesh Naval Academy, is the home of naval cadets for the future officers of Bangladesh Navy, and offers academic degrees programs at its academy. The academy also provides education, athletic and military training programs to the officers of allied navies, which includes many navy personnel from Qatar, Sri Lanka, Maldivean and Palestinian Navy.

The Special Warfare Diving and Salvage (reporting name: SWADS) is the principle and elite special operation force of the Bangladesh Navy. The unit was raised by the Bangladesh Navy in 2009 under the guidance of United States Navy SEALs for Direct action, Amphibious reconnaissance, Intelligence gathering and Counter-terrorism. The SWADS operatives are recruited from the Navy and trained in South Korea, Turkey and United States. The operatives go through a long and extremely tough training and the average drop rate during training is approximately 95%. Although the official strength remains classified, estimated strength is thought to be between 1500 and 2000 operatives. The sub-units inside SWADS includes SEAL, UDT, SBS, EOD, BPC and Sniper, giving the unit Sea, Land and Air Strike Capabilities.[47][48] 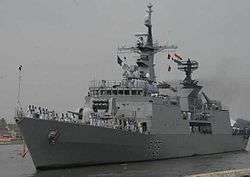 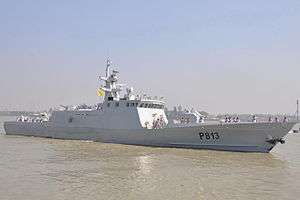 Bangladesh has made a long term modernization plan for its Armed Forces named Forces Goal 2030.[51] Under this goal, navy will be a three-dimensional deterrent force with operational capabilities in air, surface and underwater.[51] At the same time it has a plan to increase its surface combat capability by adding more ships as well as upgrading the current fleet.[51]

Second US Coast Guard Cutter BNS Somudra Avijan was handed over to Bangladesh Navy on 5 May 2015.[52] Meanwhile, another Hamilton class cutter has been offered to Bangladesh in May 2015.

Bangladesh navy has ordered two Type-035G (Ming class) submarines from China worth $200million in 2014 and have a plan to procure two more within 2020. The Ming class submarines will join navy by the year 2017.[30]

Bangladesh Navy has a plan to set up a new base at Rabanabad in Patuakhali, which will be the largest naval base of the country. The base will have submarine berthing and aviation facilities.[31]