For the type of mathematically defined curve, see Bézier curve.

Béziers (French pronunciation: ​[be.zje]; Occitan: Besièrs) is a town in Languedoc in southern France. It is a sub-prefecture of the Hérault department.[1] Béziers hosts the famous Feria de Béziers, centred on bullfighting, every August. A million visitors are attracted to the five-day event.[2] Béziers is a member of the Most Ancient European Towns Network.[3] 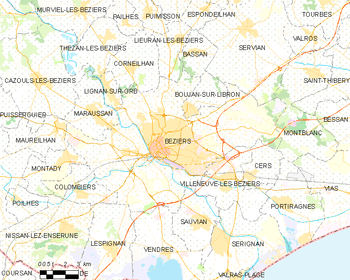 The town is located on a small bluff above the river Orb, about 10 km (6.2 mi) from the Mediterranean. At Béziers the Canal du Midi spans the river Orb as an aqueduct called the Pont-canal de l'Orb, claimed to be the first of its kind.[4]

Béziers is one of the oldest cities in France. The latest research (March 2013) shows that Béziers dates from 575 BC, making it older than Agde (525 BC) and a bit younger than Marseille (600 BC)[5]

The site has been occupied since Neolithic times, before the influx of Celts. Roman Betarra was on the road that linked Provence with Iberia. The Romans refounded the city as a new colonia for veterans in 36–35 BC and called it Colonia Julia Baeterrae Septimanorum. Stones from the Roman amphitheatre were used to construct the city wall during the 3rd century.

White wine was exported to Rome; two dolia discovered in an excavation near Rome are marked, one "I am a wine from Baeterrae and I am five years old", the other simply "white wine of Baeterrae". It was occupied by the Moors between 720 and 752.

From the 10th to the 12th century Béziers was the centre of a Viscountship of Béziers. The viscounts ruled most of the coastal plain around the city, including also the city of Agde. They also controlled the major east-west route through Languedoc, which roughly follows the old Roman Via Domitia, with the two key bridges over the Orb at Béziers and over the Hérault at Saint-Thibéry.

After the death of viscount William around 990, the viscounty passed to his daughter Garsendis and her husband, count Raimond-Roger of Carcassonne (d. c.1012). It was then ruled by their son Peter-Raimond (d. c.1060) and his son Roger (d. 1067), both of whom were also counts of Carcassonne.

Roger died without leaving any children and Béziers passed to his sister Ermengard and her husband Raimond-Bertrand Trencavel. The Trencavels were to rule for the next 142 years, until the Albigensian Crusade – a formal crusade (holy war) authorised by Pope Innocent III.

Béziers was a Languedoc stronghold of Catharism, which the Catholic Church condemned as heretical and which Catholic forces exterminated in the Albigensian Crusade.

Béziers was the first place to be attacked. The crusaders reached the town on July 21, 1209. Béziers' Catholics were given an ultimatum to hand over the heretics or leave before the crusaders besieged the city and to "avoid sharing their fate and perishing with them."[6] However, they refused and resisted with the Cathars. The town was sacked the following day and in the bloody massacre, no one was spared, not even Catholic priests and those who took refuge in the churches. One of the commanders of the crusade was the Papal Legate Arnaud-Amaury (or Arnald Amalaricus, Abbot of Citeaux). When asked by a Crusader how to tell Catholics from Cathars once they had taken the city, the abbot supposedly replied, Caedite eos. Novit enim Dominus qui sunt eius ("Kill them all, for the Lord knoweth them that are His"). (This oft quoted phrase is sourced from Caesarius of Heisterbach along with a story of all the heretics who desecrated a copy of the Gospels and threw it down from the town's walls.[7]) Amalric's own version of siege, described in his letter to Pope Innocent III in August 1209 (col. 139), states:

While discussions were still going on with the barons about the release of those in the city who were deemed to be Catholics, the servants and other persons of low rank and unarmed attacked the city without waiting for orders from their leaders. To our amazement, crying "to arms, to arms!", within the space of two or three hours they crossed the ditches and the walls and Béziers was taken. Our men spared no one, irrespective of rank, sex or age, and put to the sword almost 20,000 people. After this great slaughter the whole city was despoiled and burnt ...[8]

The invaders burned the cathedral of Saint Nazaire, which collapsed on those who had taken refuge inside. The town was pillaged and burnt. None was left alive. (A plaque opposite the cathedral records the 'Day of Butchery' perpetrated by the 'northern barons'.) A few parts of the Romanesque cathedral of St-Nazaire survived, and repairs started in 1215. The restoration, along with that of the rest of the city, continued until the 15th century.

In the repression following Louis Napoléon's coup d'état in 1851, troops fired on and killed Republican protesters in Béziers. Others were condemned to death or transported to Guiana, including a former mayor who died at sea attempting to escape from there. In the Place de la Révolution a plaque and a monument by Jean Antoine Injalbert commemorates these events. (Injalbert also designed the Fontaine du Titan in Béziers' Plâteau des Poètes park and the Molière monument in nearby Pézenas.)

The inhabitants of Béziers are known as Biterrois, after Baeterrae, the Roman name for the town. 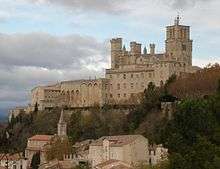 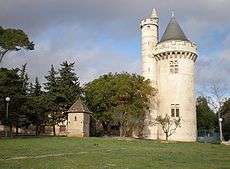 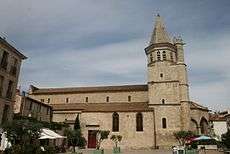 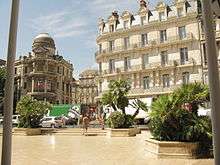 Other sites and monuments include: 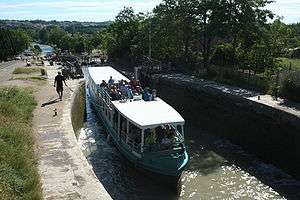 Today, Béziers is a principal centre of the Languedoc viticulture and winemaking industries, although there is still much unemployment in the city. In 2011, Béziers received a 12 million euro grant to start renovating the old city center. The historic Allees Paul Riquet will undergo a facelift in 2014.

The Gare de Béziers is a railway station with connections to Toulouse, Montpellier, Bordeaux, Marseille, Paris, Barcelona and several regional destinations. TGV trains stop in Béziers, but the tracks between Montpellier and Spain are not yet high speed tracks. A project is underway for completion around 2020 to build a new high speed track connecting Montpellier to Spain, and with a new TGV train station planned on the east side of Béziers.

Béziers Cap d'Agde Airport (previously Béziers-Agde-Vias Airport), owned by the Chamber of Commerce and Industry, provides connections to destinations in northern Europe. Following an extension to the runway which was completed in March 2007, Ryanair began flights to and from Bristol Airport in March 2008, and later to London Stansted and London Luton Airport.[9] Current (Jan. 2013) destinations from this airport with Ryanair are Bristol, London Luton Airport, Paris Beauvais, Oslo Rygge, Manchester, Edinburgh, Weeze Airport[10] and Stockholm Skavsta, while Flybe serves Southampton.[11]

Béziers' rugby union team (AS Béziers) has twelve championships to its credit. 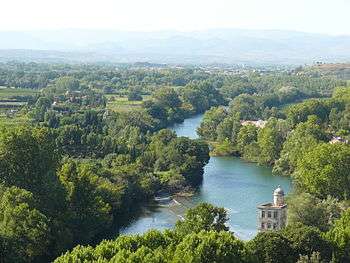 View from Béziers to the river Orb

Béziers was the birthplace of:

Béziers is twinned with:[12]