For other uses, see Bracelet (disambiguation). 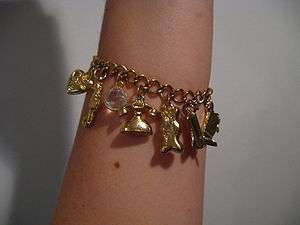 A bracelet is an article of jewellery that is worn around the wrist. It may have a supportive function, such as holding a wristwatch or other items of jewellery such as religious symbols or charms. Medical and identity information is marked on some bracelets, such as allergy bracelets, hospital patient-identification tags, and bracelet tags for newborn babies. If a bracelet is a single, inflexible loop, it is often called a bangle. When it is worn around the ankle it is called an ankle bracelet or anklet. A boot bracelet is used to decorate boots. Colloquially, handcuffs are sometimes called bracelets. Bracelets can be manufactured from metal, leather, cloth, plastic or other materials and sometimes contain jewels, rocks, wood, shells, crystals, metal or plastic hoops, pearls and many more materials. 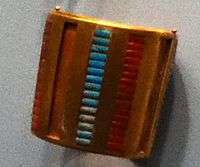 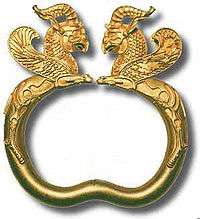 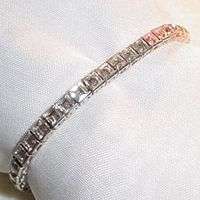 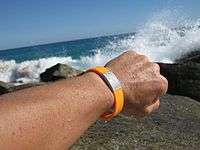 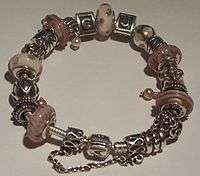 Although the term armlet may be technically similar, it is taken to mean an item that sits on the upper shoulder: an arm ring. The origin of the term 'bracelet' is from the Greek 'brachile' meaning 'of the arm', via the Old French 'bracel'. A bracelet is also a small brace or bracer (an arm-guard used by archers).

The history of Egyptian bracelets is as old as 5000 BCE. Starting with materials like bones, stones and woods to serve religious and spiritual interests. From the National Geographic Society, the Scarab Bracelet is one of the most recognized symbols of ancient Egypt. The scarab represented rebirth and regeneration. Carved scarabs were worn as jewelry and wrapped into the linen bandages of mummies. Myth told of the scarab god, Khepri, pushing the sun across the sky.

In 2008, Russian archaeologists from the Institute of Archaeology and Ethnology of Novosibirsk, working at the site of Denisova Cave in the Altai Mountains of Siberia, uncovered a small bone fragment from the fifth finger of a juvenile hominin, dubbed the "X woman" (referring to the maternal descent of mitochondrial DNA,[1]) or the Denisova hominin. Artifacts, including a bracelet, excavated in the cave at the same level were carbon dated to around 40,000 BP.

In Bulgaria there is a tradition called Martenitsa, which sometimes involves tying a red and white string around the wrist to please Baba Marta in order for spring to come sooner.

In Greece a similar tradition, weaving a bracelet from red and white string on the first day of March and wearing it till the end of summer, is called "Martis" and is considered to help protect the wearer's skin from the strong Greek sun.

In some parts of India, the number and type of bangles worn by a woman denotes her marital status.

In Sikhism a bracelet is one of the mandatory articles known as the Five Virtues.

In Latin America, Azabache Bracelets are worn to protect against the Mal de ojo, or evil eye. The evil eye is believed to result of excessive admiration or envious looks by others. Having newborn babies wear an azabache (a gold bracelet or necklace with a black or red coral charm in the form of a fist), is believed to protect them from the evil eye. 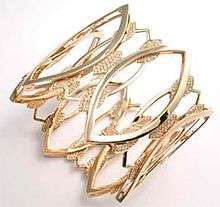 Bracelet made of yellow gold with diamonds Brazil

Taken in the plural, bracelets is often used as slang for handcuffs.

A charm bracelet is an item of jewelry worn around the wrist. It carries personal charms: decorative pendants or trinkets which are signifiers of important things in the wearer's life. In recent history, Italian charm bracelets have become trendy. While traditional charms dangle, Italian charms feature individual pieces soldered flat onto the surface of the link.

Rigid bracelets, usually from metal, wood, or plastic, are referred to as bangles or bangle bracelets. They can be smooth, textured or set with stones. In India, glass bangles are common. Made from ordinary glass that is about 1/4 – 1/8 inch in width, they are worn in groups so that arm movement causes them to make a gracious sound rather like the clinking of wind chimes. In India, it is also common that young children will wear thin gold bangles on their hands and ankles.[2]

A spring closing type of bangle is used as both an adornment and a handy clip to hang things from. Marketed as a handbag hanger.

In the late 1980s and early 1990s, "slap bracelets" – flat, felt-covered metal strips that curved around one's wrist when gently hit against it—were a popular fad. Often adorned with neon colors and vivid graphics, these bracelets could be found at inexpensive retailers. A rumor emerged that "slap bracelets" caused bleeding and puncture wounds and thus fell out of style.

Usually made from loose beads with a center hole and connected by a piece of string or elastic band through the holes.

Bracelets made from connecting or linking various or similar components or jewelry findings. Link bracelets can be made of a variety of materials included metals and gemstones.

Alternative health bracelets, such as ionized bracelets, karma bracelets, magnetic bracelets, Power Balance hologram bracelets, etc., are a separate group not distinguished by their design but by the beneficial function claimed for them by their manufacturers and distributors. Karma bracelets are made from wood beads and may contain various charms. Associated with bringing good luck and good karma to those who choose to wear it. No claims of effectiveness made by manufacturers have ever been substantiated by independent sources.

The use of colored silicone rubber as a material for producing sports bracelets was popularized by Nike and Lance Armstrong through the Yellow Livestrong wristband starting in May 2003.[3] Their success has led to the silicone bracelet becoming a high cost tool for various awareness, information, and charity campaigns. This can be likened to the use of awareness ribbons for similar purposes. These bracelets are also known as "baller id bands", "baller bands" or "wristbands" . They can also be referred to as rubber wristbands, silicone wristbands or gel wristbands.[4]