This article is about the mineral. For other uses, see Onyx (disambiguation).
"Black Onyx" redirects here. For the 1984 video game, see The Black Onyx.

Onyx is a banded variety of the oxide mineral chalcedony. Agate and onyx are both varieties of layered chalcedony that differ only in the form of the bands: agate has curved bands and onyx has parallel bands. The colors of its bands range from white to almost every color (save some shades, such as purple or blue). Commonly, specimens of onyx contain bands of black and/or white.[3]

Onyx comes through Latin (of the same spelling), from the Greek ὄνυξ, meaning "claw" or "fingernail". With its fleshtone color, onyx can be said to resemble a fingernail. The English word "nail" is cognate with the Greek word.[4] 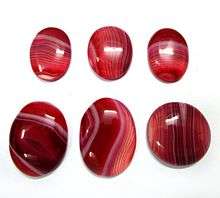 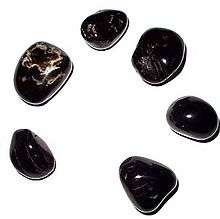 Black onyx with bands of colors

Onyx is formed of bands of chalcedony in alternating colors. It is cryptocrystalline, consisting of fine intergrowths of the silica minerals quartz and moganite. Its bands are parallel to one another, as opposed to the more chaotic banding that often occurs in agates.[5]

Sardonyx is a variant in which the colored bands are sard (shades of red) rather than black. Black onyx is perhaps the most famous variety, but is not as common as onyx with colored bands. Artificial treatments have been used since ancient times to produce both the black color in "black onyx" and the reds and yellows in sardonyx. Most "black onyx" on the market is artificially colored.[6][7]

The name has sometimes been used, incorrectly, to label other banded lapidary materials, such as banded calcite found in Mexico, Pakistan, and other places, and often carved, polished and sold. This material is much softer than true onyx, and much more readily available. The majority of carved items sold as "onyx" today are this carbonate material.[8][9]

Artificial onyx types have also been produced from common chalcedony and plain agates. The first-century naturalist Pliny the Elder described these techniques being used in Roman times.[10] Treatments for producing black and other colors include soaking or boiling chalcedony in sugar solutions, then treating with sulfuric or hydrochloric acid to carbonize sugars which had been absorbed into the top layers of the stone.[7][11] These techniques are still used, as well as other dyeing treatments, and most so-called "black onyx" sold is artificially treated.[12] In addition to dye treatments, heating and treatment with nitric acid have been used to lighten or eliminate undesirable colors.[7]

Onyx is a gemstone found in various regions of the world including Yemen, Uruguay, Argentina, Australia, Brazil, Canada, China, Czech Republic, Germany, India, Indonesia, Pakistan, Madagascar, Latin America, the UK, and various states in the US.[1] 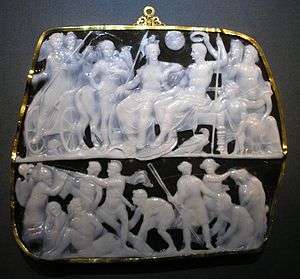 It has a long history of use for hardstone carving and jewelry, where it is usually cut as a cabochon or into beads. It has also been used for intaglio and hardstone cameo engraved gems, where the bands make the image contrast with the ground.[13] Some onyx is natural but much of the material in commerce is produced by the staining of agate.[14]

Onyx was used in Egypt as early as the Second Dynasty to make bowls and other pottery items.[15] Use of sardonyx appears in the art of Minoan Crete, notably from the archaeological recoveries at Knossos.[16]

Onyx was known to the Ancient Greeks and Romans.[21] The first-century naturalist Pliny the Elder described both type of onyx and various artificial treatment techniques in his Naturalis Historia.[10]

Slabs of onyx (from the Atlas Mountains) were famously used by Mies van der Rohe in Villa Tugendhat at Brno (completed 1930) to create a shimmering semi-translucent interior wall.[22]

The Hôtel de la Païva in Paris is noted for its yellow onyx décor, and the new Mariinsky Theatre Second Stage in Moscow uses yellow onyx in the lobby.

The ancient Romans entered battle carrying amulets of sardonyx engraved with Mars, the god of war. This was believed to bestow courage in battle. In Renaissance Europe, wearing sardonyx was believed to bestow eloquence.[23] A traditional Persian belief is that it helped with epilepsy.[24] Sardonyx was traditionally used by English midwives to ease childbirth by laying it between the breasts of the mother.[25]