Not to be confused with Lorimar. 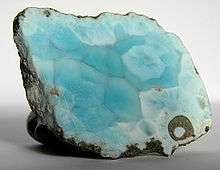 Larimar, also called "Stefilia's Stone", is a rare blue variety of the silicate mineral pectolite found only in the Dominican Republic, in the Caribbean. Its coloration varies from white, light-blue, green-blue to deep blue.[1]

The Dominican Republic's Ministry of Mining records show that on 23 November 1916, Father Miguel Domingo Fuertes Loren of the Barahona Parish requested permission to explore and exploit the mine of a certain blue rock he had discovered. Pectolites were not yet known in the Dominican Republic, and the request was rejected.[2]

In 1974, at the foot of the Bahoruco Range, the coastal province of Barahona, Miguel Méndez and Peace Corps volunteer Norman Rilling rediscovered Larimar on a beach. Natives, who believed the stone came from the sea, called the gem Blue Stone. Miguel took his young daughter's name Larissa and the Spanish word for sea (mar) and formed Larimar, by the colors of the water of the Caribbean Sea, where it was found. The few stones they found were alluvial sediment, washed into the sea by the Bahoruco River. An upstream search revealed the in situ outcrops in the range and soon the Los Chupaderos mine was formed.[1][2]

Larimar is a type of pectolite, or a rock composed largely of pectolite, an acid silicate hydrate of calcium and sodium. Although pectolite is found in many locations, none have the unique volcanic blue coloration of larimar. This blue color, distinct from that of other pectolites, is the result of copper substitution for calcium.[3]

Miocene volcanic rocks, andesites and basalts, erupted within the limestones of the south coast of the island. These rocks contained cavities or vugs which were later filled with a variety of minerals including the blue pectolite. These pectolite cavity fillings are a secondary occurrence within the volcanic flows, dikes and plugs. When these rocks erode the pectolite fillings are carried downslope to end up in the alluvium and the beach gravels. The Bahoruco River carried the pectolite bearing sediments to the sea.[1] The tumbling action along the streambed provided the natural polishing to the blue larimar which makes them stand out in contrast to the dark gravels of the streambed.

The most important outcrop of blue pectolite is located at Los Chupaderos, in the section of Los Checheses, about 10 km (6.2 mi) southwest of the city of Barahona, in the south-western region of the Dominican Republic. It is a single mountainside now perforated with approximately 2,000 vertical shafts, surrounded by rainforest vegetation and deposits of blue-colored mine tailings.[1][2] 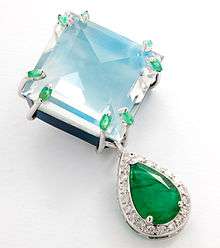 Pendant of larimar with emerald

Larimar jewelry is offered to the public in the Dominican Republic, and elsewhere in the Caribbean as a local speciality. Most jewelry produced is set in silver, but sometimes high-grade larimar is also set in gold. It also has become available elsewhere. Some Far East manufacturers have started to use it in their production and buy large quantities of raw stones as long as this is still permitted.

Quality grading is according to coloration and the typical mineral crystal configuration in the stone. Larimar also comes in green and even with red spots, brown strikes, etc., due to the presence of other minerals and/or oxidation. But the more intense the blue color and the contrast in the stone, the higher and rarer is the quality. The blue color is photosensitive and fades with time if exposed to too much light and heat.[2]