Spinel (pronunciation: /ˈspɪnɛl/) is the magnesium aluminium member of the larger spinel group of minerals. It has the formula MgAl2O4 in the cubic crystal system. Its name comes from Latin "spina" (arrow).[1] Balas ruby is an old name for a rose-tinted variety. 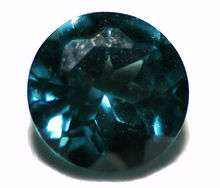 Spinel crystallizes in the isometric system; common crystal forms are octahedra, usually twinned. It has an imperfect octahedral cleavage and a conchoidal fracture. Its hardness is 8, its specific gravity is 3.5–4.1, and it is transparent to opaque with a vitreous to dull luster. It may be colorless, but is usually various shades of red, blue, green, yellow, brown, black, or (uncommon) violet. There is a unique natural white spinel, now lost, that surfaced briefly in what is now Sri Lanka. Some spinels are among the most famous gemstones: among them are the Black Prince's Ruby and the "Timur ruby" in the British Crown Jewels, and the "Côte de Bretagne", formerly from the French Crown jewels. The Samarian Spinel is the largest known spinel in the world, weighing 500 carats (100 g).

The transparent red spinels were called spinel-rubies or balas rubies. In the past, before the arrival of modern science, spinels and rubies were equally known as rubies. After the 18th century the word ruby was only used for the red gem variety of the mineral corundum and the word spinel came to be used. "Balas" is derived from Balascia, the ancient name for Badakhshan, a region in central Asia situated in the upper valley of the Panj River, one of the principal tributaries of the Oxus River. Mines in the Gorno Badakhshan region of Tajikistan was for centuries the main source for red and pink spinels.

Spinel has long been found in the gemstone-bearing gravel of Sri Lanka and in limestones of the Badakshan Province in modern-day Afghanistan and Tajikistan; and of Mogok in Burma. Recently gem quality spinels also found in the marbles of Luc Yen (Vietnam), Mahenge and Matombo (Tanzania), Tsavo (Kenya) and in the gravels of Tunduru (Tanzania) and Ilakaka (Madagascar). Spinel is found as a metamorphic mineral, and also as a primary mineral in rare mafic igneous rocks; in these igneous rocks, the magmas are relatively deficient in alkalis relative to aluminium, and aluminium oxide may form as the mineral corundum or may combine with magnesia to form spinel. This is why spinel and ruby are often found together.

Spinel, (Mg,Fe)(Al,Cr)2O4, is common in peridotite in the uppermost Earth's mantle, between approximately 20 km to approximately 120 km, possibly to lower depths depending on the chromium content.[3] At significantly shallower depths, above the Moho, calcic plagioclase is the more stable aluminous mineral in peridotite while garnet is the stable phase deeper in the mantle below the spinel stability region.

Spinel, (Mg,Fe)Al2O4, is a common mineral in the Ca-Al-rich inclusions (CAIs) in some chondritic meteorites.

Synthetic spinel, accidentally produced in the middle of the 18th century, has been described more recently in scientific publications in 2000 and 2004.[4] By 2015, transparent spinel was being made in sheets and other shapes through sintering.[5] Synthetic spinel which looks like glass but has notably higher strength against pressure, can also have applications in military and commercial use.[6]