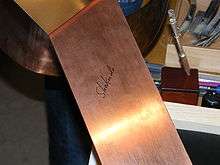 Shakudō (赤銅) is a billon of gold and copper (typically 4–10% gold, 96–90% copper) which can be treated to form an indigo/black patina resembling lacquer. Unpatinated shakudō visually resembles bronze; the dark color is induced by applying and heating rokushō, a special patination formula.

Shakudō was historically used in Japan to construct or decorate katana fittings such as tsuba, menuki, and kozuka; as well as other small ornaments. When it was introduced to the West in the mid-19th century, it was thought to be previously unknown outside Asia, but recent studies have suggested close similarities to certain decorative alloys used in ancient Egypt, Greece, and Rome.[1] Modern jewelry artisans have revived the use of shakudō as a striking design element, especially for the technique of mokume-gane.

Due to the expensive gold content, shakudō is normally limited to accents or small items such as tsuba. Larger objects (such as vases) described as shakudō may be mislabeled, especially if the glossy blue-black color is not evident. Unpatinated or repolished shakudō will not spontaneously patinate in air.

Shakudō is sometimes inaccurately used as a general term for damascened decorative metal inlays of Japanese origin. These were widely known in the West as Amita damascene, from the name of a 20th-century manufacturer of such items for export. Amita damascene included shakudo, shibuichi, gold, silver, and bronze for inlays.