Marcasite mär′ka-sīt an iron ore, a variety of pyrites (q.v.). 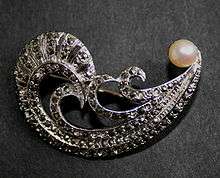 Marcasite brooch made from pyrite and silver

Marcasite jewelry has been made since the time of the Ancient Greeks.[1] It was particularly popular in the eighteenth century, the Victorian era and with Art Nouveau jewelry designers.[1][2]

When Prince Albert died in 1861 Queen Victoria entered a period of mourning, requiring her entire court to wear black and avoid opulent jewelry. Marcasite became popular as an understated alternative for the nobility.[3]

Marcasite jewelry is jewelry made from pyrite (fool's gold), not, as the name suggests, from marcasite.[4] Pyrite is similar to marcasite, but more stable and less brittle. It is frequently made by setting small pieces of pyrite into silver.[2] Cheaper costume jewelry is made by glueing pieces of pyrite rather than setting.[1] A similar-looking type of jewelry can be made from small pieces of cut steel.[1][4]