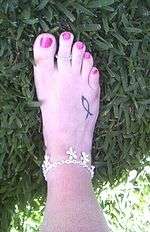 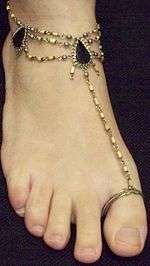 A toe ring with attached anklet.

An anklet, also called ankle chain, ankle bracelet or ankle string, is an ornament worn around the ankle.[1] Barefoot anklets and toe rings historically have been worn for centuries by girls and women in India, where it is commonly known as payal. They have also been worn by Egyptian women since predynastic times. In the United States both casual and more formal anklets became fashionable from the 1930s to the late twentieth century. While in western popular culture both younger men and women may wear casual leather anklets, they are popular among barefoot women. Formal anklets (of silver, gold, or beads) are used by some women as fashion jewellery. Anklets are an important piece of jewellery in Indian marriages worn along with saris.

Occasionally, anklets on both ankles are joined by a chain to limit the step. This practice was once prevalent in South East Asia, where the effect was to give a 'feminine' short tripping step. Today, a few western women follow this practice, but rarely in public. More rarely still, some people wear 'permanent' (e.g. soldered-on) ankle chains and even connecting chains.

Anklets were worn as an everyday ornament by Egyptian women of all social classes in ancient Egypt from as early as predynastic times. The name for anklets was not much different from that of bracelets being menefret (mnfrt) except by adding a phrase to denote connection to the feet. They were made of different metals and in multiple shapes, with more expensive metals like gold being more common among the rich, while less expensive ones like silver and iron more common among lower social classes. During the fourth, fifth, and sixth dynasties, anklets were usually made of beads threaded in several rows held together with spacer-bars. Anklets were also worn by dancers like those shown in the tombs of Kagemni, Ti, and Akh-hotp.[2]

In the early twentieth century, anklets were commonly worn by Egyptian women of inner cities. They were called kholkhal (pl. khalakheel) and were most classically worn by women of Alexandria, along with a classic traditional dress covered by a one-piece black cloth called melaya leff.

Bronze anklets are visible as early as the Bronze Age in temperate Europe, in an area roughly along the Danube, in the Alpine foreland, up the Rhine to the Atlantic, and also down the Rhône (Sherratt, 2001). These were found among hoards in these areas, along with other bronze items characteristic of this time (c. 1800 BCE onwards), and are attributable to the Tumulus culture that spread across this region.

A first-century CE epic of Tamil literature called Cilappatikaram ("The story of the anklet") dealt with a woman whose husband was killed while trying to sell one of her anklets to a dishonest goldsmith. The anklets are described in great detail in the poem.

Rajasthani women wear the heaviest type of anklets, which are silver and signify tribal adherence. The women wear these as costume jewelry, but also to show their bravery as a tribe against other rival tribes. The fashion for heavy anklets is declining in India now, but is still common in rural areas.

In the eastern Indian state of Odisha, which is famous for its traditional jewelry, there are varieties of anklets known as Paunji Nupur, which are worn by women. Another variety, which covers the entire foot, is known as Padapadma. In ancient times men also wore anklets. Traditionally, only Kshatriya (Royal/Warrior caste) people can wear gold anklets, and other castes wear silver anklets.

The word Payal is a word for the anklet in Hindi and Punjabi. 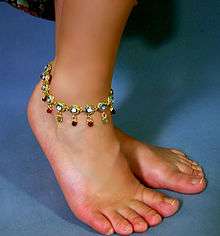 Anklets can be made of silver, gold, and other less precious metals as well as leather, plastic, nylon and other such materials. In the western world anklets or ankle chains are mainly worn by younger females, but some older women also wear them.

Metal anklets are of two types - flexible and inflexible. The flexible ones, often called paayal, pajeb or jhanjhar in India, are made by tying links in a chain. Subsequently, sonorous bells can be attached to the chain, so that the wearer can make pleasing sounds while walking. Inflexible ones are usually created by giving shape to a flat metal sheet.

The sound was also a reminder for people that there was a woman around, during the times of Purdah.

A pair of ghungru

Salangai or Ghunghru are small bells that bharatnatyam, kathak, kuchipudi, and odissi dancers tie around their ankles.

In eastern cultures, particularly India, anklets are worn on both ankles. In the west they are normally seen worn on one ankle.

Scuba divers sometimes wear lead anklets to stop a tendency for their legs to float up when diving in a drysuit.