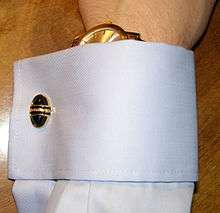 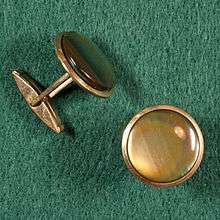 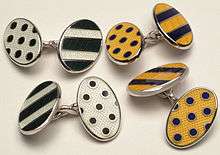 Pairs of silk knot links; they can conveniently be held together as a pair by the elastic when not in use 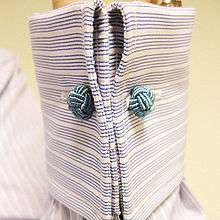 This French cuff is fastened with silk knots.

Cufflinks are used to secure button shirt cuffs and may also be an item of jewellery for boys and men. Cufflinks can be manufactured from a variety of different materials, such as glass, stone, leather, metal, precious metal or combinations of these. Securing of the cufflinks is usually achieved via toggles or reverses based on the design of the front section, which can be folded into position. In addition, there are also variants with chains or a rigid, bent rear section. The front sections of the cufflinks can be decorated with gemstones, inlays, inset material or enamel and designed in two or three-dimensional form.

Cufflinks are designed only for use with shirts which have buttonholes on both sides but no buttons. These may be either single or double-length ("French") cuffs, and may be worn either "kissing," with the ends pinched together, or "barrel-style," with one end overlapping the other. The "barrel-style" was popularized by a famous 19th century entertainer and clown, Dan Rice; however, "kissing" cuffs are usually preferred.

Cufflink designs vary widely, with the most traditional the "double-panel", consisting of a short post or (more often) chain connecting two disc-shaped parts, both decorated. Other types have a flat decorated face for one side, while the other side shows only the swivel-bar and its post. The swivel bar is placed vertically (aligned with the post) to put the links on and off, then horizontally to hold them in place when worn. The decorated face on the most visible side is usually larger; a variety of designs can connect the smaller piece: It may be small enough to fit through the button hole like a button would; it may be separated and attached from the other side; or it may have a portion that swivels on the central post, aligning with the post while the link is threaded through the button-hole and swiveling into a position at right angles to the post when worn. Links of knotted brightly coloured silk enjoyed renewed popularity in the 1990s, joined by an elasticated section.

The visible part of a cufflink is often monogrammed or decorated in some way, such as with a birthstone or something which reflects a hobby or association. There are numerous styles including novelty, traditional, or contemporary. Cufflinks can and have been worn with casualwear, informal attire or business suits, all the way to very dressy styles such as semi-formal (black tie or Stroller), and formal wear (morning dress or white tie), where they become essentially required and are matched with shirt studs. While whimsical or ornate styles can be worn to casual or informal events, formal wear has stricter expectations, with pearl cufflinks being preferred for white tie events[1] Traditionally it was considered important to coordinate the metal of one's cufflinks with other jewelry such as watch case, belt buckle, tie bar or rings. Sartorial experts prescribe gold to be worn during the daytime and silver for evening wear, but neither expectation is considered as critical as it once was.[2]

An alternative type of cufflink is the cheaper silk knot which is usually two conjoined monkey's fist or Turk's head knots. The Paris shirtmaker Charvet is credited with their introduction in 1904.[3] They became quickly popular: "Charvet [link] buttons of twisted braid are quite the style" noted The New York Times in 1908.[4] French cuff shirts are often accompanied with a set of colour-coordinated silk knots instead of double-button cufflinks. They are now often not from silk, and consist of a fabric over an elasticated core. Owing to the popularity of this fashion, metal cufflinks shaped to look like a silk knot are also worn.

Although the first cufflinks appeared in the 1600s, they did not become common until the end of the 18th century. Their development is closely related to that of the men's shirt. Men have been wearing shirt-like items of clothing since the invention of woven fabric 5,000 years BC. Although styles and methods of manufacturing changed, the underlying form remained the same: a tunic opened to the front with sleeves and collar. The shirt was worn directly next to the skin, it was washable and thereby protected the outer garments from contact with the body. Conversely, it also protected the skin against the rougher and heavier fabrics of jackets and coats by covering the neck and wrists.

After the Middle Ages the visible areas of the shirt (neck, chest and wrists) became sites of decorative elements such as frills, ruffs and embroidery. The cuffs were held together with ribbons, as were collars, an early precursor of neckties. Frills that hung down over the wrist were worn at court and other formal settings until the end of the 18th century, whilst in the everyday shirts of the time the sleeves ended with a simple ribbon or were secured with a button or a connected pair of buttons.

In the 19th century the former splendour of the aristocracy was superseded by the bourgeois efficiency of the new employed classes. From then onward men wore a highly conventional wardrobe: a dark suit by day, a dinner jacket or tailcoat in the evening. By the middle of the 19th century the modern cufflink became popular. The shirt front as well as collar and cuffs covering areas of the most wear were made sturdier. This was practical but when clean and starched, collars and cuffs underscored the formal character of the clothing. However, they could be too stiff to secure the cuffs with a simple button. As a consequence, from the mid 19th century onward men in the middle and upper classes wore cufflinks. The industrial revolution meant that these could be mass-produced, making them available in every price category.

Coloured cufflinks made from gemstones were initially only worn by men with a great deal of self-confidence, however. This situation changed when the Prince of Wales, later Edward VII, popularised colourful Fabergé cufflinks by the 19th century. During this time cufflinks became fashion accessories and one of the few acceptable items of jewellery for men in Britain and the U.S.

This development continued into the early 1900s, with more cufflinks worn than ever before. These were available in every type of form, colour and material, incorporating both gemstones and less precious stones and glass in cheaper copies. Intricate coloured enamelled cufflinks in every conceivable geometric pattern were especially popular. All of these were of equal value, as Coco Chanel had made fashion jewellery acceptable to wear. In a parallel development, however, a sportier style of shirt emerged with unstarched cuffs that could be secured with simple buttons. 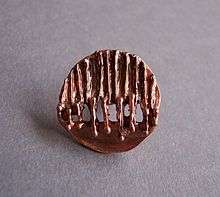 Cufflink made in Idar-Oberstein in the 1960s 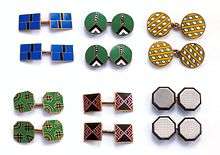 Cufflinks made by Victor Mayer, Pforzheim, in the 1930s

This spread to Europe as well over the same period. In Germany, Idar-Oberstein and Pforzheim were key centres of cufflink production. Whilst in Idar-Oberstein cufflinks were produced using simple materials for the more modest budget, the Pforzheim jewellery manufacturers produced for the medium and upper segments using genuine gold and silver. In Pforzheim premium cufflinks are still produced today, some of them to historic patterns, some modern, all of them using traditional craftsmanship.

Following the end of shortages related to the Second World War, into the 1950s a gentleman liked to adorn himself with a whole range of accessories, comprising items such as cigarette case, lighter, tie pin or tie bar, watch (now worn mostly on the wrist instead of the pocket), ring, key chain, money clip, etc., an ensemble that also included a wide range of cufflinks.

In the 1970s cufflinks were less emphasized in much of middle class fashion. Fashion was dominated by the Woodstock generation, with shirts primarily manufactured complete with buttons and buttonholes. Many fine heirlooms were reworked into earrings.

The 1980s saw a return to traditional cufflinks, as part of a general revival in traditional male dress. This trend has more or less continued to this day.

Cufflinks pose designers a challenge as there is little leeway for their design, the cufflink must fit snugly and if different motifs are chosen for the four buttons of a pair, these must go well with one another.