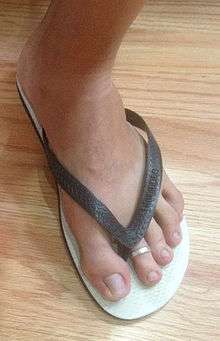 A toe ring being worn.

A toe ring with attached anklet 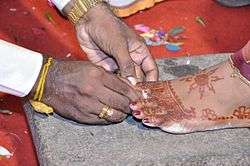 A toe ring is a ring made out of metals and non-metals worn on any of the toes. The second toe of either foot is where they are worn most commonly. This is because proportionately it's the longest toe and thus the easiest toe to put a ring on and stay without being connected to anything else. In most western countries they are a relatively new fashion accessory, and typically have no symbolic meaning. They are usually worn with barefoot sandals, anklets, bare feet or flip flops.

Like finger rings, toe rings come in many shapes and forms, from intricately designed flowers embedded with jewels to simple bands. Fitted toe rings are rings that are of one size, whereas adjustable toe rings have a gap at the bottom so they can be easily made to fit snugly.

Wearing of toe rings is practiced in India. Toe rings have been a part of the Indian culture since the Ramayana times, there has been a mention of Sita, when abducted by Ravana, threw her toe ring in the way, so that lord Rama could find her. So from the Ramayana times, till now, toe rings have been a part of a married woman’s jewellery box. In many different Indian cultures, the husband puts the toe rings on his wife’s second toe of both feet, during the wedding ceremony. It is worn as a symbol of the married state by Hindu women and is called bichiya (pronounced: bee-chee-ya) in Hindi, minji (മിഞ്ചി) in Malayalam jodavi (जोडवी) in Marathi, Mettelu (మెట్టెలు) in Telugu, Metti/Kanaiyazhi in Tamil (மெட்டி/கணையாழி), Kaalungura (ಕಾಲುಂಗುರಗಳು) in Kannada.

The toe rings in India are usually made of silver and worn in pairs (unlike the trend in Western countries, where they are worn singly or in unmatched pairs) on the second toe of both feet. Traditionally they are quite ornate, though more contemporary designs are now being developed to cater to the modern bride. Some 'bichiya sets' may have pairs for four of the five toes, excluding the little pinky. 'Bichiyas' may not be made of gold, as gold holds a 'respected' status and may not be worn below the waist by Hindus, but this is not followed very strictly and toe rings made of gold and diamonds are commonly seen. This rings would be put on the toes and never removed. The rings would show that the woman is married.

Toe rings have other associated benefits as indicated in Auyrveda. Toe rings have been indicated to be worn to regulate the menstrual cycle, and thus increase the chances of conception, as the slight pressure on the second toe ensures a healthy uterus. Some cultures also say that the pressure felt on the second toe helps ease the pain during intercourse. Unmarried Hindu girls however put toe rings on the third toe, to help ease with the menstrual pain.

Toe rings are also worn by men in Tamil culture, usually in a simpler design for comfort. The practice of Tamil men wearing toe rings/Metti was ideal because in ancient times people used to walk around barefoot and the toe ring was a way for women to identify married men as it was the norm for women to look down.[1]

In the 19th century mirror rings (i.e. rings with a small used mirror placed on them) were sometimes worn on the great toe assumed to be for decorative purposes. Nowadays toe rings are available in rubber,non-precious metal and are used for decorative purposes. Traditionally a large ring was worn on the great toe of the left foot to indicate a married status. Some men frequently wore a ring on the big toe for curative purposes or to augment their masculine vigor. These rings were seldom closed circles but open hoops so that they could easily be removed.[2] [3]

Toe rings were introduced to the United States by Marjorie Borell who, after returning from India began manufacturing and selling them in New York in 1973. Her first retail outlet was Fiorucci, a trendy fashion retailer located on 59th Street in New York. The "Original Toe Ring Boutique" sold toe rings in silver, gold and with diamonds. She eventually sold them in Bloomingdale's and many other retail outlets but because her designs could not be patented, she moved on to other ventures but retains the title of Toe Ring Lady to this day.