Carnelian (also spelled cornelian[2]) is a brownish-red mineral which is commonly used as a semi-precious gemstone. Similar to carnelian is sard, which is generally harder and darker (the difference is not rigidly defined, and the two names are often used interchangeably). Both carnelian and sard are varieties of the silica mineral chalcedony colored by impurities of iron oxide. The color can vary greatly, ranging from pale orange to an intense almost-black coloration. It is most common in Brazil, India, Siberia and Germany. 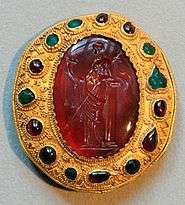 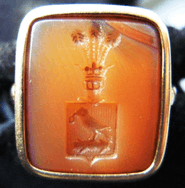 The bow drill was used to drill holes into carnelian in Mehrgarh between 4th-5th millennium BC.[3] Carnelian was recovered from Bronze Age Minoan layers at Knossos on Crete in a form that demonstrated its use in decorative arts;[4] this use dates to approximately 1800 BC. Carnelian was used widely during Roman times to make engraved gems for signet or seal rings for imprinting a seal with wax on correspondence or other important documents. Hot wax does not stick to carnelian.[5] Sard was used for Assyrian cylinder seals, Egyptian and Phoenician scarabs, and early Greek and Etruscan gems.[6] The Hebrew odem (translated sardius), the first stone in the High Priest's breastplate, was a red stone, probably sard but perhaps red jasper.[6]

Although now the more common term, "carnelian" is a 16th-century corruption of the 14th-century word "cornelian" (and its associated orthographies corneline and cornalyn).[8] Cornelian, cognate with similar words in several Romance languages, comes from the Mediaeval Latin corneolus, itself derived from the Latin word cornum, the cornel cherry,[9] whose translucent red fruits resemble the stone. The Oxford English Dictionary calls "carnelian" a perversion of "cornelian", by subsequent analogy with the Latin word caro, carnis, flesh. According to Pliny the Elder, sard derives its name from the city of Sardis in Lydia, but it more likely comes from the Persian word سرد sered, meaning yellowish red.[6]

Distinction between carnelian and sard

The names carnelian and sard are often used interchangeably, but they can also be used to describe distinct subvarieties. The general differences are as follows:[6]

All of these properties vary across a continuum, and so the boundary between carnelian and sard is inevitably blurred.