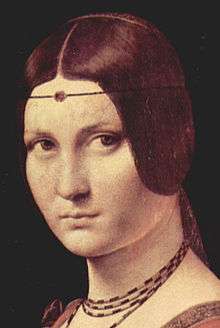 A ferronnière is a style of headband that encircles the wearer's forehead, usually with a small jewel suspended in the centre.[1] It was worn in the late fifteenth century and was revived in the second quarter of the nineteenth century for both day and evening wear.[2][3] It is often said to be named after a portrait attributed to the school of Leonardo da Vinci, the La belle ferronnière, where the sitter wears such an ornament.[2][3][4] Whilst the painting was erroneously identified in the eighteenth century as the wife of an iron merchant, Le Féron, and assumed to be the namesake of the nineteenth century ornament, the term 'ferronnière' was a contemporary 1490s term for such headbands.[5][6] The nineteenth century revival of the ferronnière was worn from the late 1820s to the early 1840s, when it was considered to enhance a high forehead, and by the 1850s, it had fallen out of fashion.[2]