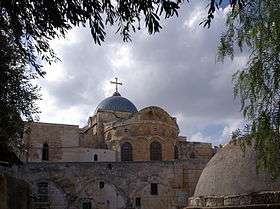 The Church of the Holy Sepulchre in Jerusalem - a centre of pilgrimage long shared and disputed between the Roman Catholic, Eastern Orthodox, and Oriental Orthodox churches.

Catholic–Orthodox ecclesiastical differences are differences between the organizational structure and governance of the Eastern Orthodox Church and that of the Roman Catholic Church. These are distinguished from theological differences which are differences in dogma and doctrine. A number of disagreements over matters of Ecclesiology developed slowly between the Western and Eastern wings of the State church of the Roman Empire centred upon the cities of Rome (considered to have "fallen" in 476) and New Rome/Constantinople (c.330-1453) respectively. The disputes were a major factor in the formal East-West Schism between Pope Leo IX and Patriarch Michael I in 1054 and are largely still unresolved between the churches today.

A lot of the issues that currently separate the two churches are ecclesiastical. Principal among them is the content of papal primacy within any future unified church. The Orthodox insist that it should be a "primacy of honor", as in the ancient church and not a "primacy of authority",[1] whereas the Catholics see the pontiff's role as requiring for its exercise power and authority the exact form of which is open to discussion with other Christians.[2]

The declaration of Ravenna in 2007 re-asserted these beliefs, and re-stated the notion that the bishop of Rome is indeed the protos ("first" in Greek), although future discussions are to be held on the concrete ecclesiastical exercise of papal primacy. Hierarchs within the Russian Church have condemned the document and reassert that Papal authority as is held in the West is not historically valid.[3][4] As the Orthodox view of the Papacy would be Primus inter pares without power of jurisdiction.[5][6]

A canonical territory is a geographical area seen as belonging to a particular patriarchate or autocephalous Church as its own. The concept is found not only in the Eastern Orthodox Church, but also in the Roman Catholic Church, and is mentioned extensively in the Code of Canons of the Eastern Churches.[7]

The issue of canonical territory has proven to be a significant point of dispute in Russia, with the Moscow Patriarchate being opposed on one hand to the influence of the Patriarch of Constantinople in Ukraine, and on the other to perceived Roman Catholic influence within Russia itself.[8]

Celibacy of the priestly order

Celibacy of the clergy is also a dividing point. Although the Catholic Church does allow married men to be ordained in the Eastern Catholic Churches, it does so only rarely in the Western Church.[9] Celibacy is based on the notion that the priest is In persona Christi and that Jesus-Christ was himself celibate all his life. However this is not a doctrinal matter for the Catholic Church, and the rule of celibacy was gradually introduced in the early medieval period.

The Catholic Church's practice of not allowing married men to become priests is not a tradition in Eastern Christianity. In Eastern Orthodoxy, priests cannot marry after ordination,[10][11][12] but married men may become parish priests. Unmarried and widowed clergy in Eastern Orthodoxy are most important to the ascetic community. Also, higher level clergy are chosen solely from unmarried or widowed (for positions like Bishops and above for example).

Cardinal Lubomyr Husar, head of the Ukrainian Greek Catholic Church, which has married as well as celibate clergy, has said that neither the numbers nor the quality of the clergy of the Latin Church would be automatically advanced by abolishing its rule of celibacy.[13]

A major sticking point was the style of church government. The Orthodox Church has always maintained the position of collegiality of the bishops. The Orthodox Church has also emphasised 'economia', or a certain amount of flexibility in the rules depending upon the exigencies of a particular situation. The administrative structure of the Orthodox church is closer to a confederacy in structure with no functioning centralization as a constant.

The Orthodox do have synods where the highest authorities in each Church community are brought together, but unlike the Pope in Roman Catholicism no central individual or figure has the absolute (and "infallible") last word on church doctrine and administration. In practice, this has sometimes led to divisions among Greek, Russian, Bulgarian and Ukrainian Orthodox churches, as no central authority can serve as a rallying point for various internal disputes.

However, in contrast to the picture presented by the Russian religious poet Aleksey Khomyakov more than a century earlier,[14] the Roman Catholic Church's Second Vatican Council reasserted the importance of collegiality, clarifying that "primatial authority is inseparable from collegiality and synodality" and that "the Bishop of Rome is a brother among brothers who are sacramentally all equal in the episcopate.[15]

At a meeting in Balamand, Lebanon in June 1993, the Joint International Commission for the Theological Dialogue between the Roman Catholic Church and the Orthodox Church[16] declared that these initiatives that "led to the union of certain communities with the See of Rome and brought with them, as a consequence, the breaking of communion with their Mother Churches of the East ... took place not without the interference of extra-ecclesial interests";[17] and that:

At the same time, the Commission stated:

Because the Catholic Church respects their celebration of the Mass as a true sacrament, intercommunion with the Eastern Orthodox in "suitable circumstances and with Church authority" is both possible and encouraged.[19] The Catholic Church allows its clergy to administer the sacraments of Penance, the Eucharist and Anointing of the Sick to members of the Eastern Orthodox Church, if these spontaneously ask for the sacraments and are properly disposed.[20] It also allows Catholics who cannot approach a Catholic minister to receive these three sacraments from clergy of the Eastern Orthodox Church, whenever necessity requires or a genuine spiritual advantage commends it, and provided the danger of error or indifferentism is avoided.[21] Catholic canon law allows marriage between a Catholic and an Orthodox only if permission is obtained from the Catholic bishop.[22]

The Code of Canons of the Eastern Churches authorizes the local Catholic bishop to permit a Catholic priest, of whatever rite, to bless the marriage of Orthodox faithful who being unable without great difficulty to approach a priest of their own Church, ask for this spontaneously.[23] In exceptional circumstances Catholics may, in the absence of an authorized priest, marry before witnesses. If a priest who is not authorized for the celebration of the marriage is available, he should be called in, although the marriage is valid even without his presence.[24] The Code of Canons of the Eastern Churches specifies that, in those exceptional circumstances, even a "non-Catholic" priest (and so not necessarily one belonging to an Eastern Church) may be called in.[25]