The Ersu language proper (Chinese: 尔苏; Eastern Ersu) is a Qiangic language spoken in western Sichuan, China. It is the most widely spoken of the three Ersu languages. There are 13,000 speakers according to Sun (1982).

Ersu is currently categorized as a member of the southern subgroup of the Qiangic branch within the Sino- Tibetan language family, though there is debate over the classification due to the lack of information about the language history and the precise criteria underlying the grouping not being specified.

There is generally few written records available in Ersu, therefore not much is known about the history of the people who spoke it. While it has been theorized that the Ersu people moved from Tibet, or were from neighbouring ethnic groups such as the Yi, there is some evidence that the Ersu predated even the Yi in settlement in that area. The Yi people who moved during the Tang Dynasty to the regions near where the Ersu resided documented the Ersu as "the aboriginals". Therefore, it is argued that the Ersu people's settlement in the place they can be found now must be no later than the beginning of the Tang Dynasty.

Most of the early Ersu people could not read or write since there are no written scripts to represent their vernacular language. The only ones who were literate were the religious practitioners called "Shaba".

Shaba were believed to "know everything in the sky above and the earth underneath", and possessed magical powers that allowed them to chant scriptures to call for rain or curse the enemies of the Ersu. They are still active in the Ersu communities to the present day. They are always present at important events such as festivals, weddings, and funerals.

They are also important most likely because they were the only group of people who were able to read the only form of written script found in Ersu history. It is currently known as Shaba pictographic script. The not much is known about the script, only that it used to be only taught from father to son ( not daughter) in a Shaba family. Now, there are less than 10 people who can read the script and much fewer who can understand it in the region.

There are about 200 independent Shaba characters which are not directly linked to the Ersu people's spoken language, and one character may correspond with one or more syllables. Often it may take several lines of words to explain one character. Each aspect of the "picture" would convey a meaning. Different animals would usually indicate different months or dates. Colors also conveyed meaning. They often matched the "five elements" as follows: metal is dark, wood is green, water is dark grey, fire is red, and earth is yellow.

The following table shows the phonological system of speakers of about age 50 and younger. All the sounds represented below are word initial except the nasals, which can also occasionally be used as an independent syllable. 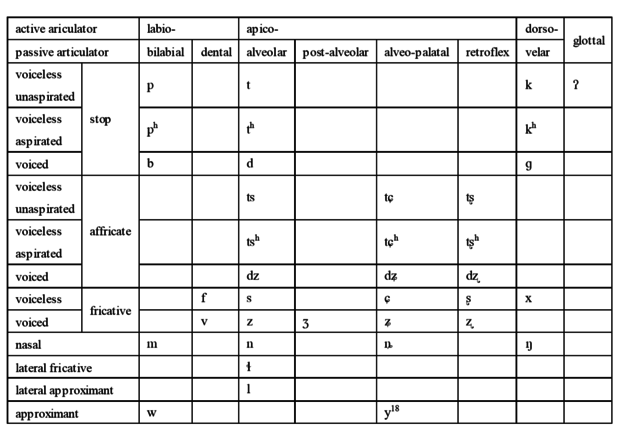 There is also some restrictions on what vowels the cluster initials can precede and are generally more limited than the number of vowels that the simple consonants can precede. 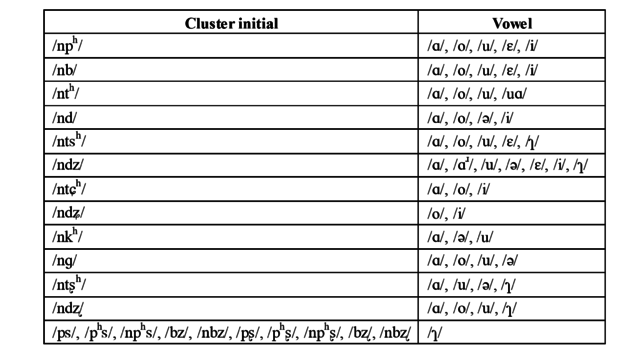 More on allophones of these consonants can be found in Zhang, S.'s 2013 dissertation.

There are also six diphthongs, three rising and three falling. The three rising diphthongs are /iɛ/, /iɑ/ and /uɑ/. The three falling diphthongs end with a less prominent front vowel /i/, but begin with a more prominent vowel. They are: /ui/, /ɛi/, and /ɑi/. All of the diphthongs besides /uɑ/ are not frequently found in Ersu, only in a few individual words. /uɑ/ is found in a large number of words, following a variety of consonant initials such as /kh/, /k/, /n/, /ŋ/, /l/, /tsh/, /ʂ/, and /x/.

/uɑo/ is the only triphthong found in Ersu, and only to exist in one word [zuɑo] 'bowl'.

Often a syllable can be simply V or C. The vowels /ɑ/, /ɑɹ/ and /əɹ/ can function as a syllable V. Nasals /m/, /n/, and /ŋ/ can also form independent syllables as C, however they are much rarer.

Lastly, there is the NCV pattern, which refers to nasalized syllables, where the N stands for a nasal /n/ or /m/. The rest of the structure is the same as the basic CV structure above.

The tone bearing unit is a syllable, and each syllable is obligatorily assigned a tone. There are two tones with contrastive minimal pairs found in Ersu; high level, and mid level. The assignment of the tones in a particular morpheme or word is unpredictable, though data suggests that the high level tone is much more frequent than the mid level tone. The pitch contour of the Ersu tones is also much less stable/consistent compared to Mandarin Chinese, and often have contextual variation.

Below is an example of the contrastive minimal pairs of words with tonal differences. [`] marks the mid level tone, and nothing marks the high level tone. 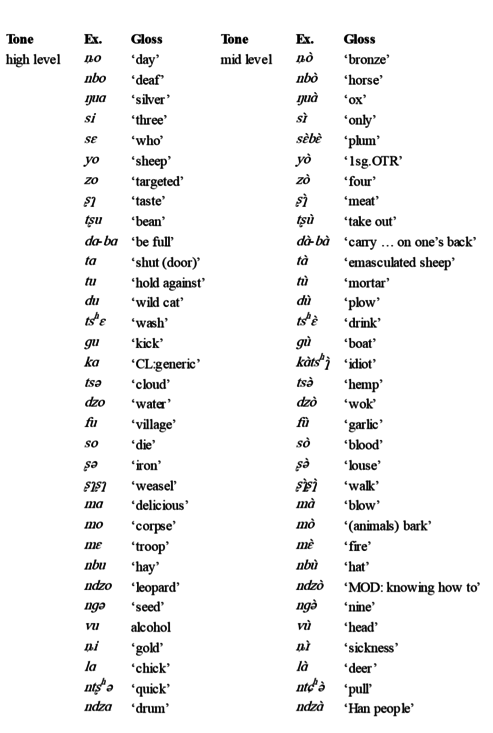 There is strong evidence that Tibetan and Yi words have been borrowed into Ersu without adaptation. Some of the words have exactly the same pronunciation as the Tibetan or Yi words. There is some contention as to whether or not this is good enough evidence to say that Ersu people belong to the Tibetan nationality.

There is also a large amount of Mandarin words borrowed into the Ersu language. These words mainly come from the dialect in Mandarin that carries the tone systems of Southwestern Mandarin varieties, henceforth referred to as "Mandarin". According to Zhang, the majority of Mandarin loanwords occur in the texts relevant to modern times such as long conversations, procedural and autobiographical narratives. In a historical context, Mandarin is hardly seen, even as late as the 1980s.

Nouns in Ersu are either monomorphemc or compounded and can be derived from verbs or verb phrases through nominialization. Nominalizers come in the form of markers on words such as the agentive marker=su, purposive marker=li, temporal/locative marker=ʂə`, and the instrumental/locative marker= ta. Many kinship terms and directional terms take an ɑ-prefix. They may also bear case markers such as the gentative marker=yɪ, accusative marker= vɑ, comitative marker =phɛ, etc. Finally there are six relator nouns found in Ersu that follow a head noun and denote either locative or temporal concepts. There are ten cardinal numerals 1-10 and the remainder being compound numerals. Unlike many other languages, Ersu does not have a "zero".

Compound numerals are formed for those numbers larger than ten. However, it is not just the sum of the cardinal numbers together to form the larger numbers. 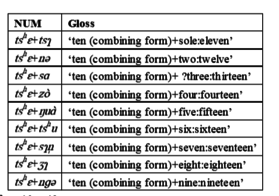 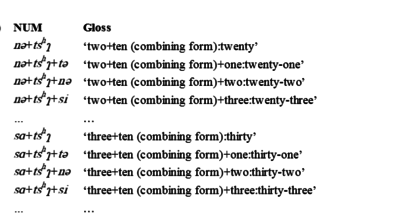 6. Liu, H. (1982). An outline of the Ersu language. In 15th International Conference on Sino-Tibetan Languages and Linguistics.