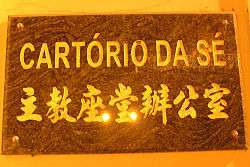 Macanese Portuguese (Portuguese: Português macaense) is a Portuguese dialect spoken in Macau, where Portuguese is co-official with Cantonese. Portuguese is the first language of roughly 3% of the population, while 7% claim fluency.[2] It is distinct from the Macanese language (or Patuá), a Portuguese Creole in Macau.

Macau had its first contact with the Portuguese language in 1557 when the territory was established as a trade center of Portugal to other parts of Asia. The language largely entered Macau in the 19th century when China ceded Macau to Portugal and Macau was declared a formal Portuguese province. At that time, it was made an official language along with Cantonese. Currently, there is only one school in Macau where Portuguese is the medium of instruction, the Macau Portuguese School.

Portugal returned Macau to China in 1999, but Portuguese remained an official language. There has been an increase in the teaching of Portuguese owing to the growing trade links between China and lusophone nations such as Portugal, Brazil, Angola, Mozambique, and East Timor, with 5,000 students learning the language.[3]

The Macanese dialect is traditionally an Old Portuguese variety, in some aspects similar to Brazilian Portuguese in pronunciation. For example, the word pôde is pronounced [ˈpodʒi] in most part of Brazil but [ˈpoðɨ] in Standard European Portuguese. The only Portuguese-medium school teaches Standard European Portuguese, as with most of the CPLP. There are still some phonological differences affected by Cantonese phonology made by those who speak Portuguese as a second language, such as a non-rhotic accent: final /r/ is dropped, as in African Portuguese and most Brazilian dialects and [ʒ] is devoiced to [ʃ]. These phonological differences do not apply to Chinese who have higher education in Portuguese.

Vocabulary is the same as in Portugal and Brazil, but there are some differences due to Cantonese influence. Macau Portuguese also borrowed words from Malay and other Indo-European languages like Sinhalese, Konkani, and Marathi languages from the beginning as the Portuguese settlers often married women from Portuguese Malacca, Portuguese India, and Portuguese Ceylon rather than from neighboring China. In the 17th century it was further influenced by the influx of immigrants from other Portuguese colonies in Asia, especially from Portuguese Malacca, Indonesia, and Portuguese Ceylon, that had been displaced by the Dutch expansion in the East Indies, and Japanese Christian refugees. These include tim sam, dim sum; "goh lor", goh low and ; "shu tiu", si tiu. It reached to countries and regions where Portuguese is spoken, especially Portugal where it was brought by Portuguese returnees and some Chinese and Macanese (who are loyal to them) who brought Chinese and Macanese culture. Vocabulary even went to Brazil through leaving Portuguese settlers with some Macanese and Chinese settlers.