The E language's unusual pinyin-transliterated name, which is also an autonym, consists of a single letter e.[3] The character, which is written "诶" in Simplified Chinese and "誒" in Traditional Chinese, usually denotes an expression of affirmation.[4] The language's speakers also refer to their language as Kjang E.[3] Wusehua is a derogatory name for E.[5] 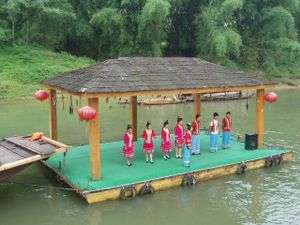 In 1992, E was spoken by about 30,000 people,[3] but by 2008 this number had dwindled to 9,000.[6] Most E speakers are classified as Zhuang by the Chinese government. E speakers live primarily in the Guangxi autonomous region of China, specifically in the Rongshui Miao county and border areas of Luocheng Mulao. Villages inhabited by E speakers include Xiatan, Simo, Xinglong, and the Yonglei district. Ethnologue classifies E as rank 6b (Threatened). E speakers' most commonly spoken other languages are Yue Chinese and the Guiliu variant of Southwestern Mandarin.[7]

E's consonant and vowel inventories are mostly similar to those of its parent languages. However, it contains a few unusual consonants: the voiceless nasal consonants [n̥], [ŋ̥], [m̥], and the voiceless alveolar lateral approximant [l̥]. All are voiceless versions of consonants that, in most languages, are always voiced. E allows syllabic consonants and diphthongs.[6]

Like most Southeast Asian languages, including Tai and the varieties of Chinese, E is tonal.[8] The language is described as having seven tones, with the seventh varying allophonically with the length of the vowel it is attached to. With numbers ranging from 1 to 5, with 1 being the lowest tone and 5 the highest, the contours of the various tones in E are as follows.[6]

E is usually classified as a mixed language deriving ultimately from the Tai-Kadai and Sino-Tibetan families, which both inhabit southern China and Southeast Asia.[5] Some non-Chinese scholars, however, consider it a Tai-Kadai language with Chinese influence.[9] Whatever its classification, the grammar resembles that of the Tai branch of Tai-Kadai. Specifically, scholars consider E's grammatical features a blend of Northern Zhuang, Mulam, and Kam.[7][8] The Caolan language of Vietnam displays many similarities with E.[8]

The vocabulary, however, is mostly Chinese, based on Guiliu and the Tuguai variant of Pinghua.[7][8] Out of the 2,000 most commonly used E words, only about 200 are of Tai-Kadai origin.[10] E also inherits elements of these Chinese dialects' phonology and compound word formation.[7] E morphology is primarily analytic, with concepts such as negation expressed with auxiliary words (pat6, m2) and no pronominal agreement.[6]

In its pronouns, E distinguishes for person between first, second, and third; in number between singular and plural; and, in the case of the second-person plural, between inclusive and exclusive we. E does not, however, make distinctions for grammatical gender.[6]