Nuosu (or Nosu) (Nuosu: ꆈꌠ꒿ Pronunciation: Nuosuhxop), also known as Northern Yi, Liangshan Yi, and Sichuan Yi, is the prestige language of the Yi people; it has been chosen by the Chinese government as the standard Yi language (in Mandarin: Yí yǔ, 彝語/彝语) and, as such, is the only one taught in schools, both in its oral and written forms. It is spoken by two million people and is increasing; 60% are monolingual. Nuosu is the native Nuosu/Yi name for their own language and is not used in Mandarin Chinese; although it may sometimes be spelled out for pronunciation (nuòsū yǔ 诺苏语/諾蘇語), the Chinese characters for nuòsū have no meaning.[3]

Nuosu is one of several often mutually unintelligible varieties known as Yi, Lolo, Moso, or Noso; the six Yi languages recognized by the Chinese government hold only 25% to 50% of their vocabulary in common. They share a common traditional writing system, though this is used for shamanism rather than daily accounting.

The Yellow Yi (黄彝) of Kunming, central Yunnan, who call themselves Nisu, also speak a Northern Yi dialect (Bradley 2005). The Yellow Yi had originally migrated from Sichuan, and live in 4 villages in northwestern Fumin County (endangered) and 1 village in northwestern Anning County (moribund, highly endangered).[5] It is most closely related to Suondi Yi (Bradley 2005).

According to Bradley (1997),[6] there are 3 main dialects of Nosu, of which the Southeastern one (Sondi) is most divergent.

Chen (2010) lists the following dialects of Nosu. Also listed are the counties where each respective dialect is spoken.

Classic Yi is a syllabic logographic system of 8,000–10,000 glyphs. Although similar to Chinese in function, the glyphs are independent in form, with little to suggest a direct relation.

The Modern Yi script (ꆈꌠꁱꂷ nuosu bburma [nɔ̄sū bʙ̝̄mā] 'Nosu script') is a standardized syllabary derived from the classic script in 1974 by the local Chinese government. It was made the official script of the Yi languages in 1980. There are 756 basic glyphs based on the Liangshan dialect, plus 63 for syllables only found in Chinese borrowings.

In 1958 the Chinese government had introduced a Roman-based alphabet for use in Yi, based on the romanized script of Gladstone Porteous of Sayingpan.[7] (This was later replaced by the Yi script.) 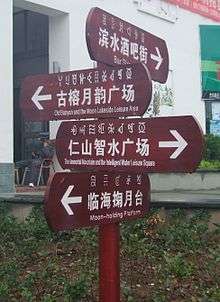 The written equivalents of the phonemes listed here are "Yi Pinyin". For information about the actual script used see the section above entitled Writing System.

Nuosu has five pairs of phonemic vowels, contrasting in a feature Eatough calls loose throat vs. tight throat. We use underlining as an ad-hoc symbol for tight throat; phonetically, these vowels are laryngealized and/or show a retracted tongue root. Loose vs. tight throat is the only distinction in the two pairs of syllabic consonants, but in the vocoids it is reinforced by a height difference.

The syllabic consonants y(r) u(r) are essentially the usual Sinological vowels ɿ ʮ, so y can be identified with the vowel of the Mandarin 四 sì "four", but they have diverse realizations. Y(r) completely assimilates to a preceding coronal except in voice, e.g. /ɕz̩˨˩/ [ɕʑ̩˨˩] "to marry", and are [m͡l̩] after a labial nasal, e.g. /m̥z̩˧sz̩˧/ [m̥m͡l̩˧sz̩˧] "cloth". U(r) assimilates similarly after laterals, retaining its rounding, e.g. /l̥v̩ʷ˧/ [l̥l̩ʷ˧] "to stir-fry", and is [m̩ʷ] after a labial nasal, e.g. /m̥v̩ʷ˧/ [m̥m̩ʷ˧] "mushroom"; moreover it induces a labially trilled release of preceding labial or alveolar stops, e.g. /ⁿdv̩ʷ˨˩/ [ⁿdʙv̩ʷ˨˩] "to hit".

The tight-throat phone [ɤ̝] occurs as the realization of /ɤ̝/ in the high tone. That it is phonemically loose-throat is shown by its behaviour in tightness harmony in compound words.

The high-mid tone is only marginally contrastive. Its two main sources are from tone sandhi rules, as the outcome of a mid tone before another mid tone, and the outcome of a low-falling tone after a mid tone. However, these changes do not occur in all compounds where they might: for instance wo "bear" + mop "mother" regularly forms wo mox "female bear", but vi "jackal" + mop "mother" forms vi mop "female jackal" without sandhi. The syntax creates other contrasts: tone sandhi applies across the boundary between object and verb, so is present in SOV clauses like mu jy lu ti shex "Mujy looks for Luti", but is absent in OSV clauses like mu jy lu ti shep "Luti looks for Mujy". A few words, like xix "what?", have underlying high-mid tone.