Not to be confused with Nagovisi language.

The Xibe language (ᠰᡞᠪᡝ ᡤᡞᠰᡠᠨ sibe gisun, also Sibo, Sibe, Xibo language) is the most widely spoken of the Tungusic languages spoken by members of the ethnic group in Xinjiang, in the northwest of the People's Republic of China.

Xibe is conventionally viewed as a separate language within the southern group of Tungusic languages, alongside the more well-known Manchu language, having undergone more than 200 years of development separated from the Tungusic-speaking heartland since Xibe troops were dispatched to the Xinjiang frontiers in 1764. Some researchers such as Jerry Norman hold that Xibe is a dialect of Manchu, whereas other Xibologists, such as An Jun, argue that Xibe should be considered the "successor" to Manchu. Ethnohistorically, the Xibe people are not considered Manchu people, because they were excluded from chieftain Nurhaci's 17th-century tribal confederation to which the name "Manchu" was later applied.[5]

Xibe is mutually intelligible with Manchu,[6] although unlike Manchu, Xibe is reported to have eight vowel distinctions as opposed to the six found in Manchu, as well as differences in morphology, and a more complex system of vowel harmony.[7]

Xibe has 7 case morphemes, 3 of which are used quite differently from modern Manchu. The categorization of morphemes as case markers in spoken Xibe is partially controversial due to the status of numerous suffixes in the language. Despite the general controversy about the categorization of case markers versus postpositions in Tungusic languages, 4 case markers in Xibe are shared with literary Manchu (Nominative, Genitive, Dative-Locative and Accusative). Xibe's 3 innovated cases, the ablative, lative and instrumental-sociative share their meanings with similar case forms in neighboring Uyghur, Kazakh and Oiryat Mongolian.[8]

The general vocabulary and structure of Xibe has not been affected as much by Chinese as Manchu has. However, Xibe has absorbed a large body of Chinese sociological terminology, especially in politics: like gəming ("revolution", from 革命) and zhuxi ("chairperson", from 主席),[9] and economics: like chūna ("cashier", from 出纳) and daikuan ("loan", from 贷款). Written Xibe is more conservative and rejecting of loanwords, but spoken Xibe contains additional Chinese-derived vocabulary such as nan (from 男) for "man" where the Manchu-based equivalent is niyalma.[5] There has also been some influence from Russian,[10] including words such as konsul ("consul", from консул) and mashina ("sewing machine", from машина).[5] Smaller Xinjiang languages contribute mostly cultural terminology, such as namas ("an Islamic feast") from Uygur and baige ("horse race") from Kazakh.[5]

There was a proposal in China by 1957 to adapt the Cyrillic alphabet to Xibe, but this was abandoned in favor of the original Xibe script.[11]

This lists the letters in Xibe that differentiate it from Manchu as well as the placement of the letters. Red are important differences. 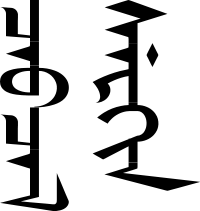 In 1998, there were eight primary schools that taught Xibe in the Qapqal Xibe Autonomous County, where the medium of instruction is Chinese but Xibe lessons are mandatory. From 1954 to 1959, the People's Publishing House in Ürümqi has published over 285 significant works, including government documents, belles-lettres, and school books, in Xibe.[5] Since 1946, the Xibe-language Qapqal News has been published in Yining. In Qapqal, Xibe-language programming is allocated 15 minutes per day of radio broadcasting and 15 to 30-minute television programmes broadcast one or twice per month.[12]

Xibe is taught as a second language by the Ili Normal University in the Ili Kazakh Autonomous Prefecture of northern Xinjiang; they established an undergraduate major in the language in 2005.[13] A few Manchu language enthusiasts from Eastern China have visited Qapqal Xibe County in order to experience an environment where a variety closely related to Manchu is spoken natively.[14]