Min or Miin[lower-alpha 1] (simplified Chinese: 闽语; traditional Chinese: 閩語; pinyin: Mǐn yǔ; Pe̍h-ōe-jī: Bân gú; BUC: Mìng ngṳ̄) is a broad group of Chinese varieties spoken by over 70 million people in the southeastern Chinese province of Fujian as well as by migrants from this province in Guangdong (around Chaozhou-Swatou, or Chaoshan area, Leizhou peninsula and Part of Zhongshan), Hainan, three counties in southern Zhejiang, Zhoushan archipelago off Ningbo, some towns in Liyang, Jiangyin City in Jiangsu province, and Taiwan. The name is derived from the Min River in Fujian. Min varieties are not mutually intelligible with any other varieties of Chinese.

There are many Min speakers among overseas Chinese in Southeast Asia. The most widely spoken variety of Min outside Fujian is Hokkien (which includes Taiwanese and Amoy).

The Min homeland of Fujian was opened to Chinese settlement by the defeat of the Minyue state by the armies of Emperor Wu of Han in 110 BC.[1] The area features rugged mountainous terrain, with short rivers that flow into the South China Sea. Most subsequent migration from north to south China passed through the valleys of the Xiang and Gan rivers to the west, so that Min varieties have experienced less northern influence than other southern groups.[2] As a result, whereas most varieties of Chinese can be treated as derived from Middle Chinese, the language described by rhyme dictionaries such as the Qieyun (601 AD), Min varieties contain traces of older distinctions.[3] Linguists estimate that the oldest layers of Min dialects diverged from the rest of Chinese around the time of the Han dynasty.[4][5] However, significant waves of migration from the North China Plain occurred:[6] 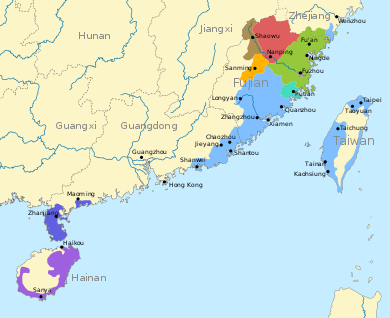 Min dialect groups according to the Language Atlas of China:

Min is usually described as one of seven or ten groups of varieties of Chinese but has greater dialectal diversity than any of the other groups. The varieties used in neighbouring counties, and in the mountains of western Fujian even in adjacent villages, are often mutually unintelligible.[12]

Early classifications, such as those of Li Fang-Kuei in 1937 and Yuan Jiahua in 1960, divided Min into Northern and Southern subgroups.[13][14] However, in a 1963 report on a survey of Fujian, Pan Maoding and colleagues argued that the primary split was between inland and coastal groups. A key discriminator between the two groups is a group of words that have a lateral initial /l/ in coastal varieties, and a voiceless fricative /s/ or /ʃ/ in inland varieties, contrasting with another group having /l/ in both areas. Norman reconstructs these initials in Proto-Min as voiceless and voiced laterals that merged in coastal varieties.[14][15]

Pan and colleagues divided the coastal varieties into three groups:[21]

Pan and colleagues divided the inland varieties into two groups:[21]

When using Chinese characters to write a non-Mandarin form, standard practice is to use characters that correspond etymologically to the words being represented, and to invent new characters for words with no evident ancient Chinese etymology or in some cases for alternative pronunciations of existing characters, especially when the meaning is significantly different. Written Cantonese has carried this process out to the farthest extent of any non-Mandarin variety, to the extent that pure Cantonese vernacular can be unambiguously written using Chinese characters. Contrary to popular belief, a vernacular written in this fashion is not in general comprehensible to a Mandarin speaker, due to significant changes in grammar and vocabulary and the necessary use of large number of non-Mandarin characters.

A similar process has never taken place for any of the Min varieties and there is no standard system for writing Min, although some specialized characters have been created. Given that Min combines the Chinese of several different periods and contains some non-Chinese vocabulary, one may have trouble finding the appropriate Chinese characters for some Min vocabulary. In the case of Taiwanese, there are also indigenous words borrowed from Formosan languages, as well as a substantial number of loan words from Japanese. The Min spoken in Singapore and Malaysia has borrowed heavily from Malay and, to a lesser extent, from English and other languages. The result is that cases of Min written purely in Chinese characters does not represent actual Min speech, but contains a heavy mixture of Mandarin forms.