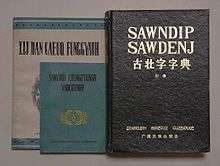 Standard Zhuang (autonym: Zhuang: Vahcuengh (pre-1982: Vaƅcueŋƅ; Sawndip: 话壮); simplified Chinese: 壮语; traditional Chinese: 壯語; pinyin: Zhuàngyǔ) is the official standardized form of the Zhuang languages, which are a branch of the Northern Tai languages. Its pronunciation is based on that of the Yongbei Zhuang dialect of Shuangqiao, Guangxi in Wuming District, Guangxi with some influence from Fuliang, also in Wuming District,[3] while its vocabulary is based mainly on northern dialects. The official standard covers both spoken and written Zhuang. It is the national standard of the Zhuang languages, though in Yunnan a local standard is used.[4][5]

The sentence Son mwngz hwnj max gvaq dah "Teach you to climb on a horse to cross a river" is often used to help people remember the six tones.

(In the tables above the 1982 version is in green)

Standard Zhuang is an artificial mixture of several Zhuang languages. The lexicon is based on various Northern Zhuang dialects. The phonology is essentially that of Shuangqiao, with the addition of ny, ei, ou from Fuliang, both located in Wuming County. Zhang (1999), along with other Chinese scholars, classifies Shuangqiao dialect as Northern Tai (Northern Zhuang),[6] while Pittayaporn (2009) places it outside of Northern Tai proper, though closely related to it.[7] (See Tai languages#Pittayaporn (2009).) Shuangqiao was chosen for the standard pronunciation in the 1950s because it was considered to be Northern Zhuang but with characteristics of Southern Zhuang.

Standard Zhuang is used most frequently in domains where written Zhuang was previously seldom used, such as newspapers, translations of communist literature[8] and prose. It is one of the official languages of China that appears on bank notes; all Chinese laws must be published in it, and it is used for bilingual signs. Whilst used for adult literacy programs, it is currently only taught in a very small percent of primary and secondary schools in Zhuang-speaking areas. In less formal domains the traditional writing system Sawndip is more often used[9] and for folk songs Sawndip remains the predominant genre with most standard Zhuang versions being based on Sawndip versions.

While Standard Zhuang is largely pronounced as Shuangqiao Wuming dialect, there is a degree of purposeful dialect mixture in vocabulary: 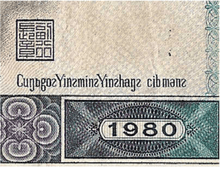 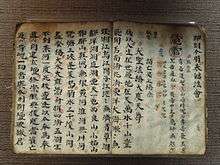 In 1957 the People's Republic of China introduced an alphabetical script for the newly standardized Zhuang language. The alphabet included a mixture of modified Cyrillic and IPA letters. A spelling reform in 1982 replaced both the Cyrillic and IPA letters with Latin letters to facilitate printing and computer use.[11] These alphabetical scripts are part of Standard Zhuang.

The Old Zhuang script, Sawndip, is a Chinese character–based writing system, similar to Vietnamese chữ nôm. Some Sawndip logograms were borrowed directly from Chinese, while others were created from the existing components of Chinese characters. Sawndip has been used for over one thousand years for various Zhuang dialects. Unlike Chinese, Sawndip has never been standardized, and authors may differ in their choices of characters, or spelling and is not currently part of the official writing system.

First article of the Declaration of Human Rights.