"Exorcise" redirects here. It is not to be confused with Exercise. 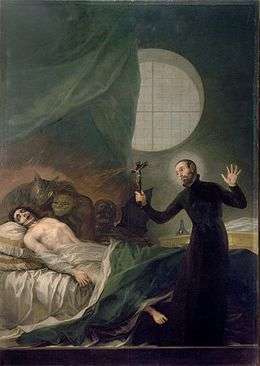 Painting of Saint Francis Borgia performing an exorcism, by Goya

Exorcism (from Greek ἐξορκισμός, exorkismos – binding by oath) is the religious or spiritual practice of purportedly evicting demons or other spiritual entities from a person or an area they are believed to have possessed.[1] Depending on the spiritual beliefs of the exorcist, this may be done by causing the entity to swear an oath, performing an elaborate ritual, or simply by commanding it to depart in the name of a higher power. The practice is ancient and part of the belief system of many cultures and religions.

Requested and performed exorcisms had begun to decline in the United States by the 18th century and occurred rarely until the latter half of the 20th century when the public saw a sharp rise due to the media attention exorcisms were getting. There was “a 50% increase in the number of exorcisms performed between the early 1960s and the mid-1970s”.[2]

In Christianity, exorcism is the practice of casting out demons. In Christian practice the person performing the exorcism, known as an exorcist, is often a member of the Christian Church, or an individual thought to be graced with special powers or skills. The exorcist may use prayers and religious material, such as set formulas, gestures, symbols, icons, amulets, etc. The exorcist often invokes God, Jesus and/or several different angels and archangels to intervene with the exorcism. A survey of Christian exorcists found that most exorcists believe that any mature Christian can perform an exorcism, not just members of clergy. Christian exorcists most commonly believe the authority given to them by the Father, Son, and Holy Spirit (the Trinity) is the source of their ability to cast out demons.[3]

In general, people considered to be possessed are not regarded as evil in themselves, nor wholly responsible for their actions, because possession is considered to be unwilling manipulation by a demon resulting in harm to self or others. Therefore, practitioners regard exorcism as more of a cure than a punishment. The mainstream rituals usually take this into account, making sure that there is no violence to the possessed, only that they be tied down if there is potential for violence.[4]

In Catholic Christianity, exorcisms are performed in the name of Jesus Christ.[5] A distinction is made between a formal exorcism, which can only be conducted by a priest during a baptism or with the permission of a Bishop, and "prayers of deliverance" which can be said by anyone.

The Catholic rite for a formal exorcism, called a "Major Exorcism", is given in Section 11 of the Rituale Romanum.[6][7] The Ritual lists guidelines for conducting an exorcism, and for determining when a formal exorcism is required.[8] Priests are instructed to carefully determine that the nature of the affliction is not actually a psychological or physical illness before proceeding.[5]

In Catholic practice the person performing the exorcism, known as an exorcist, is an ordained priest. The exorcist recites prayers according to the rubrics of the rite, and may make use of religious materials such as icons and sacramentals. The exorcist invokes God—specifically the Name of Jesus—as well as members of the Church Triumphant and the Archangel Michael to intervene with the exorcism. According to Catholic understanding, several weekly exorcisms over many years are sometimes required to expel a deeply entrenched demon.[8][9]

In general, possessed persons are not regarded as evil in themselves, nor wholly responsible for their actions.[10] Therefore, practitioners regard exorcism as a cure and not some kind of punishment. The Catholic rite usually take this into account, ensuring that there is no violence to those possessed, only that they be tied down if deemed necessary for their own protection and that of the practitioners.[4] 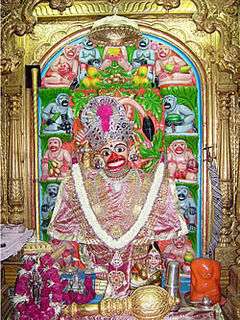 Beliefs and practices pertaining to the practice of exorcism are prominently connected with Hindus. Of the four Vedas (holy books of the Hindus), the Atharva Veda is said to contain the secrets related to exorcism,[12] magic and alchemy.[13][14] The basic means of exorcism are the mantra and the yajna used in both Vedic and Tantric traditions. Vaishnava traditions also employ a recitation of names of Narasimha and reading scriptures, notably the Bhagavata Purana aloud.

According to Gita Mahatmya of Padma Purana, reading the 3rd, 7th and 9th chapter of Bhagavad Gita and mentally offering the result to departed persons helps them to get released from their ghostly situation. Kirtan, continuous playing of mantras, keeping scriptures and holy pictures of the deities (Shiva, Vishnu, Hanuman, Brahma, Shakti, etc.) (especially of Narasimha) in the house, burning incense offered during a Puja, sprinkling water from holy rivers, and blowing conches used in puja are other effective practices.. It is also believed that, praying to Lord Hanuman, gives the best result. It is also mentioned in the Hanuman Chalisa. It is believed that just uttering the name of Lord Hanuman makes the evil forces and devils tremble, in fear.

The main puranic resource on ghost and death-related information is Garuda Purana.[15]

A complete description of birth and death and also about the human soul are explained in Katō Upanishad, a part of Yajur Veda. A summary of this is also available as a separate scripture called Kāttakaṃ.

In Islam, exorcism is called ruqya. It is used to repair the damage caused by sihr or black magic. Exorcisms today are part of a wider body of contemporary Islamic alternative medicine called al-Tibb al-Nabawi (Medicine of the Prophet).[16]

Islamic exorcisms consist of the treated person lying down, while a sheikh places a hand on a patient’s head while reciting verses from the Quran, but this is not mandatory.[16] The drinking or sprinkling of holy water (water from the Zamzam Well) may also take place along with applying of clean non-alcohol-based perfumes, called as ittar.[17]

Specific verses from the Quran are recited, which glorify God (e.g. The Throne Verse (Arabic: آية الكرسي Ayatul Kursi)), and invoke God's help. In some cases, the adhan (call for daily prayers) is also read, as this has the effect of repelling non-angelic unseen beings or the jinn.

The Islamic prophet Muhammad taught his followers to read the last three suras from the Quran, Surat al-Ikhlas (The Fidelity), Surat al-Falaq (The Dawn) and Surat an-Nas (Mankind).

In more recent times, Rabbi Yehuda Fetaya authored the book Minchat Yahuda, which deals extensively with exorcism, his experience with possessed people, and other subjects of Jewish thought. The book is written in Hebrew and was translated into English.

Rabbi Gershon Winkler of New Mexico explains that the procedure for a Jewish exorcism is intended not only to drive away the possessing force, but to help both the possessor and the possessed in an act of healing. The Jewish exorcism ritual is performed by a rabbi who has mastered practical Kabbalah. Also present is a minyan (a group of ten adult males), who gather in a circle around the possessed person. The group recites Psalm 91 three times, and then the rabbi blows a shofar (a ram's horn).[19]

The shofar is blown in a certain way, with various notes and tones, in effect to "shatter the body" so that the possessing force will be shaken loose. After it has been shaken loose, the rabbi begins to communicate with it and ask it questions such as why it is possessing the body of the possessed. The minyan may pray for it and perform a ceremony for it in order to enable it to feel safe, and so that it can leave the person's body.[19]

Demonic possession is not a valid psychiatric or medical diagnosis recognized by either the DSM-5 or the ICD-10. Those who profess a belief in demonic possession have sometimes ascribed to possession the symptoms associated with physical or mental illnesses, such as hysteria, mania, psychosis, Tourette's syndrome, epilepsy, schizophrenia or dissociative identity disorder.[20][21][22][23][24][25]

Additionally, there is a form of monomania called demonomania or demonopathy in which the patient believes that he or she is possessed by one or more demons.[26] The illusion that exorcism works on people experiencing symptoms of possession is attributed by some to placebo effect and the power of suggestion.[27][28] Some cases suggest that supposedly possessed persons are actually narcissists or are suffering from low self-esteem and act demonically possessed in order to gain attention.[29]

Within the scientific community, the work of psychiatrist M. Scott Peck, a believer in exorcism, generated significant debate and derision. Much was made of his association with (and admiration for) the controversial Malachi Martin, a Roman Catholic priest and a former Jesuit, despite the fact that Peck consistently called Martin a liar and manipulator.[30][31] Other criticisms leveled against Peck included claims that he had transgressed the boundaries of professional ethics by attempting to persuade his patients to accept Christianity.[30]

One scholar has described psychosurgery as "Neurosurgical Exorcisms", with trepanation having been widely used to release demons from the brain.[32] Meanwhile, another scholar has equated psychotherapy with exorcism.[33]

Exorcism has been a popular subject in fiction, especially horror.