This article is about the Home Rule movement in India. For home rule in general, see Home rule.

The All India Home Rule League was a national political organisation founded in April 1916 to lead the national demand for self-government, termed Home Rule, and to obtain the status of a Dominion within the British Empire as enjoyed by Australia, Canada, South Africa, New Zealand and Newfoundland at the time.

In context of World War I

Most Indians and Indian political leaders had been divided in their response to World War I and the Indian soldiers fighting on behalf of the British Empire against Germany, the Austro-Hungarian Empire and the Ottoman Empire. The latter's involvement irked India's Muslims, who saw the Sultan as the Caliph of Islam.

Many Indian revolutionaries opposed the war, while moderates and liberals backed the war. The issue divided India's political classes and left the increasing demand for self-government going nowhere.

Between 1916 and 1918, when the war was gradually approaching an end, prominent Indians like Joseph Baptista, Muhammad Ali Jinnah, Bal Gangadhar Tilak, G. S. Khaparde, Sir S. Subramania Iyer and the leader of the Theosophical Society, Annie Besant, decided to organise a national alliance of leagues across India, specifically to demand Home Rule, or self-government within the British Empire for all of India. Tilak founded the first League in the city of poona in April 1916 then after this Annie Besant founded second league at Adyar Madras in september 1916. [. With the League's national headquarters in Delhi, the main cities of activity were Bombay (now Mumbai), Calcutta (now Kolkata) and Madras (now Chennai).

The move created considerable excitement at the time, and attracted many members of the Indian National Congress and the All India Muslim League, who had been allied since the 1916 Lucknow Pact. The leaders of the League gave fiery speeches, and petitions with hundreds of thousands of Indians as signatories were submitted to British authorities. Unification of moderates and radicals as well as unity between Muslim League and Indian National Congress was a remarkable achievement of Mrs Annie Besant. Later when government arrested Annie Besant in 1917 the movement actually spread out and made its impact in interior villages of India. The League spread political awareness in new areas like Sindh, Punjab, Gujarat, United Provinces, Central provinces, Bihar, Orissa as well as Madras, which all sought an active political movement.

Difference from the Congress 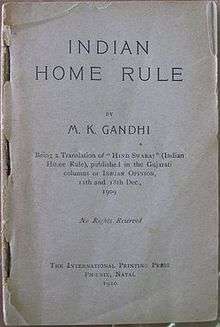 First page of the first edition of the English translation of Gandhi's "Hind Swaraj" - "Indian Home Rule" in translation. The copyright legend on this first edition bears these words: "No Rights Reserved".

Apart from firing up college students, educated Indians and people in the cities, the Leagues elicited little response or enthusiasm from India's masses and the British government. It was often divided upon whether to follow up with public demonstrations, or compromise by contesting elections to the legislative councils that were criticized as little more than rubber stamps for the Viceroy.

Its further growth and activity were stalled by the rise of Mohandas Gandhi and his Satyagraha art of revolution: non-violent, but mass-based civil disobedience. Gandhi's Hindu lifestyle, mannerisms and immense respect for Indian culture and the common people of India made him immensely popular with India's common people. His victories in leading the farmers of Champaran, Bihar and Kheda, Gujarat against the British authorities on tax revolts made him a national hero. Gandhi realized that India was 900,000 villages, not the cities of Bombay, Delhi, Calcutta and Madras. Most of its people were poor, illiterate and farmers, not Western-educated lawyers. After the Montagu Declaration the league agreed to suspend its expansion of the movement. After this the all moderate candidate gave up the membership of league.The league believed that the British government will gradually reform the administration and local representative system by ushering participation of local Indians.

In 1920, the All India Home Rule League elected Mahatma Gandhi as its President. In a year, the body would merge into the Indian National Congress to form a united Indian political front.